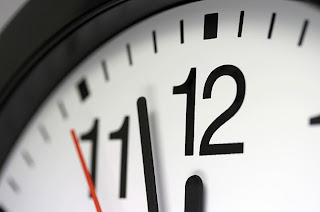 Time, not money, is the most precious commodity you have.  You can make an infinite amount of money, but you only have a finite amount of time on this planet.  Use it wisely!

In Stephen R. Covey's book, Seven Habits of Highly Effective People (Simon & Schuster, 2003), he discusses the concept of Time Bandits - people and things that eat up time during your day and prevent you from getting your work done.

I am not a fan of his book, or these types of "success" books by success Gurus and inspirational speakers. But the basic concept bears some study.

Most Americans lose an inordinate amount of their day to time bandits. In the Covey book, he concentrates on time bandits at work. But I think he misses the real time bandits out there. Yea, the boring IT guy down the hall wastes 15 minutes of your life with stories about his ex-wife. And that's 15 minutes away from work.  But that sort of thing really misses the point - concentrating on minor time-wasters while ignoring the big ones.

Things like Commuting, Television, Lawn Mowing, Cell Phones, and the Surfing the Internet take far more time in people's lives and we think or say nothing of them. And the time these bandits take from us - wholesale - cuts into the real pleasures in life. In addition, these are basically passive activities that involve little or no mental effort on the part of the user.

You have 24 hours in the day. You'll need at least 8 to sleep (including going to bed, getting up, etc.). Your employer demands at least another 8 hours from you. This leaves you a paltry 8 hours a day for your own enjoyment. Like disposable income, your disposable time is a small fraction (1/3 or less) of the overall time you own.

Now bear in mind that of this 8 hours, you maybe have four to really use. For example, you have to use the bathroom, shower, shave, tend to your personal needs. This takes an hour a day at least. And there are meals, which generally can run from 1-3 hours, depending on how much you enjoy a good meal. And then there are tasks like managing your finances or paying the bills. Many folks neglect his in favor of time bandits, or they surreptitiously do it at work, stealing time from their employer.

But the really big time bandits are rarely talked about. These are bandits that take hours out of each day and give nothing in return. And yet we think about them as "necessary" or "unavoidable" time expenses. But are they? Of course not.

Commuting: Probably 90% of the working people in this country commute. The average commute, according to a recent Gallup Poll, the average American spends 48 minutes a day commuting. In the Washington DC area, many folks have much longer commutes than that - typically on the order of an hour to two hours, round trip, particularly with traffic. Of course, no one wants to think they are spending 1/4 of their free time commuting, so I suspect many folks under-report their average trip times.


Television:  I know I harp on this a lot, but the obvious bears repeating again and again, particularly when it is so overlooked by so many.  The average American spends  anywhere from 2.8 hours a day (Bureau of Labor Statistics) to over 8 hours a day per household (A.C. Nielsen) or over 5 hours per day (A.C. Nielsen again).  Based on my experiences with Cable TV, these numbers do not surprise me (wake up with the Today show, come home and watch the news, evening programs, and fall asleep watching Leno).  4-5 hours a day comprises nearly all of your free time outside of work and sleep.  Television is the world's largest time-bandit!

Lawn Mowing and Home Maintenance:  Americans opted for larger and larger houses in the 1990's until today.  Mini-mansions in the suburbs, surrounded by a green sward, became a status symbol for the near-rich.  But these homes come with a cost beyond their funny-money upside-down mortgages.  Those large lawns require mowing, and those six bedrooms and four baths require cleaning.  And those miles of gutters surrounding that faux mansard roof all need to be cleaned, usually 2-3 times a year.  These are either money bandits, as you have to pay illegal immigrants to do all this work, or time bandits, if you do it yourself - at least 5-10 hours a week.  And if you neglect this sort of work, the vaunted mini-Mansion will look like the Munster's house in short order.  Smaller houses, more reasonable sized lawns (or none at all) and less maintenance can be a real time-saver.


Cell Phones: You know the type - usually lower class, but many middle-class people fall for this, too.  On the cell phone all day long, hanging up from one call, only to take another.  They are so busy!  And getting things done!  Or so it appears, at first.  However, serial cell-phoning is just the appearance of action without any real results.  Talking is not "work" and does not produce work product - only more talk.  And texting falls into this category as well - and is often the time-bandit of the more affluent.  We claim we are "saving time" by answering e-mails or communicating "on the go" with our texting devices, thus taking a time bandit (commuting) and making it into "productive" time.  But again, mere communication is not labor.  And much of this communication is unnecessary.  Like gas filling an empty chamber, communication expands to accommodate the bandwidth of the channel.  In the days of the written letter and telegraph, communications were few and far between - but we all made do and did well.  Today, we spend whole days doing nothing but communicating, while getting no work done at all.


Surfing the Internet:  And in this regard, dear reader, surfing the net is another area we need to talk about.  Yes, you are doing it right now, reading this blog.  And arguably, you could say that surfing the net is "educational" in that you learn something by doing it - sometimes useful information (product pricing, technical information) sometimes not (videos of kittens on YouTube).  And again, like the cell phone, many people claim  that using the Internet is essential to their work.  And yet, real work often happens "offline" not while surfing.

Together these combined activities can take up far more time than some boring co-worker at work.  The real time-bandits are often in our own home.
Newer Post Older Post Home