My Guest Appearance on "Car Talk" 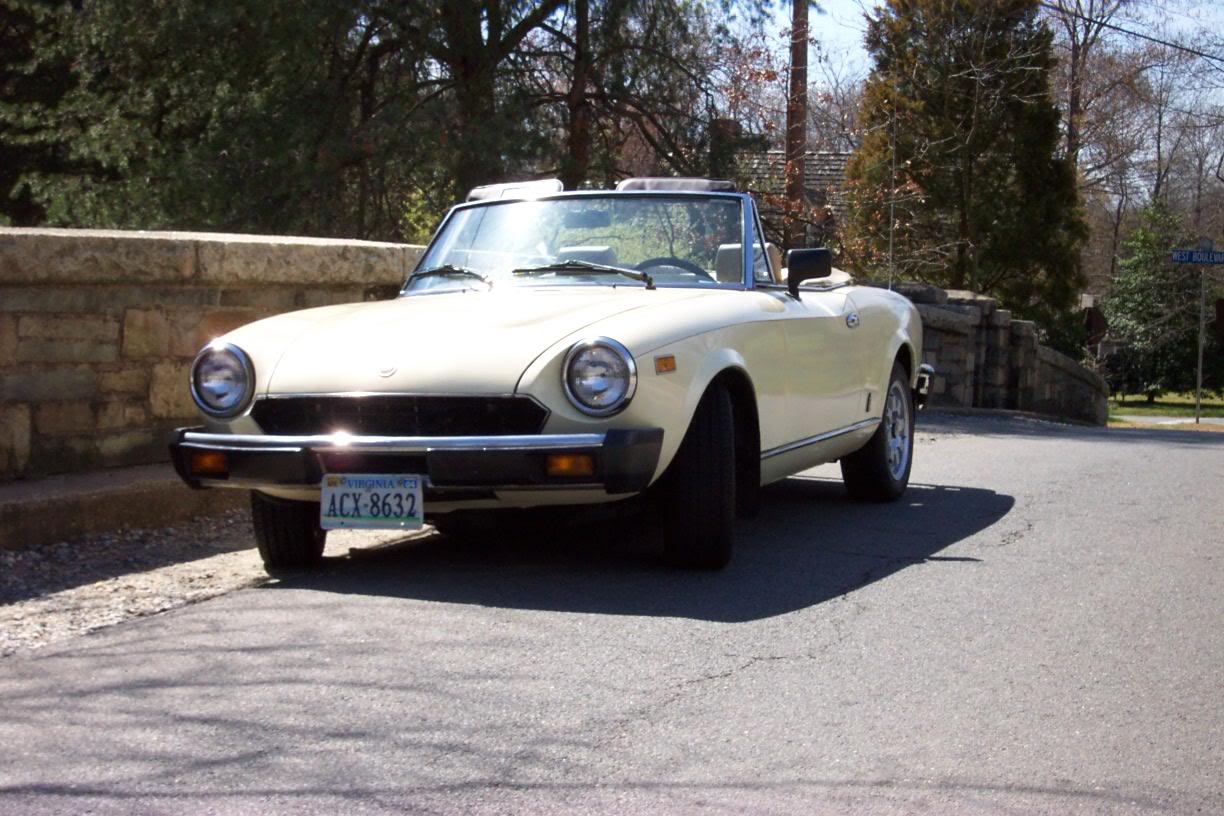 I was a was a " caller"  on the NRP show " car talk"  a few years back.  It was an interesting experience, but the show is not what it appears to be.


As I noted in my blog entries, Diagnosing Car Electrical Problems, and my companion articles on Mysterious Electrical Gremlins and Understanding the Check Engine Light, electricity can sometimes appear to do weird, almost magical things at times.  But in the end the "mysterious problem" ends up having very pedestrian causes.

I had a problem like that with my old Fiat.  I had taken it in to get it painted, and when I got it back, whenever I hit the brakes, the engine shut off.  It was almost comical.

I traced all the wiring and it turns out the fuel pump, which was mounted amidships, grounded on a long brown wire (sound familiar?) to a mounting bolt on one taillight.

The body man didn't tighten the taillight very well, so when you put on the brakes, the voltage across the fuel pump dropped to nearly zero, shutting it off.

Electricity does weird things, sometimes.  But it was easy to fix, once I traced all the wires.

I ended up as a "caller" on Car Talk with the Fiat problem, and the experience, was to say the least, interesting.

I e-mailed them with the story, and the producer called me back, all excited. After all, a Fiat - the humor potential there was pretty high - in theory at least.

"Haw, Haw, Haw!" as "Click and Clack" like to say.   Actually, if you listen to their show carefully, they say little else.

Anyway, at the appointed time, I called in (or they called me).  They do the taping at a predetermined time in the studio, at least a week in advance of the air date.  So they get the questioners on the line and talk to them in order, tape the whole thing and edit it - heavily - before air time.  The questioners are pre-screened, having submitted their questions by e-mail or phone to the program weeks in advance of the taping.   So it is not the "spontaneous" call-in show it pretends to be.  If it was, it would be boring as heck, I'm afraid.

The Fiat in question was a rust-free 1981 model. By 1980, Fiat had put the Bosch Luft J-tronic fuel injection system in the car (the same as in the Rabbit of that vintage) and bumped displacement to 2000 cc.  With dual overhead cams, the engine made good horsepower for its time. 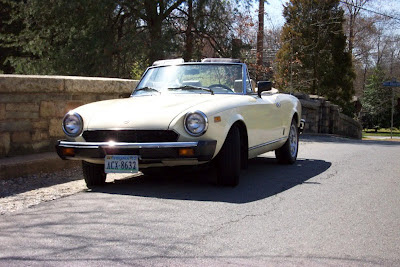 
They put in fender liners and rust-proofing, Hartz cloth tops, and other upgrades. To go after a more upscale market (the Japanese had largely taken over the lower end at that time) they put in leather interiors and other upscale trim, along with alloy wheels, etc. 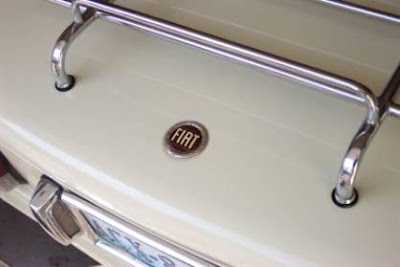 The car sold new for over $11,000 back then, which is a staggering amount of money back then - enough to buy a loaded Cadillac.


In contrast, the most popular year for that car was around 1975, when they were cheaply appointed in vinyl (with vinyl, not cloth, tops) and tended to rust when you looked at them.

In the final years, 1983-85, Fiat sold the rights to Pinninfarina, the body maker, and they were sold in the US as "Pinninfarina Spiders" with A/C and power windows.  But of course, by then, it was too late, sales were down, and the cost of meeting new pollution control certification, as well as side-impact requirements, would have been prohibitive.

Nevertheless, a 15-year production run is nothing to sneeze at for any car, particularly one built largely for export.

Anyway, Click and Clack obviously had the 1975 model in mind when I got on the phone.  Apparently one of them owned a 1979 model (ugh!) that was a victim of the Boston Tin Worm (rust).  The conversation went something like this:

Me: "Not really. Anyway the reason I called is..."

I went on to describe the problem. They listened attentively and then...

Click:  "I'll bet all that rust has really messed up the wiring on that car! You might want to check that out!"

I went on to explain that I found out what the problem was, but they cut me off.

It was not as funny a bit as they thought it would be. I was not some clueless liberal NPR tote-bag toter who drove a battered Subaru and wanted to know why it made a funny noise after the timing belt broke. There's humor gold in clueless Volvo and Subaru drivers, to be sure.

The next week, I listened for the show to come on. When the time came to my segment, it was interesting to see that they edited out nearly everything I said, other than the statement of the problem. They also added some bits, and then dubbed in my response as the same "Yea..." they had clipped from my first response.

So the resulting tape was me saying "Yea..." about five times to everything they said, including the answer to the question "I bet it has a lot of rust, right?"   Look at the pictures above, do you see a lot of rust?

Very interesting!  They took a conversation and edited it for content and humor.

So no, it was not a real conversation, of course. And of course, they are not really interested in diagnosing real car problems - that would be boring, difficult, messy, and of course create nightmare liability problems for NPR.

The show is entertainment, like most media today, not informative. And most media people think that technical details will "scare off" an audience, even on NPR, where the writing is at 8th grade level, as opposed to 6th on Fox.

And you could imagine if Click and Clack actually did give advice, how it could all go horribly wrong:

Caller:  "Anyway, the car keeps losing brake fluid, what should I do?"

Click:  "Just pour more in and don't worry about it!"

Ouch.  That would be a disaster! (If your car is losing brake fluid, stop driving it at once, imminent brake failure is about to occur).

It would be interesting to listen to a real "car talk" program, with real talk about cars and detailed technical information, but I suspect that it would have an audience of about six people.  People are so stupid today - ignorant and proud of their ignorance - as if learning actual data was the sign of being lower class.  So don't tell them anything - they don't want to know and would rather not know.

Ignorance is bliss - they say.  But in reality it is stupidity, poverty, and a raw deal.  The less you know about any topic, the more poorly you will fare in life.  Being afraid of knowledge is idiotic on its face.  But today, we have an army of people in this country who believe that ignorance is strength and that knowledge is somewhat suspect or "elitist".  Go Figure.

Even these "reality" shows like the chopper show and the hot rod show on cable have devolved into less and less about the cars (or bikes) and technology, and more and more into pissy little arguments the characters get into, throwing wrenches and shouting at each other.

It is a sad comment on human nature and our society, but most people want juicy gossip and scripted cat fights, like on reality TV - or inane jokes like on "car talk".

But you don't get a lot of real hard technical data, which I suppose is to be expected. People might be interested in more technical stuff, if you gave them a chance - and didn't dumb it down so much.  But at best, you get people like on "this old house" trying to explain things on a 3rd grade level - which is useful only to a 3rd grader.  Television has the enormous potential to be a teaching tool, but it fails constantly, because the producers and broadcasters, wanting to reach the "widest audience possible" (ratings!) want to keep it simple and dumb.  So no teaching goes on at all.

And the same is true for radio - and for "Car Talk" - they started out in the early years with real diagnosis of cars, but as car technology got more and more complex (and let's face it, those two couldn't keep up with it) and as ratings became more of a big deal, they resorted to non-car talk, like the puzzles and games and jokes they tell.  Maybe it is funny.  Maybe it is interesting.  But one thing it ain't - "Car Talk" - there is little real serious discussion about cars.

And lets face it, the advertisers (or "sponsors" as they call them on NPR) don't want people fixing their own cars, right? It would be against the interests of the advertisers. So the "tech talk" usually ends up being "take it to the dealer" as so much of the Roundel  (The BMWCCA magazine) tech section has devolved into as of late.

That is the nature of the media.... you have to cater to the sponsors.  And the sponsors do not want readers to be knowledgeable, motivated, self-actualizing, self-motivated, or independent.

They want depressed people who won't raise a finger to help themselves, who will pay money for whatever trendy latest distraction will prevent them from thinking about their own death for 10 minutes.  Stupid people who can be harvested like corn and slaughtered like sheep.

That is the nature of the media.  And it is up to you to see through this and not waste your time with the carnival ride distraction that it is.
Newer Post Older Post Home