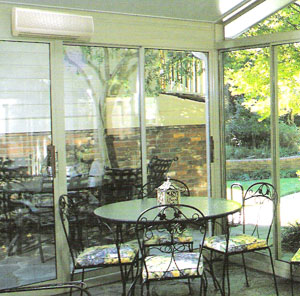 Split-system, ductless A/C units can be fairly inexpensive to install, and are useful in situations where traditional A/C units won't work.
The year was 1983, and I was a novice technician at Carrier Corporation.  I was asked to instrument a test cell to test a Japanese-made split-system air conditioner.  I was very impressed by it.  Unlike our cheap, noisy window units, this Japanese split-system had an elegance to it.  It was quiet, it was small, it was inobtrusive, and it had an infrared remote control - something that was unheard of in the U.S. market at the time.
We had an option to sell these units in the US under an exclusive contract with our company name branded on them.  A bunch of the "suits" trooped in there while I was testing it.  One of them condescendingly said to me, "Well, what do you think of it?"
I replied that it was a nicely made unit, quiet and high-tech, and it worked well.  I thought it would sell well.
One of the other suits, who was head of the window unit division cut me off.  "Americans like window air conditioners!  No one will want to buy this cheap Japanese shit!" and he stormed out.
We took a pass on the option to sell these units under our name.  And the rest, as they say, is history.  Henry Ford was offered the VW factory after World War II and turned it down.
Split system A/C units can be handy for situations where central air is not practical - for example, in a home with no force-air furnace installed, or a home with hydronic heating.  They are more efficient than window units and not nearly as unsightly.  And since each covers usually one room, they are in effect a zoned A/C unit.
Most are also heat pumps, which means they can also be used for spot heating on chilly days, for example, to warm your bedroom while you have your morning coffee - without warming the whole house.
I own four of these at the present time (until the house sells in one month).  One was a larger Mitsubishi "Mr. Slim" model installed by the previous owner.  This is an older unit which runs on 220V and cools the kitchen and living room.  It works well and has a wired remote thermostat.
The other three are grey-market Hitachi units I bought from compact appliance for an astoundingly small sum ($400 apiece, as I recall).  Do not expect prices like that.  They are programmed in centigrade.  From what I understand, Hitachi did not import these legally in the US.  However, they look a lot like some of Mr. Slim and other brands, so I wonder if perhaps it is merely a matter of branding.
Installing one is not hard to do.  You need to drill one to three holes in the house for the refrigerant pressure line, suction line, and water condensate line.  You will have to have electrical service to the outside unit, which in turn usually feeds the inside unit, although some have separate power to each unit.
I used a concrete drill for the units below grade.  Drilling the hole(s) was the hardest part.  Mounting the unit inside is like hanging a picture.  A backing plate is screwed into the wall (there are multiple holes, so it is easy to find a stud) with multiple screws.  The indoor unit (evaporator) hangs on this plate.  Feeding the refrigerant, electrical and condensate lines through the wall is a little tricky - it is a compactly designed unit.  Make sure the condensate line drains downward - it helps if your hole through the wall angles downward.
For the outside unit, you will need some kind of platform for the unit to sit on.  A pre-cast concrete slab works, although these can shift with frost.  I poured a foundation for one, using 10 bags of cement (!!) which was a bit of overkill.  For the other two, I made a small "deck" out of scrap deck lumber and then mounted the outdoor (condenser) units there.  There are also brackets you can buy to mount these on a wall (for 2nd story applications and the like) so that they stick straight out of the house.
Some units come with "pre-charged" lines that you can connect and the system will work right away.  Other units come pre-charged with refrigerant, so all you need to do is "pump down" the lines and then open the valves.  I had a local HVAC tech come out and pump down the systems and charge them, which they did for about $100 a unit.
The units work well and have worked flawlessly since then.  They are a good option for houses like mine, that have hydronic heat and no ductwork.  They also work well for historic structures, where you don't want to run ductwork or otherwise alter the structure.  They work well for remodeling and additions, where the existing HVAC plant won't handle the extra load.
In the photo above, a Mr. Slim is shown heating/cooling a glass sun room.  While such a system might provide a little heat on a cool day, and might cool down such a room slightly, I think it would be disingenuous to suggest that these units could pull down the massive load that a sun room incurs.  But it was a readily available photo from the Internet.
All in all, I highly recommend these units.  They sell them retail at HEP.  I would not suggest tackling the installation yourself without some HVAC experience.  Some retailer air conditioning places mark these up heavily - for the cost of installation.  Running the electrical wiring and drilling holes in the walls can get expensive.  But many places, I think, pad the prices considerably.  Shop around on price - many places mark them up considerably.
Newer Post Older Post Home