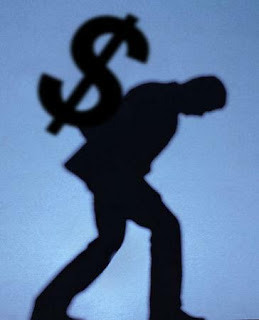 One of the heartbreaking aspects of the recent recession has been the rise in debt-reduction scams.

Debt reduction scams - what are they?  It is hard to get good information online.  The FTC website only obliquely talks about their characteristics.  Many other sites are mere cheer-leading sites (spamming, grooming, etc.) for them.  For example, the previous link to a "Hub Page", while informative, implies that "debt reduction" can be a good thing for people "in the right mindset" - and it was responded to with lots of gushing accolades, such as "well, I guess it pays to find the right company for debt reduction!"  And of course, many of the responses are along the lines of "Yea, most of those companies are SCAMS, but click HERE to see one that isn't!"

What is the scam and how does it work?  And does it reduce debt?  The answer to the second one is usually "NO" - you end up owing more money than before, and oftentimes end up in Bankruptcy court.  If your debts are that onerous, just cut to the chase and call a real Bankruptcy Attorney. A real one.

1.  You call the agency, after seeing an ad on a lamp post, on an online ad, pop-up, or a carefully placed "article" in a blog or newsgroup.

4.  They claim that your credit rating will not be harmed, or if it is, the harm will disappear once the "process" has been completed.

5.  They ask for an up-front fee of 3-5% of your debt balance and then ask that you make minimum payments to them to "hold in escrow" for you.

Is this legal?  Not really.  Is this some sort of normal process?  Not really - the idea that you can stop paying your bills and then use this as "leverage" with the credit card companies is really a made-up concept, not some known legal path, such as Bankruptcy.

And therein lies the first problem.  Once you stop paying your bills, the normal legal procedures do kick in.   Unlike real legal processes such as Bankruptcy, these schemes do not halt or suspect collection efforts.  The creditors will report you late on your credit reports, basically killing your credit score.  Next, you will get angry letters, phone calls, etc. from your creditors.  Finally, they will take you to court to get a Judgment for the debt owed, which completely tanks your credit score.  Then, they sell off this bad debt to low-life debt collectors, who will call you constantly and harass you for the money.

If you really wanted to go that route, you could just as well have saved the 3-5% fee and just been a deadbeat for free, then try to negotiate your debts with the debt collectors.

(A minor note on this:  If you do have a legitimate debt that has gone to collection, and a debt collector contacts you, make sure you (a) get a copy of the debt obligation in writing, (b) make sure the debt is legitimate and not made-up, and (c) get a written release from that debt in response to your payment.  Believe it or not, people pay off debts they never incurred, in response to debt-collection calls or letters!  And believe it or not, some folks end up paying off the same debt multiple times, because they don't get a receipt for the debt payment!)

The creditors are not obligated to contact any "debt reduction agency" instead of you, and in fact, they probably can't even talk to them, without some explicit approval from you, under the law.  And in fact, they probably won't talk to them, as they don't have to, under the law.  The fantasy the credit reduction agencies sell is that they are some sort of quasi-legal entity (many have names with "Law" in them, or imply they are attorneys, or have one hapless "sap" attorney on staff) but it simply isn't true in most cases.  And unless you are in Bankruptcy, they are not obligated to talk to your "legal" representative, even if they were one.

And in many cases, the "debt reduction agency" does absolutely nothing on your behalf.  You see, once you gave them the up-front fee, why should they bother doing ANYTHING for you?  Like with the Invention Brokers, once you paid the up-front fee, they are basically done with you.  They need not do much more, as they have already "earned" their fee.  It is another example of one of those "best efforts" contracts, which obligate them to do little or nothing, in return for your money.

And please note, don't fall for the scam that the up front fee is "refundable" if they don't get your debt reduced.   Once you pay that money, you cannot get it back without legal action.  A "money-back guarantee" is only as good as the person making it.  If you have to sue to get your money back, chances are, you won't get it back.  If they really were operating on a commission, they wouldn't ask for the money until it was earned.  And please, don't be so ignorant as to believe their promises of putting the money "in escrow".

And like the Invention Brokers, they close their doors and reopen under a new name, in short order, leaving behind a trail of broken clients in their wake.  So even if you could sue them, chances are, they will be no where to be found.

Why can't anyone stop this?  Well, as the first link above illustrates, the FTC has tried.  But like with the Invention Brokers, they can only stop the more obvious ones.  They get back some money (for 7,000 clients, a drop in the bucket) but even then, only pennies on the dollar.  And often these actions by the FTC only serve to eliminate competition from the marketplace, allowing the more established folks to get more market share.  So in effect, they do worse than nothing, they actually help the con artists.

And the FTC's warnings about these scams are so obliquely worded and hard to find that they are pretty worthless.  The folks who fall for these scams are not very bright people - they don't read much, other than the cardboard sign on the lamp post that says "Get Out Of Debt Now!"  And they call the number and are persuaded by clever telemarketers to get into this scam.  Such folks don't read the FTC website (even if you could navigate it) and such folks likely wouldn't even read this posting.  So they are sheep to the slaughter, basically.

These are the type of people who got into debt through dubious payday loans, rent-to-own furniture, "buy here, pay here" used cars, title pawn loans, rent-to-own bling rims, and of course, the worst sort of credit card offers.  Debt reduction scams are just the next step in a long line of raw deals they are signing up for.  Misery breeding misery.  It is very sad.

And because the clients are all broke, it is a perfect scam - the broke clients don't have the money to hire a lawyer to go after them.  In a way it is sick perfection!

The common thread with this scam, as well as the Invention Brokers, the "Great Wall of Sound" or any number of other scams is simple:  The up-front fee.  These companies promise to do amazing things - make you a millionaire with your Patent, or make you a pop singer with a hit record , or cut your credit card debt in half.  All of this, if you pay them a fee, up front.  Where people get the money, I don't know.  But they get it.  And they pay - and pay, and pay.  And their lives are miserable as a result.

Once you have paid that money, you realistically can't get it back.  As I noted in another posting, any amount of money less than $10,000 is not worth suing over, so if you give someone that kind of dough, and they don't perform, well, it's gone, period.  These are best efforts contracts, where the company is only obligated to use their "best efforts" to do whatever it is they promised to do.  So in many cases, even if you can sue them, guess what?  You don't have a case.

But what about Attorneys?  A genuine bankruptcy attorney will ask for money up-front, too, right?  Yes, this is true, but an Attorney is licensed by the State he practices in.  All it takes to make his life miserable is to file an ethics complaint with the State Bar where he practices.   It costs you nothing.  Just answering the complaint will cost him thousands of dollars and hours of his time.  If he starts getting 10, 20, 100 complaints, well, he is not going to be an Attorney for long!

Similarly, a LICENSED contractor may ask for a down payment on a roofing job, but never for the full amount.  And if he doesn't complete the job, you can file a complaint with the State licensing agency, and he can lose his license.  The unlicensed guy, on the other hand, who blows into town right after the last Hurricane, he'll take your money and then just leave.  He has no credential you can go after.

And that makes all the difference in the world.  If you really are behind the 8-ball on your bills, think about where you want to go with this.  First off, contact your creditors and see if you can work out a payment plan.  Next, contact a legitimate credit counseling agency - one that will help you negotiate a payment plan, not promise to wipe out your debts.  Such agencies may ask for a SMALL fee (less than $100) for counseling, but not a percentage of what is owed.

Finally, talk to a REAL Bankruptcy Attorney.  If you really owe more than you can ever possibly pay back, then Chapter 13 Bankruptcy may be in order.  It may discharge part of your debts (the interest parts, anyway) and work out a payment plan for the principle over time.  Yes, it will ding your credit rating, but it discharges the debt and prevents you from getting angry creditor calls for the rest of your life.  And the damage to your credit rating is probably about the same as just not paying your bills, as the "credit reduction" scam people advise.

If it sounds too good to be true, it probably is.  And if someone says you can make money without work, walk away from debts without paying, or create something-from-nothing, watch out!  Because they probably already have one hand on your wallet.
Newer Post Older Post Home