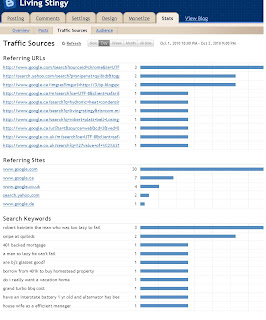 I can SEE you!  Or at least Blogger allows me to see what keywords you used to find this page.

On Blogger Draft, you can view the number of hits on a blog and also view "traffic sources" which includes keyword searches that found a particular blog page.  It is an interesting insight into the readership of any blog.

This blog does not get a lot of traffic - a few dozen hits a day.  Some entries are surprisingly popular for a while, others for all time.  And the keywords chosen to find pages can run from hilarious to sad.

The following are the "Top 10" articles on my blog from May, 2010 (when Blogger started tracking this data) until today.

Some queries are quite interesting and an insight into the mind of the reader.

For example, I get a lot of queries like "stinky old car" or "how do I get rid of car stink" on my "old car smell" posting.  Apparently, this is a problem for a lot of people with Car B.O.

On my "It's OK to be a Housewife" posting, queries range from "Is it OK to be a housewife?" which reflects the political correctness pressure on many women today, to "depressed housewife" which also reflects the lack of fulfillment many women feel in this under-appreciated but potentially important role (as noted in my blog, it is what you make of it - but most men, including husbands, marginalize it).

The housing crises has produced a number of interesting queries, as many people have searched on "401(k) pay off mortgage" and found my "Use 401(k) to pay off Mortgage?" posting.

But one sad and chilling query that turned up that hit was "commit suicide house foreclosed" which made me worry that the person searching might be in trouble.  I hope that wasn't their plan.  Granite counter-tops are not worth dying for.  Houses are just "things" and you can live a rich life without owning one - even if your credit rating is dinged.  Dear reader, if you are out there, please don't end it all over something as stupid as foreclosure.  Life does go on! (and often for the better, after foreclosure).

My posting on Quibids generates a lot of hits, and as I noted in a comment on that page, most people searching it are looking for ways to "game" the system so they can "win" an iPad for $25 like it shows in the ad.  P.T. Barnum was overly conservative in his estimates.  A new sucker is born every nanosecond.

And in case you missed the point, you can't buy an iPad for $25.  You might "win" one at one of these casino auction sites, but that is winning a contest, not buying something.  And you are far, far, more likely to lose than win.  So don't bother with that nonsense, period.

Portable Air Conditioners continue to be a big hit.  People seem to think these things will cool their whole house - in a non-vented mode to boot!  Oh, well, I guess when it comes to money OR the laws of physics, people want something-for-nothing.

Again, in case you didn't get it, it won't work.  Portable air conditioners can be useful (I have two) but only for limited circumstances.  Even the manufacturers say this - they are not leading anyone astray!

I wrote this blog mostly for my own needs - a need to write things down that I think of, as a way of organizing my thoughts.  Also, I guess, it is interesting to be able to write something and have it preserved on the Internet, perhaps for all time, or at least perhaps longer than I will live on this planet.  Or perhaps a server crash will take it all down tomorrow.

But I never seriously thought many people would read it.  But a few do, which is interesting.  I hope they get something out of it.

A friend of mine accused me of being a pompous know-it-all, a title that I gladly admit to.  Yes, I have opinions - strong ones.  And yes, I have a personality - a strong one.  I don't apologize for that, nor am I offended by anyone else having strong opinions.  In fact, I respect that, even if, as is usually the case, they are dead wrong about everything.

What I do despise, however, are people who do not have strong opinions, or, using passive-aggressive methods, try to stifle those who do.  People who say "you can't say that, because it hurts my sensitivities."  People who take their precious ego so seriously and nurse it like a hothouse flower.  People for whom life is deadly serious and their own being is the most serious thing in it.  People who can't laugh at themselves (but have no trouble ridiculing others).

The truth, however, often hurts, or at least it will if you let it.   And some of the things I have posted in this blog contain painful truths - that as a nation we all spend too much, save too little, and rely on easy answers from the first snake-oil salesman to come along.  Glenn Beck is only the first in a long line of hucksters selling the suckers what they want to hear.

And what they want to hear is that all their problems are someone Else's fault, and not their own.  But the harsh truth is that people generally are responsible for their own messes, particularly in the USA, where their is so much wealth that all you need do is work moderately hard and not blow it all on stupid crapola.  But that's kind of harsh for most people to hear.

Like I said, the truth hurts - if you let it.  If you take yourself deadly seriously.