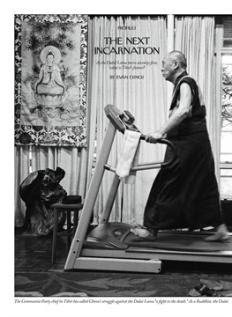 The Dalai Lama stays in shape!


Many young people think it is hip to put "free Tibet!" stickers on their car and they think the Dalai Lama is a cool laid-back Buddhist dude. But should you follow someone just because they look cool - without doing the research?  Why take on someone else's fight without understanding it first?

While Chinese Communism sucks, and the way they've treated Tibetans has been largely horrible, is the Dalai Lama some sort of salvation for Tibet?  I think not, and for a number of reasons.

1.  It Ain't Gonna Happen:  We are so in bed with the Chinese now, that the likelihood of a "Free Tibet" just isn't going to happen in our lifetime - if ever.  Like most of these nationalist movements, we've used it as a wedge issue to annoy an adversary, without any real intent of following through.  Yes, the Dalai Lama has been paid by the CIA - over a million bucks over the years, and even ran an insurgency training camp in Colorado. But like America's support for Cuban refugees and the Bay of Pigs invasion, there was never a serious intent to "overthrow" Castro - just to be an annoyance.

2.  He's a CIA Agent:  Yes, this innocent holy man has taken money from the CIA.  Penn and Teller have an excellent video on this, and not surprisingly, all the "peace and love" hippies are calling Penn and Teller horrible names, including fascist, because instead of blindly following a charismatic leader, they did some research on the issue.  How odd, hippies following a CIA plant.  But that is the nature of manipulation, and "useful idiots".

3.  He's a Homophobe:  You may recall the comments the Dalai Lama made about homosexuality - which he quickly clarified (but did not retract) when he realized that many Gays were blindly contributing to "Free Tibet" causes and also many hippies might catch on to the game. He backpedaled so fast on that one, it wasn't funny. And while "clarifying" he initial remarks, he still stuck to the same old line that the Pope uses - homosexuality is bad, period, but we should pray for the "sinners".

Many people blindly assume that a Buddhist dude wearing a sheet has to be all peace and love. But the reality is, the government of Tibet prior to the Communists, was little better than life under the Taliban. Communism sucks, but the Dalai Lama is no sweetheart, either.

And speaking of Taliban, you'd better check out Buddhism in detail before you go embracing it, if you are Gay.  Homosexuality is a No-No in the Buddhist religion.  So you might as well join the Catholic Church as become a Buddhist.  The hypocrisy factor is about the same.  Well, at least the Catholics are up front about it!

4.  He's Filthy Rich:  It is hard to put a dollar amount on his wealth, but he owns homes on several continents and is hardly starving.  Many hippies blindly assume that since he wears a sheet, he has assumed some vow of poverty.  Au Contraire.  This guy was basically the Shah of Tibet - living the life of luxury while his people starved.  But of course, they don't talk about that aspect of his life very much.

5.  Non-Violent, My Ass:  As noted in the Penn & Teller video, he was paid to run an insurgency training camp in Colorado, and not uncoincidentally, a few years later, his monks ran amok in Tibet, setting fires to buildings and causing havoc.  Doesn't sound very non-violent, does it?

6.  He's a Communist:  This blogsite claims that the Dalai Lama embraces Marxism.  I am not sure if that is indeed correct, but it conflicts with his role as the fabulously wealthy leader of Tibet.  On the other hand, there are a lot of liberal people who are millionaires who think Communism is a swell idea.  So go figure.

7.  He's a Despot:  The position of Dalai Lama is not an elected one.  He wants us to return him to power in Tibet as the unelected dictatorial leader of the country.  Again, that ain't gonna happen anytime soon.  But it begs the question - why are we supporting what would be a dictatorial theocracy in Tibet, while decrying the same type of government in Iran?   And life for the average person under the DL in Tibet was basically that of a serf.  So why are we supporting this guy again?

So where does this guy fit on the social scale?  Mother Theresa or Pol Pot?  The answer is somewhere in between.  He is more like a puppet government, such as in South Vietnam, that the US tried to support, not realizing it was as bad and corrupt as the the North Vietnamese Communists were evil.

In other words, he's no saint, but he's the enemy of our enemy, so the U.S. Government supports him.  And thanks to an extensive PR campaign, they've gotten armies of "useful idiots" to put "Free Tibet" bumper stickers on their cars.  And our government has given him awards (in addition to cash payments and CIA training contracts) over the years.  He is the darling of both the left and right.

Many hippies are startled to discover he isn't a Vegetarian.  On more than on occasion, the DL has been invited to an event and offered a Vegetarian meal (including at the White House) only to have the DL send it back. "We just assumed...."  people say.   Never assume!

And that's the problem with figures like this.  People PROJECT onto the figure what they want to believe - that he is a peaceful benign figure, fighting silently to "free" his homeland.  But in reality, he has made a business out of this "Free Tibet" nonsense - quite a lucrative one for himself.  Heck, he even has his own website!  I kid you not.  And even if he were to succeed at this impossible task, Tibet would not be "free" in the Democratic sense, but a religious theocracy.  Some freedom!

The DL is quite popular with far-right conservatives as well.  As a Commie-fighter, he has rubbed elbows with and raised money from a lot of right-wing folks, as well as the left.  He is pretty astute in looking out for himself, if you ask me.  But like most of these insurgents we sponsor (like the Mujaheddin) we don't have any real intention of supporting them long-term, but rather we just them as puppets in International cold war games.

And the parallel between the DL and the Mujaheddin goes beyond that.  Both subscribe to religious beliefs that are contrary to that of most Americans.  And both subscribe to draconian treatment of their own people and have an intolerance for much of our American lifestyle.  And both hoped to use us - and our money - to free their "homeland".

Sorry, but I don't need to "follow" or support some guy or group who is head of an alien religion that fundamentally conflicts with my beliefs, who claims to be the rightful leader of an Asian country on the other side of the planet - whether it is the Dalai Lama or the Taliban.  Same cheese in a different wrapper, as far as I am concerned.