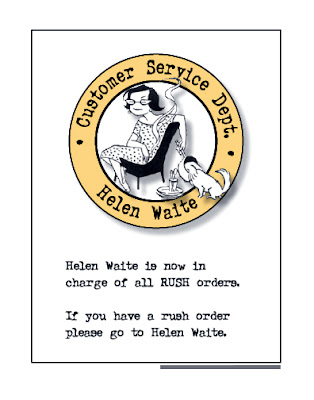 Many folks still labor under the misconception that "The Customer is Always Right."   But businesses that cater to this customer service model have either gone under, or are passing on the exorbitant costs of a few customers to the rest of us.  Most other businesses have realized that taking a pass on the 5% bad customers out there can result in a more profitable and smoother running business.

In a recent New Yorker article, James Surowiecki, talked about customer service, and as usual, he got it all wrong.  Which is not unusual, as many people and companies are getting it all wrong - increasing costs and making life more difficult for the rest of us.

In the old days, many companies, whether they be department stores, or automobile manufacturers, would go out of their way to assist customers, often employing an army of customer service people to assist their customers with complaints and concerns.  With the advent of the 1-800 toll free number, many companies found themselves staffing huge call centers, as people no longer wanted to write a letter to the company, but instead demanded immediate, instant service in response to their complaints.

And it was simple economics - once the "price" of filing a complaint went down, the number of complaints went up.  Before the 1-800 number and the Internet, a complainer had to write a letter, gather their documentation, make copies, address an envelope, and put a stamp on it (which is fairly "expensive" in terms of time and labor).  Afterwords, all one need do is dial a 10-digit number or click on a mouse.

So rather than try to figure things out on their own - or accept trivial setbacks as the norm - people started complaining more and more.  In an effort to cut these costs, many companies have moved "call centers" (the monster of their own creation) overseas to India, where people call in, but are never heard from again.  The Indian call centers can be so unhelpful that it is often not worthwhile calling them.   This effectively raises the bar on complaining again, as the serious complaint people will go back to writing letters.

But in many cases, as a business model, it makes no sense to make everyone happy.  As with any other economic or Engineering phenomenon there is a law of diminishing returns.  To make that last 5% of complaining customers happy, you need to spend more than you did to make the first 95% happy.  And this means the costs of serving that small minority of customers simply isn't worth it.

I saw this effect while on the Vonage website.  Vonage sells (or sold) an internet telephone service, which probably has been eclipsed by Skype and Magic Jack (or NetTalk) by now.  When you signed up, they shipped you out a router - or you bought one locally at Staples - and then plugged it in and plugged in your phones.  If it worked - great.  If not - well, send it all back for a full refund.

One irate customer wrote in to the Vonage discussion board about how he wanted to connect his Vonage box in an unusual but theoretically possible configuration.  And it wasn't working.  Their response was simple:  Send it all back for a full refund.  We can't help you.

And it was a smart approach.  It turns out that in some instances, connectivity problems prevent the VoIP technology from working.  You can spend hours of customer service or technician time trying to troubleshoot why this is - and still end up with a physical barrier to service.  Since they are not a regulated utility like the phone company, they are not required to provide phone service for everyone.  So instead of tilting at windmills, they just say "Sorry, it ain't gonna work".

And it is a smart customer service model - and perhaps  one that more companies should adopt.  We've all been to a restaurant, on an airplane, or at a store in the mall, where some pompous self-important person makes a big deal about getting special treatment.  The end result is the rest of us have to wait around while the blowhard is catered to.  And the extra costs in the discounts, refunds, and special treatment they request end up costing the rest of us more in terms of product or service costs.

The news was abuzz recently about a flight attendant who, fed up with a difficult passenger, pulled the exit chute and left the plane in disgust.  It was a childish thing to do, and arguably unsafe - leaving the passengers with an undermanned aircraft, stuck on the runway.  But yet many applauded his actions and cheered him on as a hero.  The reason is simple - we've all been on the airplane where everyone follows the rules, takes their seat, brings appropriate sized luggage and behaves themselves - except for one or two people who take forever storing their bags, try to steal your seat, or otherwise make a nuisance of themselves - sometimes delaying the flight.

That annoying 5% that makes life difficult for the rest of us.  And the flight attendants, trying to be "nice" often accommodate such schmucks, which is equally as annoying, as, after all, we would never dream of asking for special favors - and in most cases, they would not be granted if we did!

The "screw you" customer model improve efficiency for most, and for the 5% problem customers - it may retrain their way of thinking.  As I noted in my previous  post, Problem Clients, there are people who love to make a nuisance of themselves, and their behavior is often reinforced by scurrying customer service representatives.  If companies stopped catering to this sort of attitude, it might result in loud complaints from those customers - but accolades from the rest of us.

There is an apocryphal tale in this regard.  At a crowded airport during a holiday season, a flight is canceled.  The passengers are told to report to the service desk for re-booking on the next flight.  A pompous blowhard elbows his way to the head of the line and demands to be booked on the very next flight, upgraded to First Class, of course.  The harried gate agent explains that he will have to wait his turn, as all these other people are waiting to be re-booked as well.

Without missing a beat, she picks up the intercom and announces to the terminal, "Attention passengers, there is a person at the service desk who DOES NOT KNOW WHO HE IS.  If anyone can identify him, please report to the customer service desk."

Putting down the microphone, she says to the gentleman, firmly, "Now, get back in line!"

It is a fantasy, of course, but it spread by e-mail like wildfire, as most of us have been those poor schmucks waiting in line while some blowhard gets special treatment.  Or we've been that gate agent or other customer service person, trying to balance 500 different job responsibilities while some customer makes a nuisance of himself, claiming special privileges.

A better model is to just write-off those types of customers.  They are not profitable at all.  They demand discounts and then want a refund.  And they cost hundreds if not thousands of dollars in customer service expenses.  If you can cull that 5% from your customer base, you can serve the remaining 95% much more efficiently and effectively - and a lower price to the consumer and a higher profit margin to yourself.

We do this all the time in Engineering - we call it 'burn in'.  When a new electrical product is manufactured, you plug it in and run it for a few hours or even days, so that the "problematic" units manifest themselves and they can be culled from the production lot.  The remaining units will be more reliable and trouble-free, resulting in less cost to the company in terms of service and goodwill - and end up being a better buy for the customer.

Similarly, if you can find an effective mechanism to cull problem clients and bad customers from your customer base, you can end up with a far more efficient and enjoyable business.

And many businesses are now doing just that - which makes the chronic complainers all that much more unhappy.  Before you start screaming about some injustice you've received as a consumer, think for a moment as to whether you are making yourself one of those 5% chronic complainers.  If a particular company, product, or service does not work well for you - don't use it.  Trying to make a product or service into something it isn't is not going to be effective.

Sometimes it is best for both parties if you just walk away, if you are unhappy with a product or service. Trying to fix a bad deal is a waste of your time and theirs - and chances are, neither of you will be happy no matter what accommodations are made.