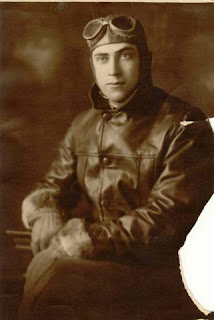 Old photos, such as this 1918 photo of my grandfather (torn from a photo album by my Mother, during one of her drunken rages) are wonderful to look at, but how long are we expected to keep this crap?  After all, your kids probably don't want it - and let's face it, relatives sort of shoved it off onto us after they didn't want it anymore...

Mementos.   You can't throw them away, can you?  And yet they take up boxes and boxes in your closet or attic.  Worse yet, your parents and relatives pawn theirs off on you, so they will be "treasured and preserved" for generations.

Uh, gee, which part of "Gay Uncle" didn't you get?  I will have no offspring, despite my best efforts.

So all this junk will go in the trash some day.  Why not now?

Baby pictures of ancestors - let's cut to to the chase here, all baby pictures look alike.  If you want to, find some clip-art picture of a baby online and say that is a photo of Great-Great-Grandmaw Huggler, and then let's just call it a day.

They pawn this shit off on you because they don't want it, and yet, they don't have the balls to throw it away.

Great Uncle Teddy's suicide note.  Gee, thanks, I really wanted to preserve that.  It would have been interesting if he came right out and said "I'm queer" but instead he wrote some rambling missive about God and Jesus and Love.  Poor bastard, suicides are cowards, for the most part.  Buck up, man!

A file folder of papers which document my Mother's efforts to get her Mother to change her will.  A little bittersweet, this one is.  You see, my Grandmother put her money in a trust, originally, so Mother would not have access to it, other than income "as needed" - with the balance would go to her grandchildren - i.e., ME.  Grandma was smarter than she looked.  She knew my Father wanted to get his hands on THAT loot!  But Dad would have none of that, and pressured Mom to get Grandma to re-write the will so she got an equal share with her estranged Brother.

I guess I am no one, then.  Now you know why I don't hang with him anymore.  It's not the money.  Hell, I've got enough to buy and sell chumps like him, now.  Just to be deemed a "no one" by your own Dad.  Yea, that hurts.  Screw him.

We had a lovely bonfire tonight.  I pulled out these old boxes of "mo mentos" and looked through them one last time - and tossed them all on the fire.  We shared a bottle of local wine, and when it was done, I threw the glasses and bottle on the fire as well.

I can't describe how great it felt.  Letting go of all that nonsense.  All that genealogy bullshit and family crapola.  You have to be yourself - who YOU are - not some shadow or mirror of your ancestors.  The Japanese worship their ancestors, I guess.  But I suspect they don't try to emulate them or "figure them out".  They just move on with life.

As many have noted, genealogy is utter bullshit.  Trying to figure out who you are, based on your parents, grandparents, great-grandparents - and then selectively mining the family lineage for the choicest bits - its just crap.  While you may inherit medical conditions from your ancestors (The Platts all had Gout and Diverticulitis, I fear) there is not much else you can glean from it.  Because the neural network that is your brain is programmed by your experiences, not theirs.  Trying to divine your existence based on the experiences of your ancestors is just an exercise in self-delusion.

For all you orphans and adoptees out there - consider how lucky you have it, sometimes.

The fire has burned out.  Four less boxes of crap to move - with no place to store it.  So much the better.  Why did I let myself become burdened with this stuff?

Mo-mentos.  They clog up your life and force you to live in the PAST.  Live in the present - live in the NOW!  Trying to re-think your life or re-live the past is futile and there is no profit in it.  What was - was.  You can't change it by thinking about it.  LEARN and move on - that is all you can do.

We still have two large boxes - each the size of a child's coffin - of mo-mentos - photos of times past and things we did.  When do we look at these?  Maybe when we move, not much else.  Being all maudlin about the past serves little purpose and clogs up your life.

Upload the photos to facebook or snapfish and then incinerate them.  The Internet will preserve them long after you are gone.  And maybe, in 1000 years, some Internet Archeologist will spelunk through the database and find your drunken photos and say "This is how they lived in the year 2010 AD (New Age -256)."

But don't expect your kids to fawn over your vacation photos from 1997 - in your lifetime.  They have lives of their own to lead.  They are not an audience for your life.

Mo-mentos are fine and all.  But when they start to take over your life to the point where you can't live it anymore, they stifle and smother.


Note:  I am sellling some of these items on eBay, such as an 1795 Bible (I ain't an idiot).  I offered the rest to anyone on a Wiggins Genealogy Website - no takers.  I asked several family members if they were interested in it.  Sad, but no one really gives a rats ass about this stuff.
And when you think about it, a photo of a deceased great-great-grandfather, without any information other than birth or death dates - how relevant is that?  We don't know how he felt or thought at the time.  And even if he were to commit quill to paper, chances are, he would not say anything of significance.  One item in the pile 'o debris was the account of an ancestor on her trip to the Caribbean circa 1870.  A more superficial and maudlin account of a journey, one could not imagine.  It was almost as if she didn't actually go, but instead read about it in a book.
If you are going to leave a record for posterity, for God's sake, SAY SOMETHING of interest!
"I never look back darling, it distracts from the NOW" - E. Mode
Newer Post Older Post Home