NEVER Leave Tags on a Car When You Sell It! 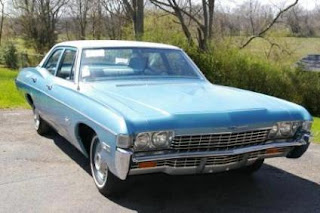 When I was 28 years old, I sold my 1968 BelAir sedan (like the one shown above) in Washington DC.  I left the tags on it, so the new owners could drive it home.  It turned into a bit of a nightmare!

NEVER leave the tags on your car when you sell it!  Back in the olden days, tags transferred with the car, and when you sold a car, you "signed over the registration" to the new owner.  But since then, times have changed, and "pink slips" (the registration) no longer conveys ownership - we do that by Title.  And registration generally stays with the owner, not the car.  And if you have active tags, you have to have insurance, as I noted in my previous posting.

But being from the country, I was used to more relaxed and trusting attitudes.  Back home, when you bought a car, most folks would let you keep the tags on it, so you could drive it home and then you could register it at your convenience.  You'd mail the tags back to the owner, or drop them off.  People were decent and trusting.  But it was still a bad idea.  If you leave your tags on the car, you may still be liable for any accidents the car gets into.  And if you had canceled your insurance in the interim, well, too bad for you.  Until the car was re-titled, it belonged to you, period.

Anyway, when I moved to Washington, DC, I took this 1968 Chevy with me.  I had no place to park it, and it was a second car.  With no air conditioning, it was not really practical for DC, and it had 130,000 miles on it and was a little rusty in spots.  It had belonged to my Grandma, and she had kept it up, having it bondo'ed and repainted.  I had done the same, and while it looked good from 20 feet, it was no collector's item, to be sure.  In 1987, it was just a 19-year-old car, not very collectible, six cylinder, 2-speed automatic, pillared four-door Bel Air sedan in teal blue.  It looked like the car pictured above.

So I put an ad in the paper to sell it.  I asked $1000 for it, with no takers after several weeks.  I finally lowered the price to $500 and I got a call on it.  A fellow in the Navy, stationed at Bethesda Naval Hospital, wanted to buy it.  I arranged to meet him after work, before I went to law school at night.  I drove the car to Foggy Bottom and waited for him by the Metro.

He and his buddy looked the car over, and we drove it around the block.  He said it was fine and handed me five $100 bills.  I signed over the title.  Then he asked if he could leave the tags on it so he could drive it back to Bethesda.  I was in a quandary.  I had to get to class, and I couldn't drive him back to Bethesda and then take the Metro back to school.  He seemed like a trustworthy guy, being in the military and all, so I said, "Sure, why not?" and gave him the keys and he took off.

The next day, I called my insurance company and canceled the insurance and then forgot all about the car for a month or so.

About a month later, I started getting parking tickets in the mail from Bethesda.  Judging by the dates and locations, these guys not only kept the tags on the car, but drove it all over the place, parking wherever they felt like.  I was panicked!

I called my insurance company, the DMV, and even the State Police.  None were very sympathetic.  When I told them I left the plates on the car when I sold it, they said "You did WHAT???"  In other words, I was an idiot.  As the State Policeman explained to me, and as the DMV rep confirmed, since the buyer never titled or registered the car, technically it still belonged to me.  And thus, I was still liable for any accidents that the new "owners" got into.

All I knew about the owners was that they were stationed at the Bethesda Naval Hospital.  And several of the tickets were from there.  I hadn't even written down their name or phone number.  I couldn't even remember what they looked like!  I called the hospital in a panic, explaining my situation to anyone who would listen.  Finally, an operator transferred me to the security department.  The security officer who answered the phone listened politely for a few minutes and then tried to cut me off - after all, this was not his problem.  You park in a loading zone, you get a ticket, plain and simple!

But I begged him for help, and before he hung up, he said, "Wait a minute, what kind of car did you say it was?"  A blue, 1968 Chevy Bel Air with mag wheels, I replied.

"Oh, THAT THING!" he replied.  Apparently my Bel Air was infamous around the hospital.

"Yea, I sold it to two young Navy guys who work there," I said.

"Well, they're here, all right," he replied, "but they don't work here, they're patients.  Mental patients."

I nearly fell over.  I wasn't sure whether to laugh or cry.  Apparently these two somehow got a day pass and decided to do a "one flew over the cuckoo's nest" kind of deal, buy this car and then go out and have a grand old time - until they were caught.

"Tell you what I'll do" the security guard said, "If you can come up herein the next couple of hours, I'll take the tags off this thing and give them to you.  But if you come later than that, I won't be here, and I don't want to deal with this tomorrow.  So come get the tags now, or forget about it!"

So I jumped in my car and drove through rush-hour traffic to Bethesda.  I got there in an hour flat.  I drove to the security center and there was a grizzled old guard there.  I explained the previous phone call to him, and he said, "Oh, yea, I heard about YOU!" and made a phone call.  I waited what seemed like forever, but was probably only 15 minutes.  Another, older security guard drove up in a Cushman cart and got out and handed me the tags, saying, "Don't ever do that again.  You don't know what sort of troubles we went through with that car!"

I thanked him and assured him that I would never do anything that stupid again.  To this day, I am not sure exactly what happened during those four weeks the car was under my name and being driven around by mental patients.  But it must have been something to make such an impression on the security guards.

As for the car, I never saw it again, and it probably went to a junkyard shortly after that - I am not sure.  I often wonder, some nights, if I could have gone back, found the hide-a-key, or hot-wired it, and simply driven it away.  After all, they never titled the car, so it technically still was in my name.  It would have served them right!  But that wouldn't have been right, either.  Sometimes it is best to just let go of things.

Anyway, it was a valuable lesson - and a painful one as well.  And it could have been far worse, too!  Suppose they had hit someone with the car - or run someone over!  I might have been liable for any injuries or death.  Of course, at the time, my net worth was negative, so it probably wouldn't have made much difference.  As for the parking tickets, I don't recall how that panned out.  I think the guy at the Bethesda Naval Hospital security center canceled these when I told him what the story was.  And perhaps with the tags off the car, he could have it towed as "abandoned".   I  don't recall having to pay them, and perhaps I was lucky there as well.  It could have been far worse - thousands of dollars in parking fines and no way to avoid paying them.

Little lessons like this in life are painful and expensive.  But it is how we learn.  I like to be a trusting individual, but in today's world, you can't be that naive and trusting.  And if your net worth is anything, you can't afford the liability of "leaving the tags on" a car so a buyer can drive it home.  If they run over a small child on the way home, YOU are liable.  Being nice can be very expensive!

I can look back and laugh at the experience now.  It was memorable!  And I hope you remember it, too!

And yes, even today, people ask me, when buying a car, whether I can "leave the tags on it" so they can drive it home.  And after I tell them this story, they say, "Sorry I asked!"

NEVER leave the tags on a car when you sell it!  PERIOD!
Newer Post Older Post Home