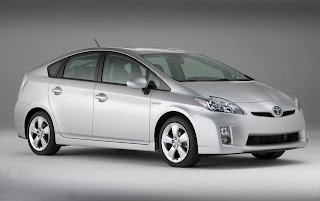 A lot of ink has been spilled lately about " hyper-miler"  cars such as hybrids, that get 40-50 mpg.  But what people forget, is that such cars existed, nearly 30 years go, routinely getting over 50 mpg, at a very low cost.  The simple formula?  Small car, small engine.
50 mpg.  It is a fabled number.  The Prius people bandy it about like it was some impossible goal to reach, that is only attainable with exotic hybrid powerplants using rare-earth mineral battery packs.

Yet during one of our previous gas crises (and there have been, what, like four of them now?) automakers had no trouble selling cars that got 40 or even 50 mpg.  Granted, these were not luxurious or roomy cars, nor were they speedy or comfortable.  But they got you to work and back without a lot of fuss - or a lot of fuel. 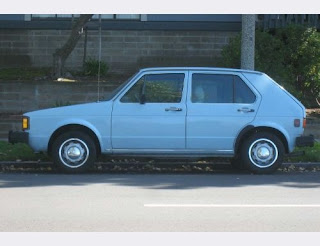 These cars were once so common on American streets that not a day would go by you would not see easily a dozen of them.  Today, they are a rare sight!
The Volkswagen Rabbit (named Golf in Europe) was the front-wheel drive successor to the Beetle and sold like hotcakes in America.  Not many survive today, as these were fairly inexpensive economy cars, and unlike the Beetle, not loved for their styling.  Boxy and plain, they were cars with a mission - Point A to Point B.  The diesel version of these cars offered highway gas mileage of 52 mpg or more.

Slow?  You betcha!  But in an era of dollar-a-gallon gas, it seemed like a trade-off worth having.  Many people kept these cars for years and years (usually being called kooks as a result).  Today, not many soldier on.  But at one time, these little square boxes ruled the road in America.

How did the Rabbit get such high gas mileage?  Simple formula - small, lightweight chassis (2,000 lbs or less), high (tall) gearing, and a small, economical diesel engine.  Not much science to it, it turns out.

These were offered in 2, and 4 door models and also as an ersatz "pickup truck" model. 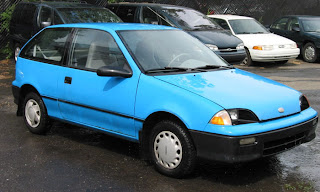 The Geo Metro was made by Suzuki (the Swift), which was affiliated with GM to some degree.  GM rebadged this car and sold it under the GEO nameplate (a catch-all nameplate for foreign made cars from Suzuki and Izuzu, among others).  The car was cheap and tinny, but its tiny lightweight body, aerodynamic design, and tiny three-cylinder gas engine delivered over 51 mpg in some trim.  Even without resorting to diesel power, the car broke the mythical 50 mpg barrier.

As an inexpensive car, these tended not to hang around for long.  Cheap cars are not collected or saved, merely because often the cost of repairing them exceeds the book value.  And since they are worth nearly nothing, most are driven into the ground.

These were offered in 2 and 4-door models and even a sporty convertible.  But for the most part, driving a Geo marked you as poor, a dork, or both. 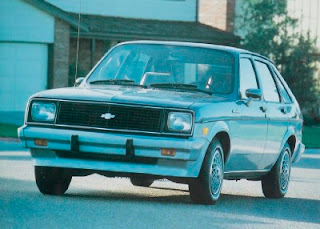 The Chevette was a fairly heavy, cramped, antiquated design.  When fitted with the 1.8 liter Isuzu diesel and a 5-speed manual, it could achieve an astounding 55 mpg on the highway.
Chevrolet, using its association with Isuzu, fitted the Chevette with an Isuzu diesel engine to achieve 55 mpg highway mileage.  This sort of vehicle, probably sold at a loss, allowed GM to meet Corporate Average Fuel Economy (CAFE) ratings, allowing them to sell larger "gas guzzler" cars alongside it.

While never a popular car, the Chevette was more solidly built that the predecessor Vega, and they did not tend to rust very much, even in snow country.  Again, like most economy cars, the Chevette tended to die off and be junked, as the repair costs would easily exceed the resale value in short order.  And as they became very cheap secondhand cars, they tended to be driven into the ground.  Again, back in the day, these were as common as dirt, but are rarely sighted today.

The chassis design, originally sold in Brazil, was basically a scaled-down full-sized chevy, complete with dual control arm independent front suspension (with coil springs), and rear-wheel drive with a live axle.  As a result, interior space was cramped, due to the large transmission hump.  Compared to the front wheel drive cars of the era, it was not very roomy.

I had one of these in college, and all I can say it that it made the best pizza delivery vehicle imaginable.  It would burn maybe 2-3 dollars worth of diesel fuel a night - without ever shutting the engine off.  And yes, it would run on fryer oil in a pinch.

* * * *
So, what happened to the hyper-miler cars of the 1980's?  Why did we see 50 mpg on the showroom floor, only to have it disappear for nearly three decades?  The answer is complex and varied.

Crash requirements were one big cause of the demise of the econo-box.  Air bags, side impact requirments, offset crash tests, and the National Institute for Highway Safety have made crash survival a big selling point - and a legal requirement - for most new vehicles.  1800-pound cars are never going to meet these requirements, and in this age of monster SUVs literally be crushed.  Today, even "small" cars tend to tip the scales at 3,000 lbs or more - 50% more than the tiny hyper-milers of days gone by.

Cheap Gas was another killer.  During the Reagan years and into the Clinton administration, the price of gas dropped steadily, until one day, it was 87 cents a gallon in the 1990's in parts of the South.  Why did gas go so low?  In part because people did buy smaller cars which used less fuel.  Lower demand equals lower prices - basic economics.  But when gas went below a dollar-a-gallon (which would be like 40 cents a gallon in 1980 terms) suddenly getting 50 mpg didn't seem like such a big deal - and having four wheel drive did.  The pickup truck and off-road vehicle booms started, followed by the "SUV" craze that is still with us today, albeit in shrunken form.

Status was another issue.  Back in the day, small cars were sold on price, and if you drove a small car, you were viewed as poor, a kook, or both.  So there was no status in driving a Chevette or a Geo.  A Rabbit GTI might be somewhat sporty, but still viewed as an inexpensive car.  Today, cars like the Prius have solved the status problem by selling small as politically correct (creating a new type of status).  And BMW has had good luck with its Mini line (selling small cars as quality items, not disposable commodities).

Will the econoboxes of yore ever return?  Perhaps not in the form we were used to.  VW has brought back the "Rabbit" name and has a diesel in it which can return 49 mpg on the highway - close to the fabled 50 mpg of the old car (note:  The EPA has revised its testing procedures since the 1980's and many mileage ratings today are lower as a result, which may explain the difference).

I suspect that most manufacturers are playing it safe, and keeping high-mileage versions of existing cars on the drawing boards, in case $5-a-gallon gas comes back, or if the EPA CAFE requirements are raised again.  Dropping smaller engines into cars, reprogramming engine controls, and raising final drive gear ratios can quickly take a car from "average" to "high" gas mileage ranges, at the expense of acceleration.

But, lacking any government mandates or pricey gas, consumers seem to prefer acceleration and roominess over gas mileage.  All that, of course, can change in a hurry, as we learned two years ago.