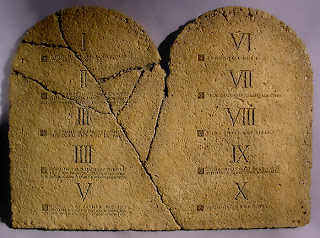 After three years of blogging about financial issues, I think I have learned a few things that can be boiled down to some general principles.

It has been a couple of years now, and our financial picture is in better shape than ever.  It took a long time to re-think things.  It takes two days and three square miles of ocean to turn around a supertanker.  But you have to start sometime.

What have I learned?  In short, how to be happier while owning less things, having more money in the bank, owing less (or no) money, and making less and working less.  In other words, what we all have to do when we retire.

Let me see if I can boil this down to one of those "list" deals, like on CNN Money.  Moses should have written for them....

1.  Debt is Bad:  Never take on debt for frivolous reasons, whether it is a jet ski, a luxury car, or just credit card debt from general spending.  Reserve debt for the critical and big-ticket items in your life:  education or your first house.  And even then, minimize debt as much as possible.  You should have a goal of being debt-free before you retire - the sooner the better.  Get debt-free and stay debt-free.  Debt is not a natural condition and it wears on your soul!

2.  Spend Nothing on Status Items and Spend Less Than You Think You Need To:  A luxury car is a fine thing, but often the same car is sold by the same manufacturer, in lesser garb at a far lower price.  Purchased lightly used, it may be half the price.  So why do people spend extra on Luxury goods?  To impress people they don't even know.  And that is stupid, period.  Over-sized houses and overpriced cars can stress your life, while providing little or nothing in return, other than fleeting status.  If you can "make do" with a smaller house, then do so - and save a lot of money in the process.  You may think you "need" a monster four-wheel-drive, but few of those vehicles go off road or are ever put into four-wheel-drive.

3. Track ALL of your Expenses, Debts, and Accounts DAILY:  With computers, you can "log in" to your credit card, bank, and investment accounts on a daily basis.  Bank accounts and Credit Card accounts should be balanced almost daily.  You should know the statement date, the payment due date, and the interest rate on ALL of you credit cards, and have a plan to pay them off!   There is no excuse for a bounced check - ever!  Your bank account along with ALL your accounts should be accurately balanced down to the penny!  You should never, ever, be doing "balance adjusts" or not knowing where the money is going.  Simple financial software allows you to track expenses and figure out a budget for everything in your life.  It takes time, but it is totally worth it!

4.  Save More:   Put money in the bank.  After the age of 30, you should not be borrowing money to buy cars.  Actually, you should never do this, as when you are young, the insurance is murder, and when you are older, you should be able to afford to pay cash.  Build up savings early and keep them up!  Fund your 401(k), but also set up other savings accounts for after-tax purchases like cars, and for emergencies, like medical illness, etc.

5.  No Expense is Too Small To Consider Cutting:  No matter how much you make, as a Middle-Class American, even smaller expenses - $5 here, $10 there, add up to a significant part of your income.  Spending $10 a day at Starbucks on coffee drinks in the morning and afternoon can add up to $3650 a year - over 3% of your annual income, if you are making $100,000 a year, and possibly 1/3 of your disposable income if, like most people in that bracket, you have only 10% discretionary spending.

6.  Get Rid of "Things" You No Longer Need:  Garage Sales, eBay,and Craigslist are great ways to get rid of clutter AND liquidate items and convert them to cash.  I have sold thousands and thousands of dollars worth of "stuff" this way over the last three years - not counting vehicle sales.  $25 here, $10 there, it adds up, over time, to a lot of dough.  Making $1000 at a garage sale is like getting a $1500 pay raise.  Money you get from selling stuff off is generally not taxable!

7.  Examiner Recurring Expenses Closely:  Subscription type items that recur every year, should be shopped regularly.  You save $100 a year on your insurance, that is $1000 in a decade.  It adds up, and even the "small" savings snowballs over time.  Cut a lot of unnecessary subscription services like "credit protector", and "virus protector" and even cable TV.  Raise deductibles on homeowners and car insurance - get rid of junk add-ons.   Convert life polices to "paid up" status.  Most Americans are horribly over-insured.

8.  Kill Your Television:  Television programs your brain to spend money.  If you stop watching this propaganda, you will stop spending.  It is that simple!  The normative cues provided by television are horrible - encouraging you to go into debt to impress others and view yourself as some put-upon victim.  You end up getting fat and sedentary, watching 4.6 hours a day of this drivel.   And no, there is nothing on there worth watching that you can't get from Netflix for $7.99 the price every month.  And no, you won't be "uninformed" by not watching Fox News.  Actually, you will be better informed!

9. Mental Health Affects Your Finances:  If you are depressed or suffering from emotional problems, chances are your finances are in a disarray.  And having finances in disarray can lead to depression and emotional problems.  Taking action in your life - taking control - is often the best way to fight depression.  Not watching Television is also a big start.  The "depression box" as I call it, causes people to be passive consumers instead of active participants in their own lives.

10.  The Best Things in Life are Free:  Your local library has books available for FREE.  The same book you paid money for at Borders, you can get at the library, for FREE.  Ditto for videos and even music. The park and public beach cost nothing, and yet most are deserted most of the time.  A lovely picnic and cocktails on a deserted beach is something that most people dream about as a "dream vacation" and pay thousands of dollars to do.  But go to your local public beach on a Tuesday, and chances are, you'll have that "deserted beach" all to yourself.  Local nature trails, bike paths, museums, and exhibits, are all free.  You don't have to spend money to have a good time.  And in fact, the less you spend, often the better time you have!


That's about it, I think.  Most of what I have posted here is a re-mix of these basic ten points.  They seem very simple and obvious at first, and yet most Americans do not follow them.  I know that I didn't.

The old me - the salary slave - came home from work "too wiped out" to do anything.  I flopped in front of the TeeVee, watched "comfort shows" and ordered a take-out pizza, which I paid for with a check that bounced, because I didn't balance my checkbook often enough.  I had lots of debt - on my house, my car, and my credit cards, and had only vague ideas on how to pay it off - often making only the minimum payments on my cards.

And yet, I saw myself as a "victim" - living "paycheck to paycheck" wondering where all the money went, and thinking that "rich people" were getting away with murder.

I never bothered to take control of my own life - my own finances - and think about creating wealth by paying down debt, saving money, and cutting unnecessary expenses (like the $89 a month Cable TV bill).  After all, the way I was living was the way everyone else lived, right?  I mean, that's the way they show everyone on television living.... whoops.

Then it dawned on me.  Television was lying to me.  The "norms" that society pushes off onto us are skewed in favor of commercial interests.  It took me a long time to figure this out - perhaps a decade or more.  But as you get older, you tend to see things differently.  Unfortunately, oftentimes you learn these lessons only when it is too late.  And you can't transfer this knowledge to others so they can avoid the same mistakes.

You can try - as I am trying to do in this blog.  But most folks, myself included, would just say "Well, that doesn't apply to me.  I make good money.  And besides, I'm doing what everyone else is doing..."