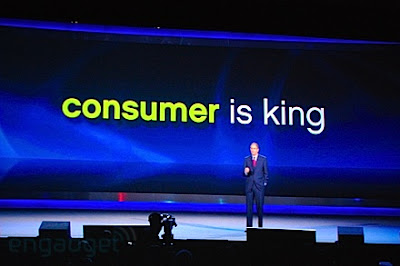 Is the consumer always king?  This slide is from a presentation given by Comcast at the Consumer Electronics Show.  Comcast.  Think about it.  Ironic, eh?  When was the last time you felt in the driver's seat when it comes to your cable company?


One of the myths our consumer society promotes is the myth of the almighty consumer.  The customer is always right, we are told, and consumers are the economic engine driving our society.  The consumer dictates to the market and the market responds.  The business that does not cater to the needs and whims of the consumer, ends up on the trash heap of history.

I blame Adam Smith for this theory - or at least the latter-day acolytes and interpreters of his works.  In his view, the "invisible hand" of the marketplace works to the best advantage - setting prices at their optimum level, with the law of supply and demand picking up the slack.

And he was right, in part.  In a well-educated and well-informed marketplace, where people are rational actors, the optimum prices for goods are set, and supply and demand are in balance.

The first problem with this model, is that it requires rational actors to make rational decisions.  And people are not rational actors, and businesses know this.  They know they can sell you an overpriced product - or sell you something you don't need or want - by telling you it makes you look younger, prettier, more handsome, slimmer, wealthier, or whatever.  They can appeal to your vanity and sell you something based entirely on emotional needs not real ones.  And in this regard, they can play you (and all of us) like a cheap violin.  This is, in essence, how all new cars are sold, for example.  No one in their right mind pays 20% over market value for a commodity.  But new car dealers make another sale every five seconds, in this country.

The second problem with this model, is that it assumes that honest and correct information is freely available to everyone in the marketplace.  People cannot be rational actors if they have irrational data to deal with.  If you can twist, distort, or even re-order data to present your product in a favorable light, you can garner more sales.  For example, in the 1980's, American Airlines was accused of monkeying with their SABRE airline reservation system (used by most travel agents at the time) to display American flights first - with flights on other airlines, even at lower fares or with more direct connections, lower down, on a second, third, or fourth page.  And allegedly, they even programmed the system to not display bargain or sale price flights from competitors.  Here, literally, is an example of intentionally bad data affecting market decisions.

But for the average consumer, bad data is a lot more complex.  Again, we can use emotions and prejudices to affect consumer behavior.  You can convince some Bozo from the sticks that "Chevies are better than Fords" and get him so riled up he will literally have a Chevy logo tattooed on his chest.  You can convince urban yuppies that a $2500 Macintosh computer is superior to a $999 Dell - and probably one of them has an Apple logo tattooed on them as well.  Things like brand loyalty or brand prejudice are idiotic - pledging your allegiance to a corporate entity that might change hands several times before the sun has set.  But people do it.

And then there are more direct ways of skewing data - though advertising, FUD, faked review sites, and the like.  You can get people to believe just about anything you want them to believe, just be generating data and getting it out there.  We call it marketing - advertising.  Selling people inferior and overpriced products - and getting them to buy.  And in any market, people buy.  People bought Edsels, right?

And the easiest thing you can get them to believe is that they, the consumer, are in the driver's seat - setting demand and steering it all.  That "hot new toy" that everyone has to have this Christmas?  You, the consumer, created the demand for it, right?

Perhaps.  But then again, perhaps not.  Long before Thanksgiving, a clever marketing pattern is established to drop stories in the media about long lines for the toy in question, or shortages in production.  Or perhaps they plant or promote an unverified story about a small riot or fistfight in a small town store, over the toy.  Pretty soon, the media takes up the slack (helped along by your timely released press releases) about the toy, and before you know it, "This year's hot must-have toy" is being shown on the morning news programs.  And of course, they pay for this, too.

Suddenly, you think you have an original thought.  "Gee, I need to get a Tickle-Me Cabbage Patch doll!" - and you might even convince yourself that it was your idea, originally.  All those other people are copying you!  And as you crowd into the store and fight over the limited supply, it never occurs to you how much you look like the cattle in the stock yards, being lead up the chute, to the abattoir.

The reality of the marketplace is that, in most instances, the consumer is not king.  The consumer is steered, directed, manipulated, cajoled, lied to, flattered, and whatever else it takes, to get them to buy whatever piece of crap they want to sell you.  And if you are a young person, age 14-35, they really have you, in most cases, as that demographic group will buy just about anything you advertise.  What you think of as your choices, or your preferences, or your likes or dislikes, are little more than your response to advertisements and your exposure to media.

Think about the music business, for example.  You may have a favorite band, artist, music style, or whatever.  And you might think that you chose these based on your personal preferences.  But the reality is, you are selecting from a limited choice presented to you via the radio, television, and other media.  You decide you like a band, because they played it on the radio.  And guess what?  Record companies paid the DJ to play it - it's called payola.

Yea, maybe today, with the Internet and all, people will actually have more of a choice in music, and small unknown groups can find a market.  Or maybe not.  Maybe you like a new singer because they were on a Reality TV show or one of those Contest shows.  Maybe it is just the same-old, same-old.

And when was the last time you felt like a king when you bought gas?  It has been a long time since they gave away free dishes or green stamps, or offered to check your oil, or give you a free car wash.  Gas price wars are a thing of the past, for the most part.  Most of us just go out and pay what we have to pay, and that's that - because we are stuck in a society that runs on gas and we all need it, to some extent, to get around.  The customer is hardly a king, but little more than a peasant.

So what's the point of all this?  Well, stop being a chump, I guess.  Stop believing that you, as the consumer, are in the driver's seat - because you aren't.  You are on a bus, and someone else is driving, most of the time.  This does not mean you have no choices at all - you can always choose what stop to get off at, for example, or choose not to ride the bus at all.  But deluding yourself that the "choices" you make in life are in fact, your own, is hardly the answer - any more than deluding yourself that you are driving the bus.

(And it goes without saying that "life" and who you are as an "individual" is defined by what brands and products you consume, is an idiotic proposition).
Newer Post Older Post Home