Expensive Gifts - Can You Afford it? 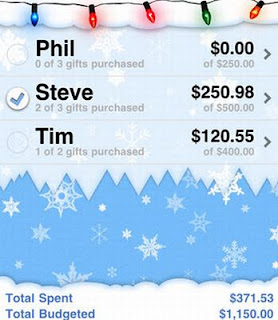 Sorry, but I didn't buy you a gift this year!  This 'app' is designed to track gift-giving and spending.  Note the normative cues embedded in it.  We are supposed to spend hundreds of dollars on gifts for people?  Who said so and why do we buy into this?

A few years back, I saw an ad on TeeVee for a "big box" electronics store (guess which one) which showed a merry, clueless woman shopper, off to do her "holiday shopping!" with her Christmas list.  On the list was a new Microwave for Mom, a Chest freezer for dad, a new TV for brother, a laptop computer for sister, a new video game console for Junior, and a DVD player for the postman!  Whee!  What fun!

The ad shocked me, as it was a very bizarre set of normative cues.  According to the ad, we should all be spending hundreds of dollars on each of our family members and friends, every holiday season, buying them things which ordinarily would be very personal purchase decisions that would be carefully thought over.  And cumulatively, this would amount to thousands of dollars spent, every year, and most likely put into the form of credit card debt.

And a lot of middle-class people buy into this, for reasons I cannot fathom.  Someone can be smart enough to draw down a $100,000-a-year salary, and yet dumb enough to spend it all because the television said so.  Go Figure!

But in a real sense, no one can afford to do this.  As I noted before, your disposable income is only a tiny fraction of your overall income.  You may be making the vaunted six-figure salary and think you are "rich" but in reality, you may only have about 1/10th of that to "spend" as you see fit.

(By the way, when I was in school, the big "dream salary" was $30,000 a year.  Times have changed since then.  Today, it is the vaunted "six-figure-income" and a lot of people make it these days - and are still broke!).

When you take away taxes, house payments, utilities, groceries, insurance, automobile expenses, plus the amount you should be putting into savings and your 401(k), the amount left over to "spend" is barely a few grand, at best.  If you are spending more than that, buying people appliances for Christmas, well, chances are, you are living beyond your means and accumulating credit card debt.

And for years, people did this, spending up their credit cards and then paying them off with a home equity loan.  And instead of becoming wealthier, they ended up becoming poorer, with a house full of small appliances and small purchases of made-in-china crap which cluttered up their garages.  And a ton of debt, to be sure.

Owning things is not real wealth.  And you are not obligated to buy people televisions and major appliances for Christmas.  Getting off the gift bandwagon is a good first step toward financial independence.

So, how do you figure out how much you can afford to give as gifts?  In the example shown above, a person has programmed their iPhone with a budget of over $1000 for three people.  Ouch.  That is a lot of money - more than I could afford!

Now, some might point out, particularly if they are aggressive about Christmas gift-giving, that one expects a similar pile of "loot" in return, from the people you are giving gifts to, so, in theory, you are not giving away things, but exchanging gifts.

The problem with this model is twofold.  First, if a quid pro quo is expected in gift-giving (and in today's competitive world, it is) then you are not really giving a gift, but merely bartering in the name of Jesus.  Second, when you barter, you often end up with things that you don't quite want, would not otherwise buy for yourself, or are not quite the right product you had in mind.

Rather than buy a television for your friend, so that they can buy you a new iPad, why don't each of you just go out and buy what you want for yourselves?  You end up with the right product (no exchanges needed) and you can forgo the pretense that you are being "generous" with someone, when in fact, you are merely bartering with each other.

And suppose you decide you don't need or want a new TeeVee, iPhone, or whatever?  Yea, you've heard that expression,  "He is so hard to shop for!" - because such people often don't want a lot of crap in their lives.  Under the system foisted upon us by the retail industry, we are obligated to accept things we may not want, and also obligated to buy items of similar value to give to others.  The net effect - if you buy into this nightmarish version of Christmas promoted by the retail industry - is that you end up consuming more than you intended.

This is not to say I am anti-gift.  Gifts should be from the heart, and should be made with no expectation of reciprocity.  Otherwise, as I noted before, it is just bartering.  And gifts can be given at any time of year, for any reason, or none.  There is no law saying "You HAVE TO give a gift in December and no other time!"  It is just idiotic to even think so - and you have to wonder why our entire Western society has fallen victim to this plain and apparent marketing trap.