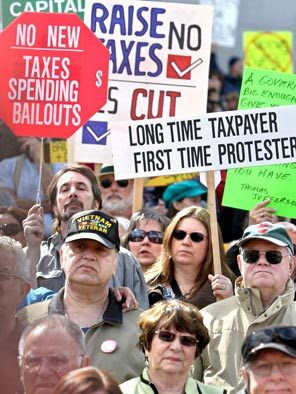 People believe what they want to believe, without thinking too hard about it.  These middle-class people actually think that Bush cut their taxes.  Idiots!
This morning on the news, a report about the failure of the so-called "super committee" to reach an agreement on budget deficit reduction.  The bad news is, they failed to reach an agreement.  The good news is, of course, that this means automatic budget cuts are going to kick in, automatically.  What was the problem again?

The sticking point was again taxes, and there is a lot of rhetoric about taxes and most of it is just utter bullshit.  People believe the weirdest stuff.


2.  Average folks will say stupid things like, "Well, a business might make $500,000 gross, and their taxes will go up!"  People have no idea how taxes work.  Income taxes are applied to net income, not gross.  Idiots!

3. Mitch McConnell, Senate Republican Whip, stated that the deal would have gone through, if only President Obama exhibited "Leadership".  "If he told us to make a deal, we would have" he says today.  Huh?  If Obama came down there and wagged his finger at you, a deal would have gone through?  But instead, he turned his back, and Congressional leadership threw spitballs and passed notes?  What is this?  Third period study hall?

4.  Republicans are already backing away from their commitment to cut the deficit, while a the same time being "deficit hawks".  They are already making noises about "unwinding" the automatic budget cuts - not surprisingly because they cut defense spending the most.  They want to cut Social Security, but not some bloated high-tech useless weapons program.  Here's a hint to all you Seniors out there - become defense contractors!

Why do people believe this shit?  BECAUSE THEY WATCH TELEVISION.  And the TeeVee tells you what you want to hear.  Hey, you can lose weight without dieting or exercising!  You can have this luxury SUV for low, low monthly payments!  And you can have all the government programs you want, AND have your taxes cut, if only they would cut out the "waste" like highways and such.

And what happens to people who get sucked into these lies?  Well, the dieter who spends $199 on the diet plan or the exercise machine ends up not losing weight, feeling even more depressed, and thus watches more television.  And before you know it, they are pulling out their credit card, yet again, to buy another "fat burner" powder or abdominal muscle exerciser.

The serial leaser spends hundreds of dollars a month on cars, and never understands why they are living "paycheck to paycheck" and never seem to get ahead.  Their debt load increases and they run out of home equity loans to pay it all off with.  And before you know it, they are facing foreclosure and blaming Obama for "screwing up the economy!"

In politics, people keep voting for odious politicians based on social issues.  Vote for Joe Patriot!  He will make sure your son isn't gay-married!  But then they find Joe Patriot soliciting an undercover officer for sex in a highway rest stop.  It sounds ridiculous, but it happens so frequently, it ain't funny.

You would think people would wise up to this sort of stuff, over time.  But human beings are raging true believers - they will go back to the hot stove, again and again, thinking, "this time, for sure, I won't get burned!"

"Ripped off in an MLM scheme?  Try our new MLM Scheme!  It is not like those other ones, honest!"

The secret to financial success and wealth is really very, very simple.  See through these sorts of lies.  Stop being a raging "true believer".  Stop supporting the very people who are trying to tear you down.  Follow your own cause and not someone Else's.
Newer Post Older Post Home