Why I Hate Starbucks 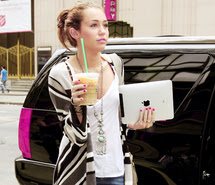 Did you ever notice how people hold their Starbucks cups?  Particularly women? Always with the elbow bent, forearm up, hand facing forward, label out?  Like they are holding a marching baton!  Note the ancillary display of Apple status item.  This bitch has it all - even the de rigeur overwrought SUV.  Am I supposed to be impressed?  It ain't working.

Starbucks sucks, lets face it.  They are emblematic of everything that is wrong with the United States of America, perhaps the world, today.  What's so bad about them?  Just about everything:

1.  They Sell Status:  People go to Starbucks so they can walk out with the logo'ed cup and announce to the world that they can afford to spend $10 on a cup of coffee.  Buying things for status reasons is one of the worst reasons to buy anything.  The entire allure of Starbucks is status - being able to say you can pay too much for coffee.  For many people, this is the allure of a Mercedes or a BMW.  They actually buy BMWs these days with automatic transmissions if you can believe that.  Sort of misses the point.  To them, it just an "expensive car" and the reason they bought it was to throw it in your face.   I hate that shit - whether it is cars or coffee.

2.  They Sell Faux Political Correctness:  Starbucks knows that their customer, in addition to being a upscale striver, wants to be politically correct and save the planet.  No Styrofoam here, folks!  Just good old honest cardboard, and "free trade" coffee.   Saving the planet, one cup at a time.  Oh, Please!

3.  They Sell Attitude:  When you go into these places, the poor slob pouring coffee is now a "barista" and a professional, and thus entitled to ridicule you in ways that your lawyer, your doctor, or your therapist would never dream of (they don't make as much).  Part of the "charm" of Starbucks is people willingly submitting to this daily humiliation and acting like it is a privilege.  Get real.  Never engage in any financial transaction where the seller makes it out like they are doing you a favor by selling to you!

4.  They Sell Bad Coffee:   When I grew up, my parents thought that Folgers Flavor Crystals were da bomb, when it came to coffee.  But a lot has happened since then, and coffee everywhere, is pretty decent these days.  Even the stuff in the coffee break room is pretty good, unless you company has succumbed to Coffee Butler or some other chain.  Starbucks seemed so good back then, because most coffee sucked.  But today, we have choices.  And Starbucks roasts tend to be over-roasted and have a burnt taste to them.  Yea, if the choice is Starbucks or crap, I'll drink Starbucks.  But if the choice is between good coffee (at a reasonable price) and burn-out overpriced Starbucks, well, it is an easy choice.

5.  They are Wildly Overpriced:  The cost of a cup of coffee at Starbucks is usually double what others are charging.  Some of the "coffee drinks" - which are little more than milkshakes - are even more expensive.  And we are expected to tip a dollar or more to someone who pours the cup.  The reason Starbucks can afford to put a store on every street corner is that the profits in selling overpriced coffee are enormous.

6.  The "Coffee Drinks" are Bad For You:  Yuppies like to go to Starbucks and sip a 1000-calorie mocha-caramel-hotte-latte drink, and kid themselves that it is "just coffee".  But coffee, while having its own faults, is only about 5 calories a cup.   Most folks leaving Starbucks are drinking candy drinks which are putting pounds on their waistlines and turning them into eventual diabetics.

7.  They are Everywhere:  People who would not dream of setting foot inside of a chain restaurant like McDonald's will gladly romp to the nearest Starbucks and drop $10 on a "coffee drink".  After all, they aren't those stupid people who eat that bad food, right?  In reality, it is just another chain restaurant - yet another example of bad American eating habits, foisted off upon the world, and sprouting up worldwide.  No wonder they all hate us.  First Coca-Cola, then Micky-D's, now Starbucks.

8.  You Can't Afford It:  Like your over-mortgaged mini-mansion or your leased car, you may think you can afford to buy Starbucks, but the numbers say otherwise.  If you buy a $5 Starbucks drink, every day at work, you will spend a whopping $1250 a year on coffee.  Doesn't sound like a lot?  Well, that probably represents more than 10% of your disposable income, even if you make over $100,000 a year.  That sort of money, invested in stocks, over 30 years at 7% would add $126,341.30 to your retirement account.  You may think you can afford this sort of nonsense.  But in reality, chances are, the cost of Starbucks is taking away from your savings or adding on to your credit card debt.

Starbucks doesn't sell coffee - they sell the idea of coffee, wrapped in a labeled logo'ed status wrapper that is designed to tell others who you are more than anything else.

Think about it for a second, how to people ordinarily hold a cup of coffee - and how do they hold a cup of Starbucks?  (we even call it by the brand name, not the generic one!)  Always with the elbow bent, the cup up at nearly eye level, label out.  Look at me!  I bought coffee!  See the photo above if you don't believe me.  Who holds any product that way?  No one.  Unless it is a status coffee drink.

What started me on this rant was that I was helping Mark balance his checkbook, after his archive copy of Quickbooks was erased.  So I had to re-enter his data from October onward.  And one little guilty secret in his checking account was a debit card charge to "Starbucks, $14.89" - and this probably didn't count the dollar he tossed in the Barista's tip jar.

WTF?  $14.89 for coffee?  Well, as it turns out, the kids where he works like to "go out for Starbucks" now and again, and he ended up picking up the tab.  He ran into the same problem in the Real Estate business - the girls like to go out for Starbucks, and before you know it, we are spending hundreds of dollars a month on their coffee.

Of course, this was not enough, but itself, to bankrupt us.  But each coffee drink was another $2.50 to $5 on our credit card, which, over time, accumulated debt and lead to troubles.  We were living beyond our means, one cup of Starbucks and one $1.99 bottled water at a time.  We cut that shit out, or so I thought.  But Mark fell back into the trap.  "What's the harm, just this once?"

Little things like that add up to big expenses, and this is the one thing I have learned in the last two years.  A lot of folks want simple answers to complex financial problems.  Isn't there some simple solution I can take to get rid of my debt?  Won't Obama pay it all off for me?  Not likely.

The secret to financial well-being is to watch "small" expenses, like paying over $1000 a year for coffee, when there are alternatives.  Yes, you won't be able to throw status in other people's faces.  And maybe your girlfriends will titter when you say you don't want to take an hour off of work to go get a Mocha Latte Caramel Frappuchino nightmare.

But then again, that's the whole deal, ain't it?  Are you willing to go bankrupt to impress people you hardly know, or worse yet, don't even like?  You'd be surprised how many folks do just that!

Note:  As I noted in my Coffee and Tea entry, a cup of coffee brewed at home costs about 22 cents.  Tea, usually less than 5 cents.   And you think paying five bucks makes sense?  It does not.
Newer Post Older Post Home