Do People Have a Right to a Job? 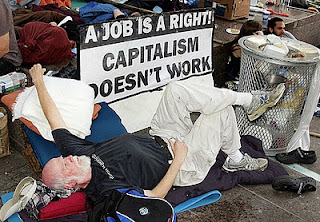 I met someone once who argued that everyone has a "right" to a job - and not surprisingly, he was chronically unemployed, until he stumbled into a cushy government sinecure.  Somehow, he managed to lose even that job - something about a urine test, I believe.

The idea that everyone has a "right" to a job is an interesting proposition.   The basic problem with it is, of course, that the point of a "job" is that someone pays you, in exchange for your labor.  If you do not work, they have no obligation to pay you.  If your skill level is not sufficient for the job, they have every right to let you go.  If you sit around and bitch all day and sabotage the assembly line, you have no right to work, unless it is GM in 1975.

And that right there is the problem with the "Right to a Job" argument.  There are people in this world who don't want to work at all (act shocked) and chances are, you've met them and even worked with them.  And such folks can be a pain in the ass to work with, as everyone else has to pick up the slack for them.

In days gone by, such folks would be fired without delay.  Today, employers have to be excruciatingly careful, to document every single infraction and follow every procedure to the letter, lest they be sued for one reason or another.  Even if you catch an employee stealing - on videotape - they will still sue you when you fire them, and yes I have seen this.  And of course, after you fire them, they collect unemployment and you pay for that as an employer, in the form of higher unemployment insurance premiums.

And that is one reason many employers today aren't hiring.  As I noted in earlier posts, hiring people is just a Royal Pain in the Ass and a money loser to boot.  And if you hire someone and they turn out to be worthless sacks of shit, it is very, very hard and time consuming to get rid of them - it will end up costing you thousands, if not tens of thousands of dollars.

We've made things this way, and then we wonder why employers move work "offshore".  We are reaping what we sow.  Wages are creeping up in China and India, and the cost of shipping is pretty staggering.  But the main thing over there is, if you don't work, you don't get paid.  We seem to have lost that, somehow.

To take this bad situation and make it even WORSE - by making a job a "right" would not solve much.  And who would enforce this "right"?  Would the government force employers to hire people?  Or, like the Soviet Union, would the government merely become the employer?

Many of the "Occupy" protesters seem to be pushing for the latter, oblivious to the utter failure of communism and the misery it brought to every country where it is practiced.  China is the only major "Communist" country left today, and given its capitalist leanings, is hardly a Marxist State.  Things got better for people in China when they embraced capitalism and renounced the excesses of Communism.

And funny thing, over the years, as our country has become more Socialist, things have gotten progressively worse.  Maybe right there is a road map for change.

What is sad, to me, is that educated people today are still falling for the same old feel-good, "why don't we just pass a law?" kind of thinking.  It seems we have not progressed very far beyond Huey Long.  Every man can be a king - or at least part of the 1%.
Newer Post Older Post Home