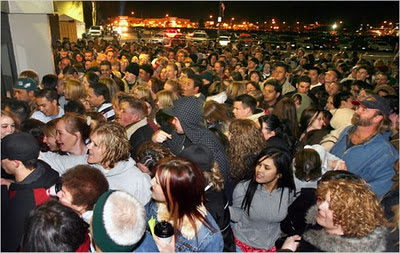 People line up for 'door buster deals'.  Is this a good way to save money - by spending it?

A couple of years back, I wrote about Black Friday and what a bunch of bullshit it was.  But the media ain't about to give up on this.  So the only thing you really can do, is give up on the media.  Unplug from the 24/7 news cycle, the blaring advertisements, and the loud commercials on radio.  And when you do hear something hyped or heavily advertised, just assume it is a load of crap and a rip-off, because it is.

Why is Black Friday such an utter load of crap, bad normative cues, and a horribly bad idea?  A number of reasons:

1.  You are being told, by the media, that this is the most important thing in the world going on, because, well, it is.   They just said it was.  Now shut up and eat your media kibble!

2.  Never mind the fact that the media is funded by selling advertisements for the retail concerns that are selling things on "Black Friday" - this is a real news story!  Funny how that works, eh?

3.  You can't "save money" by spending it, that is Q.E.D. - and yet most people fail to realize this, thinking they are "saving money" by camping out overnight to get a "bargain".  If you want to SAVE money, put it in to SAVINGS.

4.  Buying people a lot of expensive crap for Christmas is a bad idea - and the media reinforces the normative cues that spending $100 to $500 per person on your "Christmas List" is just what everyone does.  On NPR this morning, they interview a guy who is buying a television for his Mother and a laptop computer for his brother.  Huh?  Spending hundreds of dollars per family member on gifts?  This is simply not affordable for the average American.  Plus, those are sort of personal items that people just might rather choose themselves, no?  An ad on TeeVee a few years back suggested it was "normal" to buy a DVD player for the postman.  Of course, the ad was for a place selling DVD players.  And they are so cheap, why not?  (maybe because he already has one?).

5.  Consumption is not what Christmas is all about.  Talk to your Christian friends about this one.  They are so wrong about so much, but not this.

6.  Consumption is gross.  Buying someone a small appliance that they don't really need is just squandering your precious resources and leading to clutter in your friend's home.

7.  This wasn't our idea.  We have been brainwashed that we have to spend tons of money every year buying crap for people.  And for some reason, we've gone along with it.  If you look back at the history of Christmas, people exchanged small gifts that would fit in a stocking or boot.  Today, we give cars.  Something has gotten seriously out of hand!

8.  The emotional reasons for doing this are sick.  As I noted before, I've seen people "keep score" on the presents front, carefully evaluating what gift someone gave them and the gift offered in return, often with crass comments being made.  Women, in particular, seem to be caught up in this trap (and it is usually Women who try to organize "Secret Santa" gift parties at offices, which just create more stress for everyone, like we don't have enough to do all day long!).

9.  The deals often are no deals.  Yea, Wal-Mart would have a total of three flat-panel televisions offered for the low, low price of $499 one year.  Some guy gets trampled to death so that Lurleen can be the first in the trailer park to have "one of them flat-screen TeeVees!"  But the joke is, within a year or so, you can buy an even better television with LCD technology for even less.   Or you can go online and get better prices on most products.  Or, by the time you get there, unless you camp out overnight, the "deals" are gone and you end up buying stuff at regular prices.  Or, if you do get one of the "deal" items, you end up spending more than you intended, by buying other items that were not such deals.  Retailers are not idiots - they do not give products away or consistently sell for below market price.

10.  Shopping is a waste of time and money.   If  you have carefully decided that you need a particular product, the best thing to do is to research the item, find where you can get it at the best possible price (which is usually online) and then go buy it.  Buying things on impulse is never a very good idea - you end up getting not what you want or need, and paying more than you should.  Buying things for other people, without knowing their needs, particularly when they are expensive things, is an even worse idea.

Some of the Occupy protesters have called for boycotting Black Friday (I guess you'd have to, if you are occupying a park all the time, right?).  Others have called for occupying malls to make a statement about consumerism.  I am not sure the latter approach is such a swell idea.  While I may think that people who obsess about "Black Friday" are, perhaps, a little dense (if not in fact, trailer trash), I certainly don't think it is my place to stop them from being fools.  After all, I own stocks in the companies that profit from their foolishness!  Please, keep being fools!  Smoke some cigarettes while you are at it!  It puts money in my pocket!

UPDATE:  After I wrote this piece, I saw this article about shoppers pepper-spraying each other, being pepper-sprayed by security guards, fighting over electronics, and other idiotic things, mostly at Wal-Marts.  White Trash of the world - convinced it is a privilege to be allow to buy crap.  And they wonder why they are poor all the time....
Newer Post Older Post Home