More Media Lies - And How They Can Hurt You! 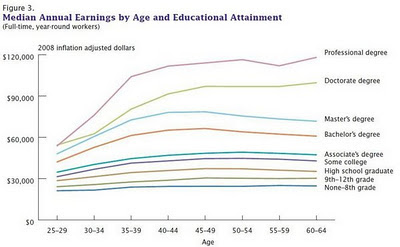 While a college education can result in higher pay - for certain degrees - it is not an automatic ticket to greater income.  Factor in the lost wages while attending college and the cost of the education itself, and the gap narrows considerably.  That is what I take away from this graph.  Others look only at the top line and report that college = money.

In this recent MSNBC piece, they make the argument that a college degree is worth a Million dollars in increased income, "on average".  On average, of course, includes people with advanced degrees, such as doctors and lawyers.  Your typical undergraduate degree is worth closer to a half-million, if that.

So college is a good deal for everyone, right?  Hold on there, tiger.  Journalists are not statisticians, nor can they even add a column of numbers.

The report fails to mention a lot of things and also skews a lot of statistics:

1.  The lifetime earnings difference does not account for the four years the blue-collar worker is working, whereas the college attendee is not working.  If you make $25,000 a year as an entry-level worker, this is a $100,000 overall that is not accounted for.

3.  The "Million Dollar" figure is an average.  Many folks with just undergraduate degrees may make little more as the result of a college degree.  Subtract the lost wages and the cost of college, and the difference narrows.

4.  Don't forget to add interest on those student loans.  If the parents put that $200,000 in college expenses into an investment fund for the child at age 18, what would it be worth at retirement?  If you plug the numbers into Moneychimp, the $200,000 invested in an undergraduate degree, put into a mutual fund earning 5% rate of return, will, by age 65 be worth $1,981,194.22 or nearly double the excess money earnings over a lifetime.

5.  Finally, not all college degrees are alike.  A degree in Engineering or Finance might be worth something.  A degree in anthropology or a B.S. in Physics is basically worthless.  Saying that ANY college degree will make you wealthy is just a lie.  Many of the "wall street protesters" are asking that their student loans be forgiven, as they listened to LIES like this article promulgates, and then are wondering why their $100,000 investment ain't paying off.

While I was a young associate at a law firm, working until 8:00 every night, the plumbers and electricians were on the golf course every day at 3:30.  And guess who made more money?  Yup.  The tradesmen.  Even for Lawyers (particularly these days) the advantage of higher education is overstated.

My advice: DO WHAT YOU LOVE TO DO - and the money will come. Going to college to make money is a waste of time - you won't make a lot more, you'll just be miserable. And going into debt for college makes no sense at all.

I love what I do, and they pay me a bit. I consider myself lucky.

Not everyone should go to college - and going based on this "study" - which is based on two thin years of data - is a bad idea.  Who funded this study, Sallie Mae?
Newer Post Older Post Home