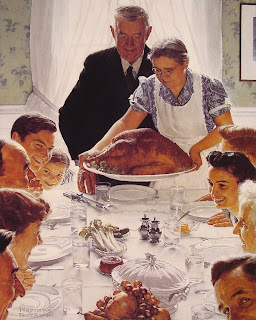 Trying to re-create a Norman Rockwell moment is often just trying to live according to someone else's normative cues.


Tomorrow is Thanksgiving, and frankly, I had forgotten it was. Weekends and Holidays mean little to you when you are self employed, which is one of the great things about being self-employed.  While the great mass of humanity is driving to the beach on the weekend, I can go on Wednesday and have no traffic and get a discounted room rate.

Of course, some folks think that is just awful!  After all, the perky hosts on the morning shows have been exchanging stuffing recipes for a week now, and stern-faced anchormen are seriously reporting about the projected "Black Friday" crowds and what the hot hard-to-get toy will be this year.

Seriously, turn that shit off.  TeeVee is just so bad for your soul.

And the worst thing about it is that it teaches you that, "Hey everybody, we're all going to do THIS now!" where THIS usually involves you spending money on crap you don't want and doing things you don't want to do.

A "Traditional Thanksgiving" can be a lot of fun, of course.  You travel to Grandma's house to visit family and friends and have a big old Tom Turkey with all the fixin's.  Well, that is the theory, anyway.

On the other hand, Grandma might well be long dead and buried, and the idea of flying 1000 miles to visit drunken relatives might seem, well, less than a swell idea.  And the idea that you have to eat the same food on the same day every year, well, it just gets old.  Once you've done this, say 40 times, you kind of have "been there, done that" - right?

In a way, it is like weddings.  30 years ago, no one was doing the "Hokey-Pokey" and I never saw those garter deals back then.  But today, we have all these traditions, plus the Macarana.  And every year, they add more.  One reason I'm against Gay Marriage is that weddings in general have become these nightmare social events - who wants to deal with that?

It is hard to break away from these types of normative cues and create ones of your own.  In fact, it is downright scary, which is why most people don't have the balls to do so.  After all, if you don't serve Turkey on Thanksgiving, what would you serve? (cue scary theremin music)  Eeek!  Your whole world might just spin out of control!  It just might!

And some people get downright offended if you fail to honor traditions.  We call those people close-minded idiots.  For example, Mark served Mexican food one year for Thanksgiving, and one guest nearly went ballistic.  Others were thankful they didn't have to eat more damn turkey and stuffing and cranberry sauce, yet again.  They got invited back.

This year, we are having Turkey sandwiches - at the request of a guest no less.  They also liked the tacos.  They are fun people.

But sitting around watching bowl games, lining up to go to the Mall, driving off to see relatives - all of that just ain't in the cards.  Why?  because I don't want to do it and I don't have to.

If you like that sort of thing, well, good for you (sitting around watching football with relatives is about the most boring thing I can think of, frankly).  But if you are doing it because you feel obligated to and you are not happy about it, well, maybe you need to re-think your priorities.