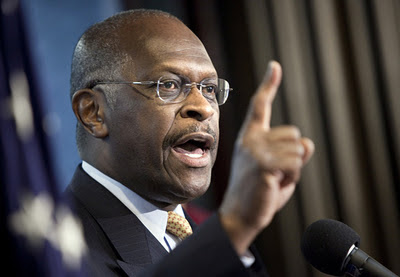 
Herman Cain made headlines the other day for flubbing a question about Libya.  Now, there is no doubt in my mind that this man is an intellectual lightweight.  After all, who in their right mind decides to enter politics by running for the White House as their first political experience?  Other than Ralph "moonbat" Nader, of course.  For those sort of folks, it is the whole enchilada (or calzone, in Cain's case) or nothing.

But all that being said, was he set-up with the question?

The question had me stymied as well:

"So, do you agree with President Obama on Libya or not?"

What an odd way to phrase a question, and if you think about it, it is a very vague and open-ended question. It is a form of passive-aggression, to be vague like that. And if a reporter wants to trip-up a candidate, asking vague questions like this is one sure way to do it!

Cain made the mistake of trying to answer the question.  I would have shot back and asked for clarification.

What kind of question is that?  "on Libya?"  What does that even mean?

Does it mean his policy of letting NATO take the lead in the air war?

Does it mean his policy on recognizing the rebels?

Does it mean his policy on kissing up to Ghadaffi in the months before the uprising?

Does it mean his policy with regard to sanctions, impounding Libyan bank accounts and assets?

And why phrase the question as "Do you agree with President Obama?"

And of course, the answer is simple.  By phrasing the question that way, they are baiting Cain into saying that he does not agree with President Obama - after all, Republicans hate everything Obama stands for, right?

So the knee-jerk answer is to say "I disagree with Obama" because you don't want to make it sound like you agree with Obama.  Because if you do, the follow-up question is sure to be...

"Well, if you agree with Obama, then why should people vote for Herman Cain?"

So the question was a set-up, and Cain stepped right into it.

Another Conservative Intellectual Lightweight - Sarah Palin - was also nailed using this vague, open-ended technique, when Charles Gibson asked her whether she "agreed with the Bush Doctrine."

I am no big fan of Sarah Palin, who is a walking-talking example of why women should go back to cooking and making babies.  I mean, if this is the best women can do, then break out the burkas!  OK, just kidding.  But she is such a Barbie-doll and an airhead.  She has actually set back the woman's movement by a decade or more, at least.  I think most women actually cringe when they hear her talk, just as Blacks cringe when they see old videos of "Amos and Andy".

But seriously, Gibson was being passive-aggressive with that question.  Why?

Well, it is a baiting question to be sure.  Since Sarah Palin is the rah-rah Conservative, she has to support President Bush and everything he stands for.  So, of course, she supports the Bush Doctrine - whatever the heck that is!  But she also knows, that if she says "Yes, I do" the next question will be, "In what way?"

And here is where the question is a trick:  There is no such thing as the Bush Doctrine, except as a catch-all label tacked on to a number of Bush policies by the media.  Bush did not announce anything as his "doctrine" - rather, that was a media label:

The Bush Doctrine is a phrase used to describe various related foreign policy principles of former United States president George W. Bush. The phrase was first used by Charles Krauthammer in June 2001 to describe the Bush Administration's unilateral withdrawals from the ABM treaty and the Kyoto Protocol. The phrase initially described the policy that the United States had the right to secure itself against countries that harbor or give aid to terrorist groups, which was used to justify the 2001 invasion of Afghanistan.

Different pundits would attribute different meanings to "the Bush Doctrine", as it came to describe other elements, including the controversial policy of preventive war, which held that the United States should depose foreign regimes that represented a potential or perceived threat to the security of the United States, even if that threat was not immediate; a policy of spreading democracy around the world, especially in the Middle East, as a strategy for combating terrorism; and a willingness to unilaterally pursue U.S. military interests. Some of these policies were codified in a National Security Council text entitled the National Security Strategy of the United States published on September 20, 2002.

The phrase "Bush Doctrine" was rarely used by members of the Bush administration. The expression was used at least once, though by Vice President Dick Cheney, in a June 2003 speech in which he said, "If there is anyone in the world today who doubts the seriousness of the Bush Doctrine, I would urge that person to consider the fate of the Taliban in Afghanistan, and of Saddam Hussein's regime in Iraq."

And of course, Sarah Palin supports all of those interpretations of what is the "Bush Doctrine" - she has made such policy announcements on numerous occasions.  If anything, she thinks Bush was a wimp for not going far enough in invading countries, breaking treaties, and torturing prisoners.

Because, if you think about it, only Democrats talk in terms of the "Bush Doctrine", not Republicans.  And since there is no announced definition of the term, the question is vague and open-ended as "Do you agree with President Obama on Libya?"

"Yes, Charlie, I agree with President Obama that there is a country called Libya and it exists in time and space.  Next question?"