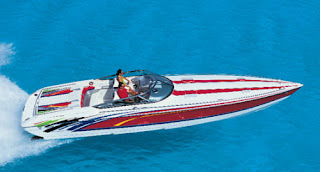 Some people in this world just take what they want.  For a while, it seems.

He had no fear of bankruptcy, the IRS, or the re-po man.  He would buy a brand new car, usually out of State, and then drive it for as long as he could, until they repossessed it - that is, if they could find it.  He would tuck away cars at his girlfriend's house or a friend's house, or move constantly.  If they can't find you, they can't re-po the car.  And he knew that.  And oftentimes, he managed to keep doing this for a year or more, before the re-po man finally put the stinger on his ride, or he got sued by the finance company.

At that point, he would just go out and buy another car.  For some reason, car dealers are so hot to make a sale, they will loan money to anyone.  They all claim to be "bad credit specialists" - and now you know why interest rates are so high for ordinary folks.

He had a boat, too, that sank under mysterious circumstances, at least twice.  Each time, he got insurance money, new engines, new carpet, and somehow ended up with money left over.  The last time he tried it, he had put a title loan on the boat, and unfortunately for him, the insurance company got wise to the deal, at the last moment.

But again, it didn't stop him.  And when the Real Estate market took off, he found no shortage of people willing to give him "liar's loans" even though his credit score was, at that point, an irrational number.  He bought, he flipped, he spent.  And he lived large, for a while, until the whole market collapsed.  And then he just walked away and started over again with something else.

A lot of people live like this, surprisingly.  If you are an amateur landlord, as I noted before, they will seek you out like a cruise missile.  And folks like this are one reason why we used to have strict credit laws and why banks had strict credit requirements.  When you loosen the reins, the con artists will have a field day.

But still many more folks live a lifestyle that is arguably legal, but not far dissimilar from my smooth operator friend.  They go heavily in to debt for everything in their life, and then just make the minimum payments on everything.  When they finally run out of credit, they declare bankruptcy, walk away, and start over.  Well they did, until bankruptcy reform legislation took hold.

Today, the debt lifestyle is coming crashing down around our ears.  And many folks are demanding personal bailouts of their own.  They want to keep the car, the house, the boat, thank you.  They just want to get rid of that pesky mortgage.

And increasingly they are doing it.  As I noted, cram-downs and lien stripping are two ways to avoid paying off your debts, and in some cases, cutting your debts to pitiful amounts - in certain circumstances.  In other cases, people just walk away, start over, and accumulate a new mountain of debt.  I know some folks who have done this, several times.

The only downside is that it seems "unfair" to those of us who save our money, live frugally, and live within our means.  After all, we are working hard, doing the "right thing" while others are spending on jet skis.  Is this the reward for hard work?  A total screw-job?

While our mixed-up society is sending mixed messages, I think in the long run the folks who live within their means are better off.  Why?  Well, eventually, you run out of money, you run out of income, you run out of work - and you run out of credit.  And when this happens, you are old and decrepit and can't work anymore and have no savings or assets.  And trying to live on social security, at that point, is damn near impossible.

So the fellow in debt up to his eyeballs looks like he is having fun, to be sure.  But over time, the lifestyle is corrosive.  It is like smoking, overeating, or not exercising.  It won't kill you right away, but over time, it has a cumulative effect, and one day you wake up and keel over dead of a heart attack.  And of course, you've felt like crapola for years before then, too.

Doing what is right for you personally oftentimes does not yield immediate rewards.  So it is tempting, at times to splurge on yourself, to spend more than you earn, and have "fun" doing small wicked things.  And when you don't keel over dead, financially, right away, it seems like it must be an OK thing to do.