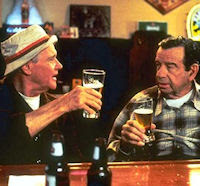 The Atlanta Geriatric Terrorists plot their next move over a couple of beers.
In a recent article in the paper, four Georgia men were arrested and charged with plotting a terror attack against the U.S. Government.  It sounds almost funny, except that, had the attack been carried out, it would have been anything but.
What is it that causes people in an otherwise affluent country to go berserk like this?  One could understand people rising up and taking arms in a country run by a brutal dictatorship - and by this, I mean one where the fearless leader tortures citizens to death, not forces them to buy health insurance.
But to some folks, the difference is trivial.  They are being put-upon, and that's that.  Never mind that they are likely overfed, overpaid, and overstimulated, compared to the rest of the world.  Never mind that, compared to the rest of the world, they are incredibly lucky.
What causes this?
Again, I think the issue is that people compare their lives to other people's lives - and such a comparison is specious thinking, as there is always someone out there making more money than you, doing better than you, happier than you.  And thus, your life will always come up lacking, if you use that sort of logic to determine whether you are happy and successful or not.
So these men look at all the wealth in this country and wonder why they don't have more of it - not stopping to realize how lucky they are compared to most and how blessed they are compared to the world average.
The second thing, of course, is the media.  And this is why I stress that it is so important to unplug from television, radio, newspapers, and the like, so you can get a real perspective on your life.  No doubt these men were listening to talk-hate radio all day long, with its popular hosts decrying the end of the world - and the end of the United States as we know it.
These radio (and television and internet) hosts will get you to believe that the world is going to hell in a hand-basket since Obama was elected, when in fact, not much has changed, really, over the last two years, other than to have a painfully slow economic recovery.
And like the end-times theologists (who are often in the same camp or on the same radio channels) they will point to this or that event in the news as "proving" they are right.  After all, it was foretold in the Bible that Greece would default on its debt - as one of the seven signs of the Apocalypse!
Funny how they always tell us this stuff after it happens, and not before.  I mean, if it was foretold, why couldn't ya warn us?
But even if you are not a Conspiracy Theorist, Wall Street Occupier, or End-Times Theologian, it pays to unplug from the media and the unhealthy messages it inundates you with.
The first message that the media inundates you with is that it is to be taken seriously.  Think about this.  The evening news today has all these scrolling text things and flashing logos (with sound effects) on the screen.  Have you ever actually read any of these?  Talk about subliminal advertising.  Most of it is nonsense - gibberish.  They scroll stock sales on the screen during a financial show - as if you could glean something useful from that.  It is just wallpaper to enhance the "seriousness" of the media.
After all, you wouldn't want to be lead to believe that the almighty news programs were put on by a bunch of amateurs from the entertainment division who are more interested in sensationalism and ratings than they are in reporting basic facts - right?
Just turn it off and turn away.  It is all sound and fury, signifying nothing - if it weren't for the toxic messages it spews on both a National and personal level.
And then there is the advertising - which often is part of the programming these days - even the News.  John Stewart did a funny montage the other day of clips from various "News" programs, each reporting the startling "News" that - yes, wait for it - the McRib is back!  Again.  Every year.
It is no coincidence, of course, that McDonald's is a huge advertiser on television.  The program directors know who is paying the bills.
But the constant barrage of advertising will program your brain and burn into your memory the idea that you should be consuming more.  It is like the barker at the Circus - you need a new iPhone (which is presented as a "news" segment) or a new car, or a new deodorant, or whatever.
And these are all horribly bad normative cues.   And if you let yourself be programmed by this junk, your brain will start to believe weird things - like that Glenn Beck isn't insane, or that one brand of toothpaste is better than another.
Just walk away from the mass-media.  It has nothing to offer you but depression, death, over-consumption and unhappiness.
Newer Post Older Post Home