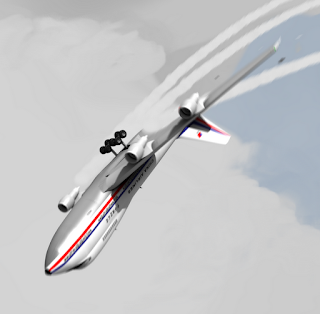 Spatial Disorientation remains a big problem for both commercial and general aviation aircraft, when a pilot tries to fly in IFR by the seat of the pants.  In a similar manner, financial disorientation can distract a person from their personal financial situation until it is too late.

If you read NTSB reports, they tend to sound about the same, over time.  In far too many cases, people become disoriented and crash their own planes.  Even commercial airliners fall out of the sky when pilots become confused or distracted and either stall the plane, or fly it right into the ground.

And when this spatial disorientation occurs, the pilot is often unaware anything is wrong, until it is too late.  Since the plane enters a smooth 1-G "death spiral" they feel, flying by the "seat of the pants" that the plane is straight and level.  Until, that is, a wing tears off or they fly into the ground.

And in every case, the Ground Proximity Warning System is the last thing heard on the voice recorder.  "Terrain, Terrain!  Pull Up!"

What causes these "death spirals" in aviation?  What causes us, as individuals, to ignore warning signs of impending financial doom and fly into the side of a mountain - figuratively speaking?

Inexperience is part of the problem.  Oftentimes, we fail to recognize the symptoms of the death spiral, unless we've be caught in it before - and managed to survive.  But even folks who have had a "close call" often fail to learn from it and repeat the process over and over again, until they finally do it one time too often and crash.

And the problem is, during the "death spiral" everything seems normal and "feels" right.  How can the plane be crashing when my coffee isn't even spilling?  We can't be upside down, right?  A 1-G turn can do that.

In a similar manner, people's personal finances can go into a "death spiral" and they won't be aware of it until it is too late.  By the time our Ground Proximity Warning System kicks in, you have only seconds left to breathe.

For example, Joe and Suzie Suburbia live near the Capital City and own a nice home.  They have brand new cars and put the kids in a private school.  They eat lunch out every day, and each drives to work separately, for convenience, even though they work only blocks apart in Capital City.  Suzie gets a designer coffee every day on the way to to work.

The whole family has cell phones with an unlimited texting plans.  The kids all have the latest video games and Aeropostal t-shirts.  And they have 500 channels of cable-TV, and a TV in every room of the house. Every three years, Joe and Suzie lease new cars.

Joe and Suzie think this is all just fine - they are living the American dream, after all, and are both making "good money" at their jobs - over $200,000 combined income.  And every month, they are able to pay all the bills on time.  They are not funding their 401(k) as they would like to, but hey, they are young, and have time to do that later, right?

The one thing that nags Joe like a faulty air speed indicator, is their increasing credit card debt.  Years ago, they "paid off the balance every month" and felt that they were doing OK - what with the frequent flyer miles they were accumulating.  One year, they cashed in the frequent flyer miles and made a family trip to Disney World.  The cost of the trip was a little more than they figured on, and for the first time, they did not pay off the entire balance on the credit card.  The interest charges were  pretty staggering.

And within a year or so, their credit card debts started to snowball into the tens of thousands of dollars.  They were making good money, getting raises, so they spent more.  Take out meals, delivery pizza, dinners at chain restaurants, gifts for the kids, small vacations, large vacations, and of course, new electronic toys.

One day, Joe was perturbed to realize they had close to $50,000 in credit card debt.  This sounds outrageous to some folks, but seriously, I know personally, several Joes with this level of debt - including myself at one time.  Joe and Suzie cut back on their savings and their 401(k) contributions, "temporarily" to help get this debt down.  But the debt is so huge and the interest so high, it is hard to do little more than chip away at the debt.

So, Joe and Suzie decide to refinance their house, pay off their debts, and "get a little breathing room" to get around what they perceive to be a one-time "difficulty" or aberration in their finances.  They pay off the credit cards, but do not close the accounts.  And the credit card companies "reward" their financial acumen by increasing their credit lines, announced cheerfully by cover letters sent to them that contain lots of exclamation points!!!

Joe and Suzie want to believe that they are pretty smart people, and so they think of themselves as being "smart" and financially responsible, and moreover "rich" compared to their neighbor across the street who - if you can believe this - has been driving the same old Camry for 10 years now!  Poor people, they are so pathetic!

But Joe and Suzie's personal finances are losing altitude quickly, but they fail to realize it.  They intentionally ignore all the other warning signs - convinced that those gauges are broken and that their stuck altimeter is "right" - after all, no one is foreclosing on them today and they still have credit left on their credit cards, right?  And they are still making all the minimum monthly payments - right?

What they are doing, though, is taking on more and more debt, over time.  So their personal net worth is actually decreasing.  And worst yet, it is decreasing on paper, as their net worth is based on some pretty specious valuations of Real Estate and Stocks in their 401(k) plan.  But all seems well, so why bother taking action now?

And they can't be doing anything "wrong" in piloting their personal finances - after all, according to the television, their lifestyle is "typical" - and all of their friends are living a similar lifestyle as well!

And they can go on like this, for years, sometimes.  They get into the death spiral, and then pull up at the last minute - refinancing everything in yet another home equity loan.  But they are losing altitude with each loop.

And then, one day, they hit the side of a mountain.  The economy wobbles and becomes unstable.  Housing values drop - cutting off their funding options.  Their 401(k) value drops. One or more of them loses their job - which is akin to losing an engine in flight.  Or worse yet, they delude themselves into thinking they are doing so well that one of them quits their job.

The subsequent crash is inevitable.  Since they have no altitude (savings) to trade-off for speed, they can do little more than auger into the ground in a glorious fireball.  Another couple bankrupt, foreclosed upon, and likely divorced.  And yet, they were making well over $200,000 a year!

How can we avoid spatial disorientation?  For starters, maintain your altitude.  If you see your savings dropping, or your rate of savings drop, take this as a warning sign to be taken seriously.  And while your altitude over the ocean may be 10,000 feet, bear in mind that when you fly over a 10,000 foot mountain, your altitude drops to an effective zero.  And savings and investments work the same way - you can have a hefty balance in your 401(k), but it can drop off rapidly if the market goes south.  You can't be too rich or too thin - or have too much altitude.

Second, don't be distracted by broken gauges and erroneous instrument readings.  The television is not a good instrument for IFR - it does not provide you with good solid data on where you stand, financially.  And in fact, if you use the media as your artificial horizon, you will likely crash.  The TeeVee is one glass cockpit display you should avoid at all costs!  Stop taking your normative cues about spending from the TeeVee.  I cannot emphasize this enough.  Best to just stop watching it, period!

Third, don't be so distracted by one instrument reading that you ignore all others.  In more than one case, airline pilots have flown planes right into the ocean, convinced that a chorus of alarms and warnings are all "wrong" while they blindly assume that the one broken instrument in the cockpit must be right.  The altimeter says they are at 10,000 feet and their speed is increasing.  The Ground Proximity Warning System is saying they are about to crash and the stick shaker says they are about to stall.  Not understanding how the instruments work, the pilots blithely ignore good data and accept bad, not realizing that a 2" strip of duct tape over the pitot holes can cause both the altimeter and air speed indicator to go berserk.

Similarly, most middle-class consumers will believe themselves to be fiscally solvent if they can pay all their bills every month.  They ignore warnings signs, such as increasing debt load, deceasing savings and savings rates, increasing spending, and increases in interest payments.  Everything is fine, because that one instrument - the checking account balance - is above zero.  So they must be climbing, right?

Fourth -  don't try to fly by the seat of your pants!  That is the last nail in the coffin for most pilots.  The airplane can actually be inverted - flying upside down in a spiral loop, approach a "VNE" speed where the wings tear off at the root - and yet there is no vibration, no acceleration, no disturbance - your coffee cup remains right side up and doesn't even slosh out.  And yet, you are in extreme peril, but don't feel it.

Financially, most of us start out life flying by the seat of our pants - which is fine for VFR flying.  So long as you can see the horizon, everything is fine.  Fly into a dark, cloudy night, and you end up like that Kennedy kid in short order.  But we all do it, when young.  We want a lot of eye candy and electronic crapola, and of course new cars, take-out pizza, cable TV, and cocktails at singles bars.  We spend and spend until we are broke, and for many, this is the first experience with the death spiral - which most of us pull out of and say, "We'll never do THAT again!"

And yet, we do.  In many Spatial Disorientation accidents, the pilot in trouble becomes disoriented again and again.  In one accident, a VFR pilot found himself in the clouds, became disoriented, and ended up in the "death spiral" dive, which he pulled out of at the last moment, as he exited the clouds and realized he was inverted and headed toward the earth.  So what does he do?  He rights the plane, climbs back up into the clouds and does the same thing all over again.  Six times.  Eventually, the poor plane can't take it anymore and a wing snaps off.  End of story.