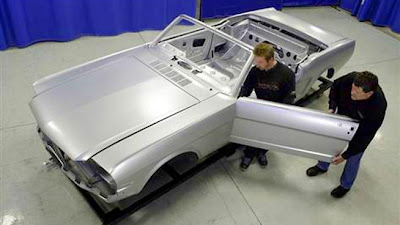 You can now buy an entirely 'new' old Mustang body for about $15,000.  Is restoring an old car a profitable endeavor?
Throwing money at cars is one sure way to go broke.  And I should know, after having thrown money at a lot of old cars, motorcycles, boats, tractors, campers, and whatnot in the last 35 years - over 35 vehicles in 35 years, which is a lot of depreciating machinery to throw money at.

Cars depreciate.  And I don't mean this in the tax sense, but in real monetary terms.  They are appliances, and the more you use them, the less they are worth.

The only exception to this rule is when a car is so old as to be collectible.  And as I have noted in earlier postings, even then, the rate of appreciation is only about equal to the rate of inflation or perhaps less than what you'd get in a savings bond.

If you are approaching the car business from the angle of making money, the only way you'll to it is to be a dealer - buying low and selling high.  Buying and keeping a car as an "investment" is probably not a swell idea.

On the other hand, if you love cars and want a hobby, fixing up an older car can be a pleasant way to wile away the afternoons, and if you approach it right, you actually might recoup some or all of your costs.  You might actually make money at it, but don't count on it.

Why is this?  Well, simply stated, building a car from the ground up, using all new or re-manufactured parts, is a staggeringly expensive proposition.  Just the cost of the parts alone will often exceed the cost of the restored car, when sold at auction - and this does not even address the labor issue.

A simple 1965 Mustang convertible, according to NADA guides, might fetch $16,000 to $45,000 depending on condition.  Rare or special models, such as a Shelby Cobra, could go through the roof, of course.  But the odds that you will find one, in your price range, un-restored, are nil.  And if you did, you'd be better off selling it to a serious restoration shop, as such a car, amateurishly restored, could actually be worth less than as-found.

In many instances, the provenance of an older car is as important as the car itself.  A car with an interesting history, group of options, limited edition model, racing history, celebrity ownership, etc. may be worth more than a "plain jane" car that came down the line.  And a one-owner "unmolested" original car might be worth more than a "hopped up" or modded car, or one that was "over-restored".

And authenticity counts, sometimes.  A 1967 Chevelle SS "clone" is worth less than a "numbers matching" original (although clever people can find ways to make numbers match, if they put their mind to it).

And authenticity goes beyond the car just being "correct" - but also original.  A car that is rebuild from the ground up, with all new parts, may be more reliable and in better shape, but it also may be worth less than one that is mostly original parts.

Taking the Mustang example above, shows, even if you bought one of these new bodies for $15,000, you could easily spend three times that much buying all the other parts that make up such a car (even assuming you have a donor car).  And the labor - well, double or triple that again.  The end result would be a car that would cost more than the collector car market would pay for it.  But it would be a nice car, of course.

In my experience, what ends up happening is that the value of a collectible car ends up being about half what someone paid to fix it up.  "Half of what you have into it" seems to be a rule of thumb (and what you see in advertisements, all the time.

And of course, for collectible cars, driving them is out of the question, as each mile put on the car detracts from its value.  So you can spend several years restoring that old Chevelle - and then have a very expensive large paperweight in your garage - one that you can fire up on occasion to impress your friends, but never, ever drive.

So, I think for ordinary Joes, you have to make compromises.  Do you want a car that you can at least drive on occasion?  Then maybe a concours restoration is not really in order.  Taking the car to White Post for restoration is not in order.  And frankly, if you are an average middle-class person, chances are, you can't afford it, anyway.

And then there is the issue of tools, work space, and time.  If you live in an apartment building, and your only tools are a rusty socket set and a hammer, chances are, the idea of restoring an old car is out of the question.

Even with garage space, the amount of tools needed escalates rapidly and adds to the cost of restoring a car.

So, sometimes, it is worthwhile to walk away from a car project.

For example, I had a teenage friend who bought an old Porsche 356 from a neighbor for $500.  The car was in bad shape - having a lot of rust in the lower body panels and underneath.  He quickly realized, going through the car, that the cost of restoration was far beyond his modest means.  Moreover, any attempt to "restore" the car on a budget would surely destroy its value.  He found that he could sell the car to a collector for a tidy sum and use the profits to buy a more pedestrian, but more readily serviceable car, in better condition.

I've never been interested in restoring a car from the ground up.  I just don't have the time and energy to do it - it is something that you have to dedicate your life to.  And I am not sure I would want one of these cars that is so restored that you can never drive it anywhere.

I have been lucky to buy some fairly interesting old cars - mostly convertibles - and drive them around and have a good time with them, while being able to keep them running and fix them up a bit.  To me, doing things with a car is more important than just fixing it all the time.

And as I get older, the desire to own everything is starting to diminish rapidly.   Having a neat old car is fun - for about 10 minutes.  The joy of ownership is really not much of a joy.   And tellingly, a lot of older restored cars do change hands, fairly often.

I enjoy looking at someone else's old restored car far more than I would enjoy owning it, frankly, at this point in my life.  Not having to work trumps "owning things" in a big way right now.

This is not to say I'll never own another old car.  But frankly, I think I would rather buy something that someone else has already restored that to fix one up myself.  It is a lot cheaper and a lot less hassle!
Newer Post Older Post Home