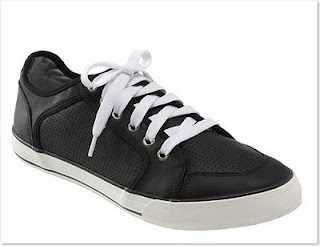 Sneakers wear out long before they wear out.

We actually had a break-in once, and a homeless guy stole the prototypes.  He was quickly caught when a friend of one of the office clerks called him and said, "you have to see the crazy shoes this dude is wearing downstairs!"

At one time in this country, there were two kinds of sneakers, Keds and Converse, and both were about the same in appearance - canvas tops and hard rubber soles.  They provided little cushioning or support.

In the 1970's, the running movement took off, and the Dassler Brothers (Adidas) took off with their leather running shoes, which had expanded polyurethane foam soles.  Tiger Asics entered the market, and a salesman for that company made a set of his own shoes, purportedly with a waffle iron for the tread pattern, and the Nike Waffle Trainer was born.  The rest, as they say, is history.

Fast-forward 20 years, and kids are shooting each other in the schoolyard to steal a pair of Air Jordans off the corpse of one of their classmates.  Suddenly, sneakers are a hot commodity, commanding $200 or more a pair, in some cases.  What's up with that?

The funny thing about modern sneakers is that while their expanded polyurethane foam soles provide excellent cushioning and support, within about a year, the air cells in the foam start to collapse, and the shoes provide hardly any cushioning whatsoever.   The cushioning is important to prevent shock-loading of your joints, and also to return some of the energy you use when running.  Soles that act like springs actually bounce back, imparting energy back to the runner (or walker).

The Nike AIR concept (developed by an outside inventor named Rudy, who licensed the technology to Nike) sought to eliminate this problem, in part, by providing a sealed compartment that, unlike the cells in polyurethane foam, would not collapse over time.  And the idea works, too.  Of course, the irony is, most professional runners change shoes very often, so the idea might be lost on them.  But for the consumer, it actually is an idea that makes shoes more usable for longer periods of time.

Other manufacturers have tried similar ideas - springs and coils and plates and whatnot.  I am not sure if those work as well as the air insert, though.

For ordinary cheap sneakers, with expanded polyurethane soles, however, after about a year of use, they are pretty well shot, from a sole perspective.  The uppers may look good, and they might not be falling apart, but the sole, where your heel and ball of your foot contact, are pretty much toast.  And you may find your feet aching, your back aching, and find it hard to stand for long periods of time, once the sneakers get to be a certain age.

Despite what Billy Joel might say, you don't get more mileage from a cheap pair of sneakers.

However, the prices quoted for sneakers these days are, of course, ridiculous.  The big companies have tried to back away from the staggering prices of the 1990's, when kids started shooting each other over the sneakers, which of course, was bad publicity.

Most all sneakers today are made in Korea or China, of course, other than New Balance, the remaining American-made brand.  And they are very cheap to make - on the order of a few dollars apiece.  So when the shoe retailer asks $150 for a pair, there is an awful lot of markup involved.  Fortunately, since those days, we now have the Internet, so it is easier to compare prices and order online.

Trying to be cheap, I have not bought new sneakers in a long time.  And  a recent examination of my closet reveals a collection of flattened out, worn out, sneakers than don't even look good any more.

I think I am going to toss out all of these sneakers and order something online.  It would clear out some closet space at the same time!  But flatted out sneakers are no bargain on your back.  Time for a change!
Newer Post Older Post Home