Income Disparity - is it "Fair?" 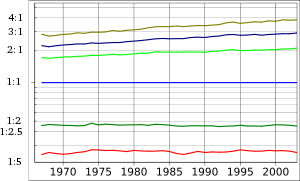 Disparity in wealth is garnering a lot of headlines these days.  And the numbers being thrown around are very confusing.  According to some, nearly half of the "wealth" in America is controlled by only 1% of the population, and in fact, a movie was made about this, a few years back.

However, that 1% figure is talking about wealth, which is different from income.  According to other sources, the top 1% income earners in the country account for only 24% of all income, which is a sharp drop from nearly half.  And the difference between income and wealth is the subject for my next posting - as so many people fail to grasp this simple concept.

Should you care about income disparity?  Should you be outraged about it?  Again, how your neighbor is doing should not really affect your own sense of well-being, should it?  If you are happy and content in life, does it make a difference if your neighbor has "more stuff" than you?

For many people - perhaps most people - their feelings of self-worth and well-being are tied up heavily in their perception as to where they stand vis-a-vis others.  Am I making enough money?  Is some chump who works half as hard as me, making more?  If so, it ain't fair!

And that sort of thinking can literally drive you insane, over time.

I don't make a lot of money anymore.  And actually, I never really made a lot.  A lot of plumbers and electricians probably make more than me.  I am in the 15% bracket, and our combined income is near the median for household incomes in the United States.  What right have I to gripe?

But on the other hand, most people in my profession make a lot more money than I do - some of them make twice, three times, maybe five or even ten times as much.  Should I be making more money?  It would be nice to buy new cars, have fancy clothes, a new smart phone and all that crap, right?

Perhaps.  But with that expensive lifestyle comes a lot of obligations - long hours at difficult jobs, ulcers, stress, and a lot of headaches.  You pay for that lifestyle, in terms of how it ties up your life and limits your choices.

And having that lifestyle is not the same as being "happy."  Some folks chase after the almighty dollar and have status jobs and make lots of money and drive fancy cars, and they claim to be happy.  And perhaps some of them are.  But most are not.  Their only happiness is in flinging their success in the face of others they feel are less important.  It is a happiness derived from status, and the problem with that kind of happiness is that there is always someone with more money, nicer cars, bigger houses, and more status.

And we all do this.  I am sure the hippies in the commune even compete as to who has the nicest yurt.  It is human nature, after all.

But beyond simple jealousy, we are told by many folks on the Left that income and wealth disparity are somehow inherently dangerous in our society, and must be stamped out at all costs.  While I am not against this argument entirely, I am not sure it is the threat to the Union that people suggest.

To begin with, wealth disparity in the US is a direct consequence of the tax cuts to the upper income brackets that were enacted in the last few years - and a consequence of tax cuts in general, over time.  While wealth and income disparity was less in the 1960's, we also have astoundingly high taxes back then.  At one time, in this country, we had a 70% marginal tax rate.  It is hard to believe, in retrospect.

Since then, we have cut Federal tax rates to more sane levels - but spend more and more in terms of government programs.   To take up the slack, many of these programs have been foisted off to the States, which then foist them off to the Counties.  And the States and Counties have to raise revenue through State income taxes, County Property taxes, and State and County Sales taxes.   And many of these taxes - particularly property and sales taxes, act as regressive taxes - taxing the poor more, in terms of percentage of income, than the rich.

So, you'd think the poor would revolt over this, wouldn't ya?  But poor people in this country are not very bright.  That is why they are poor.  So it is not hard to convince them to vote against their own interests.  The GOP convinces them that tax cuts or "tax simplification" will help them, when in fact, it would just be an even greater tax cut to the rich and a huge tax hike on the poor.

And people go along with it.  Because they know if they vote for Herman Cain or Rick Perry, they will also pass a law outlawing Gay marriage or some such nonsense.

So, you can "correct" income disparity, to some extent, if you alter our tax code to be more "progressive" and less regressive - as we did in the 1960's.  But that won't pass a majority vote in both Houses of Congress and get signed into law.

So what do you do?  Well, you can protest.   You can organize and get out the vote.  You can hold up signs and be angry and shout.

Or you can just forgetaboutit.

No, really?  Not be outraged?  It is an option.

It is hard to do, but rather than compare your life to that of say, Warren Buffet or Bill Gates, as an indicia of whether you are happy or not, a better idea is to determine, inside, what you want out of life, and then go and seek that.  And chances are, money is not what will be central to that goal.

Having enough money to get by and put a roof over your head isn't hard to do.  Many folks complain it is - but they want a fancy roof, a fancy car, and gourmet meals, preferably prepared at a restaurant.  They want a luxury lifestyle they can't afford and cry when it all goes wrong.  And for many in the middle class in America, this is their "dilemma".

It takes a lot of personal courage to turn your back on the clamoring and clattering of the media in our society.  To not be on Facebook or not be text messaging or smart-phoning, watching cable TV or whatever, is seen as being "weird" these days.  But I don't do these things - or don't do them anymore.

Why?  Simple. They weren't making me happy, and in fact, were doing quite the opposite.  Facebook was just a depressing waste of time - an obsessive-compulsive behavior I did not need.  I prefer to write - it makes me happy - than to twitter, tweet, or update my "status".  Cable TV was just chock full of poor normative cues - the "depression box" as I call it.

And owning electronic gadgets and paying for services is just a hole in my wallet.  I ditched Cable TV.  I have a 10-cent-a-minute cell phone plan that has costs me about $100 a YEAR, as opposed to per month.

And not only is my life OK without all these things - it is better.  I have more money in the bank and work a lot less hard.  Should I feel sorry for people who felt "cheated" out of their mini-mansion?  Should I feel sorry for a college grad who spent $100,000 in student loans to get an education that no one cares about?  A college grad who refuses to get his hands dirty, but won't bother to learn even a simple skill that is demand these days?

Am I jealous of those "rich people" and all their money?  Not really.  Because I knew these folks when growing up.  And let me tell you, they are not happy at all.   Depression, suicide, mental illness, drug abuse, alcoholism - it was all there, perhaps more so than in the lower classes.  Few of these people were what I would call truly happy.  Insane amounts of wealth, by itself, does not cause happiness.  And in fact, I think it is harder to find happiness when you are wealthy, as opposed to middle-class.

Since I can't change the minds of redneck voters who vote Republican and put Confederate battle flag stickers on their cars, there is little I can do to realistically alter the tax code and redistribute the wealth.  And frankly, I wonder why on earth I should really care if a poor person wants to vote against their own best interests.

It is like those Payday loan places.  You can tell a poor person that they are an utter rip-off until you are blue in the face - that won't stop them.  In fact, they will call you an idiot for not taking advantage of an easy convenient, payday loan!  Wheee!

So, when you see someone driving their car off a cliff, make sure you are not in the backseat.  You can give them a map, and make a rational suggestion that the cliff is not a shortcut.  But odds are, they are going to ignore you.

Worry more about your own life - and where your own car is heading.  In the long run, you will end up better off.  That will have a much greater impact on your own personal life than in protesting the unfairness of it all.
Newer Post Older Post Home