How We Deal With Adversity is the Key 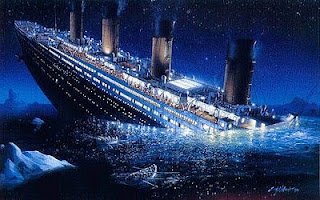 Adverse events will occur in your life.  That is a given.  How you deal with them is the key to living.
Shit happens.  And how you respond to that makes all the difference in your life and says volumes about who you are as a human being.

When bad things happen in your life, you have two choices.  You can sit, paralyzed, in stasis, and wail and cry about the unfairness of it all.  This is what small infants do when confronted with adversity - as they have no other realistic choice.

Today, we see a lot of people protesting, complaining, and whining about how "bad things are."  Things are bad, we are told, because people are in danger of losing possessions like houses, cars, and money.  No one is starving in America (other than Super-Models) unless they work at it.  We are hardly in the same situation as, say, people in sub-Saharan Africa.  We are hardly even in the position of the people on the ship shown above.

And yet, folks on both the Left and Right are whining and complaining about what a raw deal they got.  They have to pay back their mortgages - or they lose their house!  How unfair is that?  They have to pay back student loans they signed documents promising to pay!  The injustice of it all!  They can no longer count on a Union job that pays 4-5 times as much as everyone else is making!  Oh, the humanity!

And their major beef?  Someone else is making more than they are!

Comparing your life to that of others, as I have noted, is fruitless and pointless.  It does nothing to advance your own life and just makes you bitter and angry.  Whining that some "Wall Street Fat Cat" is making a lot of dough, while you got laid off, is pretty silly.  Is it their fault they went to business school and then went to work in finance?  Why didn't you?  Oh, right, you stopped taking math classes in the 9th grade, because "no one needs math in real life".


Maybe you understand now why they pay those folks so much - there are so few people left in the USA who can even add a column of numbers.

When the Titanic sank, hundreds and hundreds of people died, unnecessarily.  In part, this was because of the poor design of the ship - the brittle and fragile steel plates, poorly riveted together, willing to buckle in the frigid water after even a small impact.  And then there are the poorly designed water-tight compartments, that did not extend all the way up to the deck.  And then there was the reckless piloting - going full speed into an ice field.  Those are all things beyond the control of the passengers.

But what meant the difference between life and death for those on-board was the actions of the people on-board after the accident happened.  Perhaps it would have been impossible to save everyone, given the number of lifeboats provided.  But many boats left the ship nearly empty.  Others capsized.  Most of the collapsible boats were never used, as no one bothered to figure out how to assemble or launch them.  Most folks just lay down and prepared to die.  And at least half of those could have been saved.

Myself, I would think I would be trying to make some sort of raft out of deck chairs and life preservers. Or at least try to help others survive.  Do something - anything.  But most did nothing, except mill about and cause trouble for themselves - or each other.