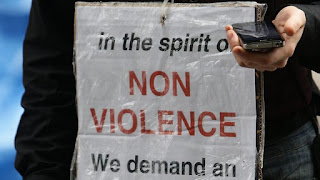 Let's label an entire generation based on the actions of a few people!  It's fun!


The media has yet to label the current generation of young people with some sort of stupid label, like "Generation X" or "Generation Y" or "The Woodstock Generation".  So I will beat them to the punch and label these kids with an ill-fitting moniker of "The Occupy Generation."

Why not?  After all, these stupid generational labels in the past have been poorly applied - labeling an entire group of people based on the actions of a very few.  And moreover, they ascribe attitudes, opinions, and characteristics that often do not apply to but a small minority of people.  The media paints in broad stokes, using a 6" house painter's brush.

For example, I met a fellow Engineer who mentioned that he was a student at Kent State during the shootings.  I asked him what it was like, and he replied, "Well, I didn't really see anything. I remember seeing some National Guardsmen when I was changing classes, but for the most part, I read about it in the paper, like everyone else."

This sort of floored me, as from the media reports, you would have thought that everyone was protesting at the time, when in fact a small group was.  As my friend put it, "I was in school to get an education.  Not all of us were smoking pot and protesting."

And this basic fact is often lost on the media, which draws its reporters and announcers from a more Left-leaning group.  And today, when we do the demographic math, people are perplexed why the "Woodstock Generation" would do things like vote for George Bush.  And the simple reason is, that not everyone of that Generation was of the same mindset then, or now.

And of course, people do change over time.  Even the most Liberal become ever so slightly more conservative - and some extremely so.  You put a little money on the table, and funny things happen to people, over time.

And that is where I expect to see the "Occupy" movement people, in about 20-30 years.  They will, by then, have houses, cars, a good job, and children.  They will be trying to finance their retirement and their kid's college and their mantra will morph from "overthrow the system" to "don't rock the boat!"

But every anniversary of the "Occupy" movement, they will get together and share a joint and reminisce about the "good old days" when they were going to "change the world" and wonder "what the fuck happened to us, man?" and "can you believe I used to wear my hair like that?"