Should you use a PAWN SHOP (No.) 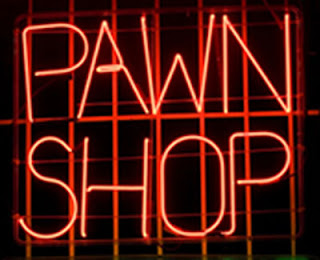 Pawn shops offer no bargains, either for buyers or borrowers.
Pawn Shops are in the news today, and in general, they have been thriving in recent years.  Back in the day, one only saw pawn shops in old "film noir" movies, where Private Detectives would go to hock their gun.

But today, they are more popular and visible than ever, and many offer to pawn anything, including your car.

To begin with, you would think that with a loan secured by the item pawned, the interest rate would be fairly competitive.  After all, if you don't pay back the loan, the pawn shop owner gets to keep your collateral, sell it, and make back his money.  From the pawn shop's perspective, it is a pretty risk-free transaction - or so one would think.

But the loan interest rates can be as high as 20 percent per month, which is an astounding 240% a year.  Clearly, this is not a good place to borrow money.

And as a result, only poor and stupid people would use a pawn shop - or very, very desperate people.  And you don't want to be poor, stupid, or desperate, do you?

And this is why, of course, Pawn Shops are always in poor neighborhoods - because only poor people engage in such poverty financing tricks, which in turn is why they are poor.

So, just don't borrow from a Pawn Shop, period.  If you are hocking your watch or gold ring or whatever, to get a small amount of money at 20% interest, perhaps you should think instead about selling the item you can clearly do without, and use that money instead, interest-free.  Or think about owning less crap you can pawn, and borrow money against, instead of having a lot of crap and paying a lot of money in interest to buy it back from the pawn shop, over and over again.

Title Pawn loans work the same way, except that the car title is used as collateral.  You can still "keep" your car, of course, but now you've signed up for some onerous interest payments, which in many cases, might never be paid off.  Again, no one in their right mind would borrow money on such terms, which is why people who do this sort of thing are not very bright, which in turn leads to them being pretty poor, which then feeds into a cycle of poverty and debt.

But what about buying stuff from the pawn shop?  A friend of mine, many years back, swore by pawn shops as great places to buy used merchandise.  But in the few I have been in over the years, I have not seen any great bargains for sale.  Perhaps they were not interested in selling stuff so much as "other" businesses, I do not know.  All I know is, the prices they quoted for used merchandise were not far off the new prices from retailers.

And again, this fits a pattern.  Shops and stores in poor neighborhoods offer the worst sort of bargains imaginable.  You would think that poor people, having less money, would demand lower prices and that they would get the best deals.  And you would think the rich, having tons of money, would not mind paying more for merchandise, and thus pay higher prices.

But the opposite is true.  The car dealers in our small, impoverished town offer scandalously high prices for automobiles - both new and used.  Drive an hour to Hilton Head, and prices are easily 10-20% lower.  The smarter consumer will not pay more than market value for an item, and the smarter consumer ends up as a richer consumer.

In a way, it is an interesting effect, as it reverses Adam Smith's "invisible hand" theory, which dictates that products always find the best possible price in the competitive marketplace.  It also refutes a lot of nonsense about optimal pricing strategies, which claim that the rich are willing to pay more, rather than less.

But it also illustrates another axiom you have probably heard in life:  the richest man in town is often the most miserly.  And the reason he is rich is that he is careful with money.  Middle-class people spend money like water, and the poor, like it is air.  As a result, they continually strike bad or non-optimal bargains.

So pawn shops, by definition, being poverty-think enterprises, of course will not provide the best prices.

Again, becoming successful in America is not really a big deal.  There is no "trick" to real wealth, you just have to avoid all the clamoring voices trying to induce you into poverty.  We all have the opportunity to accumulate some wealth in life.  Few of us exercise that option, choosing instead, one bad deal after another - usually trading off our long-term security for immediate gratification.

Just say "no" to pawn shops, title loans, payday loans, slimy used car dealers, and the rest of the entire poverty industry that exists to fleece the lowest segments of our society of the few dollars they have.