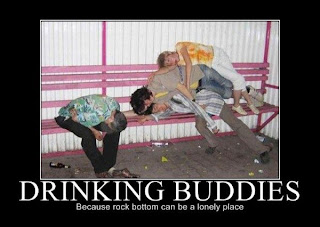 Friends who encourage you to engage in self-destructive behavior are not really friends, are they?


One problem facing young people, throughout the ages, is the tendency for young people to follow the example of their peers, and engage in self-destructive behavior.  A group of teens gets together, and one of them says, "I dare you to smash out the window on that parked car!" and the others giggle.  When the other person refuses, they all chant, "Sissy!" or "Wuss!" or something to that effect.

And before you know it, your son is calling you from the Police Station, and you are wondering why on earth an otherwise "good kid" is vandalizing parked cars. But it happens, all the time.  And not just to kids.  As people get older, they still get goaded and baited into doing stupid things, to be "one of the gang" and also so that others can validate their own bad behavior.

Take the college fraternity - which encourages all sorts of poor behavior as a prerequisite to joining.  You aren't going to be asked to pledge if you prefer to study hard and remain sober, that is for sure!   And not surprisingly, college fraternities regularly end up in the news, as the young members egg each other on to do some very odious things.

Or take your buddies from work.  "Come on!" a friend says, "There's time for one more beer!  The wife will hold dinner, right?".  And before you know it, the husband is 2 hours late, getting home, and crashes the family car into a mail box.  All to appease some drunken friend at a bar.

The problem, as I have noted before, is poor normative cues.  You find yourself doing things you don't want to do, under peer pressure, or to be "one of the crowd" or to not be a "spoilsport".  And you later regret it.

And yes, even adults engage in this behavior, particularly with regard to finances.  People tend to view their norms based on what their friends and neighbors are doing.  Suzie leases a new luxury SUV, so Pam thinks it must be a swell idea - particularly after Suzie makes disparaging remarks about Pam's old, dented (but paid-for) Camry.  Misery loves company, it seems, and people heavily in debt like to hang with other people similarly indebted - it makes them feel "normal" and helps them rationalize that being a debt-slave is OK.

And this goes even for small things.  A friend of mine goes out to "get a Starbucks" with her girlfriends in the office - at least twice a day.  She spends $10 a day, just on coffee, at a job that barely pays $10 an hour in take-home pay.  1/8th of the day just pays for coffee!

But when you point this out to her, she says, "Well, all my friends go there, and it would be weird if I didn't go as well!"

To which I would say, "Find new friends".

Friendship based on mutual coffee consumption, debt, drinking, smoking, vandalizing, spending, going into debt, or whatever, is probably not a really strong friendship.  And if you look around, you'll see that there actually are other people who are not engaging in self-destructive behaviors.  They are just less noticeable, as they are not haranguing you to go out for a drink, a cigarette, or whatever, all the time.

And this applies to all aspects in life.  For example, Fred likes to socialize, but he doesn't have a lot of money to spend.  His pals all want to go out to dinner, all the time, to expensive restaurants.  They make about as much money as Fred, but have staggering credit card debts, which they paid off by refinancing their homes.  Fred doesn't want to do that.  But whenever his friends call up, it is always to to some hot new restaurant, where the bill will easily top $50 to $100 per person, with drinks, entrees, appetizers, dessert, coffee, and tips.  And they always insist on dividing the check equally, so Fred cannot economize by eating and drinking less.

For many folks, this is a perpetual problem, but again, one largely of our own making.   We put our need to be accepted, socially, above and ahead of our own personal need for survival.  Is going bankrupt really worth it, in order to be the "life of the party?"  Is living your old age in penury really worthwhile so you can be a "big shot" with some people you hardly know?

Sometimes, you have to find new friends.

And when I was in my 20's, I fell squarely into this trap.  My friends all liked to drink and go to bars, and I was encouraged to join them, even though I was going to night school and needed my income to pay for school and my home.  But they would hear none of that!  They wanted to check out the "night life" in bars, which is, after a while (a very, very short while) boring as can be.  Nothing interesting or new ever happens in a bar, trust me!

So pretty soon, I was doing stupid things, like cashing my paycheck in a bar, buying a round of drinks for the house, and being a "party boy".  And I was broke all the time as well.  And my friends all did drugs, which is something that rarely improves over time.  I finally woke up to the reality of it all when they started doing cocaine, and then crack.  This was a very bad idea, not to mention horrifically expensive.

Now, funny thing, when I tell that story to some young people, particularly the kids today, who all want to be "homies" and "gangsta's" they think I am "whack".  Why?  Because, to them, your friends are everything, even if they are driving the bus off a cliff.   And when you are 15 or even 25, it may seem like your social circle is the most important thing in your life.  After all, they even made a TeeVee show about it - "Friends" - right?

But eventually, you have to reach a point in your life where you self-preservation trumps the need to feel wanted or accepted by a dubious social group.  Some folks, unfortunately, never reach this point, and squander every dollar they make, trying to keep up with their neighbors or friends.

It is possible to have fun without spending money.  It is possible to be accepted into a group without having to do stupid things.  You simply have to find new friends.
Newer Post Older Post Home