When Being Handy Can Save You Money 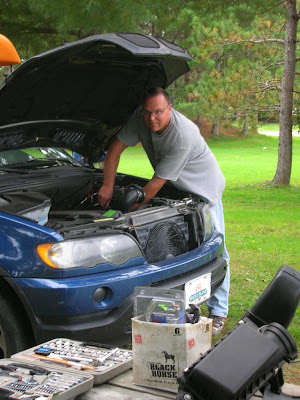 Fixing a broken alternator cost me about $300.  If I had taken it to the dealer, the cost could have been as high as $2000, including labor.  This is one reason I say, if you are not handy with tools, you don't want to own an older BMW - or most any car, for that matter.

Increasingly, we are living in a Cargo Cult society - where we have staggering levels of technology available to us, and yet most of us are totally incapable of changing even a flat tire on our car.

And I kid you not on this.  Yesterday, I was driving down I-95 to Jacksonville, and I saw someone on the side of the road.  They had to call a tow truck to change their tire.  And there was the tow truck driver, putting the doughnut spare on their car.  What ever happened to self-reliance?

Or even more amusingly (or frighteningly) I see people evolving home-brewed solutions to technical problems, based on little more than trial and error or superstition.  I was using my credit card at a swipe terminal the other day, and the clerk swiped the card rapidly, and of course it did not read.  So she wrapped it in a plastic bag and did it again - this time more slowly.  Of course the card read now, but she was convinced that the plastic bag somehow made the magnetically encoded stripe more readable.

Increasingly, I find that people are using good-luck charms or home-spun cures for their technological woes.  And of course, many folks just give up and toss usable computers and cars in favor of new ones that are under warranty.  Or they buy extended warranties which are overpriced and provide little in the way of real "peace of mind" but at a staggering cost.

And it is sad, as only a few years ago, we were a nation of doers.  If your car broke down, you fixed it.  Today, people don't even try, convinced that computers are too complicated and fuel injection is too mysterious.  But to me, as an Engineer, I find cars today far easier to work on.  After all, the horrible analog features of a carburetor never quite work right, even when "in tune".  Electronic fuel injection either works, or it don't.  And chances are, replacing some inexpensive sensor or part usually fixes the darn thing - which lasts far longer than any carburetor ever did.

During our trip to Labrador, our alternator died on the X5.  This is not unusual, after all the car is 10 years old and has 125,000 miles on it.  Of course, today, alternators are far more expensive than the old GM/Delco "one wire" alternators we used to use back in the day.  A rebuilt alternator for an "old school" car can run you as little as $35.  Today, a Korean-Made alternator for a GM Product can run $175, even on Amazon or eBay.

But of course, for a BMW, everything is twice that, if not more.  One reason I favor the inline-6 model of BMW is that it is far simpler than their V-8 models and more reliable.  The V-8 models use a water cooled alternator  if you can believe that, which is very pricey.

How pricey?  Well, I called the Halifax BMW dealer in Nova Scotia and they wanted nearly $900 for a rebuilt alternator for my car.  The water-cooled V-8 model can run close to $2000 at some dealers!

Needless to say, paying $900 for a rebuilt alternator for a $9000 car seemed rather foolish.  The local NAPA store had one for "only" $300 which is still outrageously high, but far less than what the dealer charges, at least.

Now, bear in mind, that is just the charge for the part.  Installing it is a whole another deal.  The dealer would have wanted to tow the car in ($500, as my AAA towing doesn't cover Canada) keep the car for at least a few days, and charge $150 an hour shop labor, for at least two hours.  We are talking an overall bill of $2000 or more, if I had no clue how to fix the car myself.

In contrast to this, $300 and a couple of hours of my time seems like a pretty good bargain.  The hardest part of the deal was getting the main power wire off, as it had welded itself in place after a decade.  Other than that, two bolts, one plug, and of course the serpentine belt.  And of course, I had to remove the intake to get at it - and the skid plate.

And it struck me that most folks would be in the situation where they would be helpless as the person having their tire changed for them by the side of the road.  Many folks today, particularly younger folks, don't have any real skills, and moreover don't want to learn them.  They view learning practical things as somehow lower-class - as if dirtying their hands would sentence them to a life of poverty.  No, no, none of that!  Just a nice clean, white-collar job for me, thanks.  Preferably something in human resources.

The problem with the ignorance mode of operation is that you will be continually paying more for everything.  Ignorance, in any field, rarely works to your advantage.  And with ignorance comes fear.  And fear causes people to do strange things like leasing cars or buying extended warranties - as they are afraid of an expensive repair, only because today, car repairs have taken on the costs of medical procedures, particularly at car dealers, for no apparent reason.

Note that having even a little smarts can be helpful.  For example, even if you aren't prepared to get your hands dirty, understanding what that little battery light on your dashboard means (dead alternator, usually) is a big first step.  Knowing to take your car to an independent mechanic (whose labor costs are often half that of the dealer) is a good second step.  Those two things alone would cut the cost of the repair from $2000 at the dealer to less than $1000 at an independent shop - perhaps far less.

Skills are valuable things to have.  And yet, I see people claim they cannot do things, and they don't even really try to learn.  How many of you are clueless about your own computers - computers you have been using for 10 or 20 years now?  And if you think about it, you probably will be using computers for the rest of your life - maybe another 40 years or more.

Just an idea, but maybe it would be worthwhile to understand how to run Spybot and how to defrag your hard drive, considering you plan on doing this for several decades.  But few want to learn, and even if you teach them, they seem to have a knack for unlearning in a matter of minutes - mostly, I think because of their internal prejudices that "I can't do this" or "I don't understand this" or "I don't have the skill" or, worst of all, "I'm afraid I might break it".  Good old fear again, causing us no end of troubles.

Fear is something to overcome.  If you talk to most mechanics, even professionals, they will tell you that it is par for the course to break things, when you are trying to fix things.  Bolts snap off, wires break, all heck breaks loose.  You often end up having to fix your fixes.  But if you live in fear of this, you will never accomplish anything - and thus be at the mercy of people with no fear.

And I guess that is what it gets down to - conquering fear.  If we let fear dominate our lives, we end up as passive consumers, lead to the slaughter.  And as a result, we get all the raw deals possible.
Newer Post Older Post Home