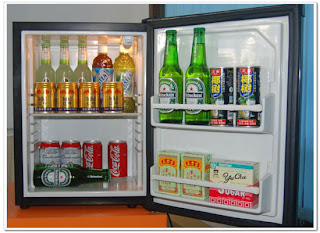 What other financial transaction is as ambiguous as the Mini Bar?


I despise Hotel Mini-Bars, and not just because of the $15 beers.  What annoys me about these things is that the financial accounting of them depends upon the room service maid counting bottles, and if she counts wrong, well, you get stuck with a trivial bill that is hard to correct.

For example, I recently returned from a cruise.  We removed everything from the mini-bar and put it in a drawer, and fill the refrigerator with wine that we had purchased.  At the end of the cruise, I put everything back in its place, just as it was (and I counted to be sure).  And sure enough, the cruise line charges me $9.09 for "bottled water" (this after I bought a CASE of water from them for $48, go figure).

(By the way, on what planet is a bottle of water worth nearly ten bucks?   Only at a hotel mini-bar!)

Of course, during the cruise, this was sort of an ongoing battle - they charged me $9.09 for minibar and I called them up and told them I hadn't used anything and they backed out the charge.  But at the end of the cruise, they did it again, or should I say, reversed the reversal.

So, now my credit card is dinged $9.09.  And whether this is a legitimate charge is a matter of "he said, she said" as there is no receipt or accountability in the whole deal.  It is an entirely undocumented transaction.  There is no way to get them to agree, before you check out, that yes, you did not in fact use anything from the mini-bar.

And that is the problem right there.  Since the accounting of the mini-bar takes place after you leave, you often don't see the charge until you get home - and the charge you see on your credit card may not be itemized, so you don't even notice the charge is different that the amount you agreed on for the "rack rate" of the room.  You may just assume it was a tax or something.

Some hotels try to avoid this problem by installing little micro-switches in the minibar, so that when you take anything out of the thing, it triggers a signal and your credit card is instantly charged.  Fair enough, I guess - at least there is some form of instant electronic accountability.

Other hotels lock the mini-bar and ask you if you want a key to it.  If you refuse the key, there is a record of this and they can't charge you.  Even better.

And still other hotels do away with the mini-bar as being a huge hassle and not really a money-maker.  After all, since everything is so wildly overpriced, no one uses it, and it consumes electricity and someone has to stock it and check it.  And a classy hotel has room service anyway, right?

This is, of course, not the first time I have been stung by the Mini-Bar.  At one time in my life, while traveling on business, I thought, "Why not have a $15 beer and $4 mini-can of Pringles?" - thinking that since it was tax-deductible as a business expense, that made it OK.  Of course, it was a stupid financial transaction.  For the nearly $20 spent, I could have had a light supper or a while six-pack of beer.

So I opened the top of the Pringles, and.... some cheeky bastard had opened it before me!  They had eaten all the chips and then put the package back in the mini-bar!

This left me in a dilemma.  If I put the package back, they would accuse me of the crime.  If I left he package out, I would be paying $4 for someone else's Pringles.  I called the front desk.  They sent up the hotel detective (I kid you not) and explained the deal to him.  He said he would take care of it.

And guess what?  When I got the bill, there was $4 on it for the phantom Pringles.  So now, I have to make a big deal at the front desk about $4, while the clerk snidely insinuates that I am a Pringles thief.  Suddenly, a nice stay at (what I thought was) a classy hotel, ends up as this nasty customer-service scenario.  Sucks all the fun out of it.

And the temptation is to say, "Well, its just a few bucks, why sweat it?"

And that is the beauty of the mini-bar!  You can get people to pay for things they don't even consume!