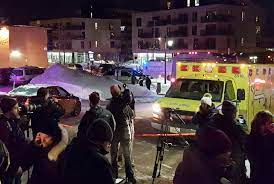 What makes something a "top story" and what makes it go to the back page?  The political views of the editor is what.


I have (had) three news apps on my phone, New York Times, NPR, and the BBC.  Of the three, the BBC is the most interesting, as it has more "world news" and the news of the US is from a slightly different and refreshing perspective.

This morning, the world is reeling from another terrorist attack, this time in Quebec. It seems like an unlikely place for a terror attack, and not much is known about it so far.  There are conflicting reports whether the attackers were anti-Muslim or Muslim terrorists themselves (there is more Muslim-on-Muslim violence in this world than Muslim-on-anyone else).
UPDATE:  The young man who committed the crime claimed he was not Islamophobic or a terrorist, but his friends claim he was a big fan of far-right politician and xenophobe, Marie Le Pen.  You can connect the dots - a young man with mental health issues, set off like a windup soldier.  There are so many of these shootings it is hard to keep track of them, and frankly, I had forgotten about this one.  Sad, ain't it?

Regardless of the causes, it is a front-page story.   Or is it?   The BBC certainly thought it was.

The New York Times and NPR, to their shame, thought it was far less important, and decided to run with more rants about Trump - about news that was already days old.

Well, the attacks in Quebec don't fit a liberal narrative, no matter what the eventual cause is determined to be.

Well, actually, they can be real jerks just like Americans.   But since there are fewer of them, we tend to notice them less.  And since the French/English divide doesn't make much news across the border, we don't realize there is a simmering and festering hatred among many Canadians for their own fellow citizens.  But for the most part, they are decent folks - like most Americans are, if you strip away the stereotypes.

And while bringing guns into Canada is a pain-in-the-ass, it is possible to do, as least with regard to hunting weapons.  And Canadians do own guns.  I have friends who have brought long weapons into Canada, and provided you fill out the paperwork and procedures, it isn't hard to do.   One friend was turned away, though, when he was asked what he wanted his shotgun for.

"Protection!" he said (he does watch Fox News too much).

"Protection from what, eh?" the border guard said (I added the "eh?" for effect).

Wrong answer.  The correct answer was "Bears" and that gets you in.   Remember that the next time you cross the border.

Of course, fully automatic AR-15's are less common in Canada than in the USA - although they are pretty rare here as well.  Semi-auto?  You can buy that at Wal-Mart in the US.  Full Auto?  You need a permit and need to know someone to own one here.

But this story doesn't fit a liberal narrative about Canada on a number of levels.

First, it doesn't fit the narrative about gun control.  Yes, gun control in Canada works - in preventing law abiding citizens from shooting their family members in a fit of rage (the cause of most gun crime in America).  No, it doesn't keep a terrorist from bringing guns in, particularly given the long border between Canada and the US - a border that is largely un-patrolled and about half water.

Second, it doesn't fit the narrative of Canadians being better than us.  If this was a hate-crime carried out by some Quebecois, it shatters the image of Canadians as tolerant people who are free of the base hatred that infects so many Americans.   But reports are emerging that regardless of who carried out this crime, that anti-Muslim feelings are high in Quebec - and other parts of Canada - and that "hate crimes" in the form of arson and leaving pig heads on the doorsteps of mosques - have occurred.

Again, this doesn't fit the narrative.

Third, if it turns out to be Muslim-on-Muslim terrorism (e.g., Sunni v. Shia or whatever) this also doesn't fit the narrative of Islam being a "religion of peace" anymore than the narrative of Christianity being a religion of love (read your history about Catholics v. Protestants).  The narrative the liberal media wants to push is that terrorism among Muslim countries isn't based on religion, but geo-political forces.  This narrative conveniently forgets that Muslims are more than willing to kill each other over perceived differences in religious opinion than others.  A Muslim who doesn't believe as they do is an apostate, and that's worse than being Christian.  Christians are just ignorant of Islam, they are not guilty of believing in the wrong version of it.

So you see, this thing doesn't fit the New York Times masthead three ways from Sunday. It is an awkward incident that brings up a lot of dirty laundry about Canadians, Muslims, and gun control, and of course it happened in another country.  So the outrage about Trump goes to the top of the news pile - an outrage already tempered by the fact that Trump is backing down on his "Muslim Ban" by letting in green-card holders, and after a Judge issued a stay allowing people already in the country with visas to stay.  The Muslim-ban has already backfired on Trump, and really isn't much of a story - compared to what is happening in Quebec.

It is interesting, to say the least, how different news organizations prioritize the news.   Frankly, I am disappointed in both The Times and NPR for putting a days-old story about Trump above a breaking story of people actually being killed, even if it was just across the border.

Of course, the BBC isn't much better, running a piece about transgender people, where one advises a friend how to support her 8-year-old transgender sister.   Eight years old?  Isn't that a little early to be declaring your gender for life?  (I suspect the question was planted by right-wing extremists on purpose).  This sort of stuff is going to backfire....
Newer Post Older Post Home