Do Corporations Pay Too Much Tax? 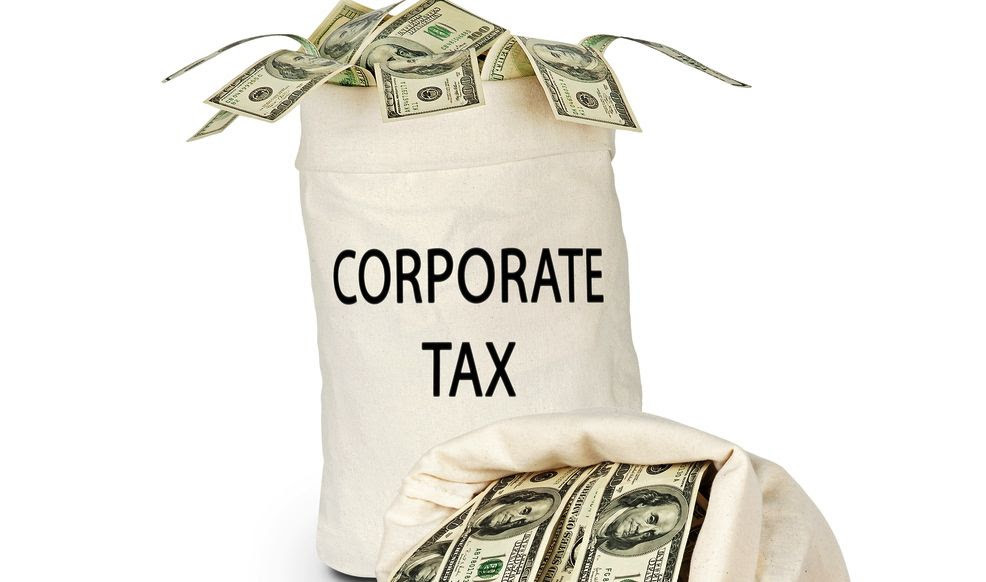 Do corporations pay too much in taxes?


Before beginning this discussion, if you are one of those who subscribes to this knee-jerk, "Corporations are evil, man!" mentality, then read no further.  We are here to have a rational discussion of how corporate taxes actually work not an emotional discussion fueled by bong hits.  Yes some corporations do bad things.   Chances are, you work for one, own stock in one, and do business with one.   If you think corporations are evil, then you need to look in the mirror.

Now that we have that out of the way, and the patchouli-stink hippies have wandered off to the Mother Jones site, let's talk about how taxes really work, as opposed to how people think they do.

Donald Trump has recently proposed a corporate tax holiday to allow U.S. corporations with foreign operations to repatriate their foreign profits, which they are holding overseas. They are holding these profits overseas to avoid paying corporate income tax in the United States, which can be as high as 35%.  One of the arguments made by those on the Right is that corporations in the United States are over-taxed compared to corporations in other countries. To some extent this is true, and one unique feature of the American tax system is that it arguably double-taxes American corporations. On the other hand, American corporations seem to thrive in spite of this onerous tax burden.

As I have discussed before, and any first-year tax Professor will tell you, most corporations pay taxes at two levels. First, they pay corporate income tax which can be as high as 35%.  (Of course, there are so many loopholes - or what we call Laws - that prevent them from actually paying taxes at this onerous rate.)  Second, shareholders pay taxes on dividends and capital gains.   A company can also generate ancillary tax revenues in the form of sales taxes, gross receipts taxes, property taxes, as well as the numerous taxes paid by employees, suppliers, and customers.

Our high corporate income tax remains one reason why corporations try to avoid paying taxes, either by leaving profits overseas, using various legal tax credits and tax deductions avoid paying taxes, or by retaining earnings or buying back stock (which still may incur a tax bill).  None of these things are illegal.   The naive like to talk about "tax loopholes" like they were some kind of accounting trick designed to avoid taxes.  The reality is, these are laws passed by Congress to encourage (or discourage) certain types of behaviors or investments.  If you think these are "loopholes" then you are equally a guilty of using "loopholes" to avoid paying taxes on your home mortgage interest or getting your tax credit for Obamacare.  Shame on you!

Double taxation works in a number of ways.  When a corporation pays out a dividend, it (ordinarily) pays corporate income taxes on that profit.  But the shareholders who owns shares of stock in the corporation also pay tax on the dividend as well. Thus, there's a double-taxation of corporate profits.  If these profits are held back as retained earnings they company may have to pay taxes on those as well, and the resulting increase in share price means the shareholders have to pay capital gains tax.  Buying back stock has a similar double-taxation effect.   Thus, it is very hard to avoid this double-taxation penalty, and theoretically, if you stack the corporate rate with the personal rate, the tax rates could be as high as 70%.

In reality, of course, far less is paid - but it can still be an onerous amount.   If a company can take advantage of some incentives or deductions or tax credits, it can reduce its corporate tax burden - sometimes to zero.   And sometimes, leaving this money overseas is one way they reduce this tax burden.   Every government regulation has an intended effect and an unintended effect, and excessive taxation at any level forces people and companies to find ways to avoid paying taxes.   When you tax yachts in California, millionaires move them across the border to Mexico.  The upper-middle class has to pay the tax - and sell their boat.

On the shareholder side, dividends may be taxed as ordinary income and what rate the taxpayer pays depends on what bracket they are in.  A retiree like myself might be in the 15% bracket.  A high-earner like a doctor might be in the 39.6% bracket.   A really, really high earner can afford to structure their finances so as to pay as capital gains or carried interest at the 15% bracket.   It is damn near impossible, however, to avoid paying taxes at all - although you can defer them in a number of ways, the most familiar to you and me being the 401(k) or IRA.

However, a corporation may pay other forms of taxes - just as we all do.  For example if a company owns a large factory, it may pay property taxes on that factory. It also made pay sales taxes on sales of goods customers, as well as gross receipts taxes in some jurisdictions which taxes the overall income, not necessarily the overall profit.

Gross receipts taxes, by the way, are a really unfair form of tax, in that they tax you regardless of whether you made a profit.   If your business takes in a million dollars in "receipts" you may be liable for $45,000 in "gross receipts taxes" in your jurisdiction (such as Alexandria, Virginia, with a 4.5% gross receipts tax).  Even with a healthy profit margin of 10%, you may have only $100,000 in profits.  The gross receipts tax could amount to almost half your income.  Throw in corporate tax, property taxes, and sales taxes and you may be making nothing.  One reason I closed my "storefront" law practice and became an "independent contractor" was that I could not afford to pay 4.5% on my gross receipts, particularly considering that nearly half my gross receipts were for Patent office fees or foreign attorney fees.   But enough of my soapbox on that.

But a company generates, indirectly, other tax revenues as well.  Each employee of the company from the President, on down to the lowliest janitor, also pays income tax on their salaries and other forms of compensation. These include Federal, State, and local income taxes.  They also pay a plethora of other taxes, including sales, property, and whatnot, which they could not afford to pay if they didn't have a job.

Thus, arguably, a company generates a lot of tax revenue for the government, which is one reason why many municipalities and States have offered tax breaks to attract companies to their regions. Even if they forgo some or all of the corporate property or income taxes, the taxes collected from employees and other sources are still a boon to the government, not to mention the citizens.

Also bear in mind that the company does not operate in a vacuum. If you have an automobile assembly plant built in your State, chances are there will be a number of satellite supplier companies opening up as well. The same tax scenario applies to them, generating taxes at all levels through multiple channels.

What people have learned over the years is that when you start taxing a company to death, companies tend to move away.  Not only do you lose the direct revenue from direct taxation of the corporation, you lose the ancillary channels of taxation as well, which can result in the bankruptcy of municipalities, counties, or even States.

President-elect Trump is proposing a one-time tax holiday for corporations who are holding profits overseas, to allow them to repatriate these profits to the US. This is not a new concept, as it was tried back in 2004 under the Bush Administration. During that tax holiday, hundreds of billions of dollars of profits were repatriated from overseas to the United States.  However, this arguably did not result in the generation of new jobs, as President-elect Trump proposes it will do. Rather than hire more people, corporations to go on a merger and acquisition spending spree, buying other companies, or buying back their stock - to use up this extra cash laying around.

(There are legitimate reasons for doing this.  A company rife with cash is a juicy takeover target.  So it doesn't pay to leave cash laying around in the till, but rather to spend it in one way or another).

Thus, there is no guarantee that repatriating these foreign profits will "create jobs" as President-elect Trump promises it will.

On the other hand, shareholders of these corporations will benefit from increased profits through stock buy-backs, paying down corporate debt, as well as through profitable mergers and acquisitions.

As a retiree living on the dividends from stock investments, you can see which side of the equation I would favor.

On the other hand, it's not clear that this tax holiday would create jobs, and even if it did, how would this work in an economy where the unemployment rate is under 4.6% - an all-time low. If new jobs were created, it would not reduce unemployment by much, but would increase the demand for labor and thus increase wages across the board.

Arguably, this would be a good thing for the working man.  Not so go for inflation, though.

A recent New York Times article argues that jobs would not be created, however.  They argue that during the last tax holiday of 2004 repatriated profits were used merely to buy other companies, which usually results in an economies of scale - and the layoff of redundant employees.  So the Times argues that repatriating profits in this manner not only will fail to create jobs, but directly result in more layoffs.

Companies can operate profitably in almost any tax environment, provided they can plan accordingly for such taxes - and charge their customers accordingly.   When rates go up and down and are not predictable, it makes it so much harder to plan for the future.  And the same is true for any regulation.   Auto companies right now are struggling to offer smaller, more fuel-efficient engines in their cars - with Ford famously putting a four-cylinder engine in the Mustang for the first time in decades.   All of this R&D will go out the door, however, if CAFE standards are re-set under a new administration.

Similarly, predictable and consistent tax policy is far better than wild swings in tax rates or one-time special deals.   When you create one-time tax holidays, it only trains companies to wait for such "specials" in the future, much as the shopper becomes addicted to coupons and sales - as J.C. Penny found out to its detriment.

Sadly, the government seems to prefer to use stunts like a tax holiday or the like to create one-time situations which force companies to scramble to make plans to accommodate these special events.

A better plan than a one-time text holiday stunt would be an overhaul of our tax system to make it more consistent with the tax rates in other countries and to eliminate the double taxation problem.
Newer Post Older Post Home