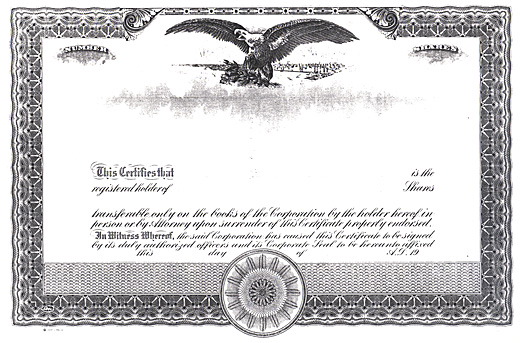 Stocks, like Bonds, have two components, the perception-based part and income part.

Before we address stocks, let's consider bonds.   When you buy a bond, it basically has two components - the principal of the bond and the interest payments.   In the olden days, they had something called "coupon bonds" where the bond itself was worth its face value (say, $1000) and the "coupons" attached to it, each represented an interest payment down the road.   So, for example, maybe the bond would be for five years, and have five "coupons" attached to it, each representing the interest payment for each of the five years, say $100 each, for our example.

This sounds pretty simple at first.  The bond represents the $1000 you loaned to the bondholder, and the coupons represent the $100 interest payments he makes at 1, 2, 3, 4, and 5 year intervals.   At the end of the five years, you surrender the bond and he gives you $1000 back.   It sounds simple, because it is an over-simplification, in part because of how we view this and how I have simplified the example.

Now, say you detach the coupons from the bond, which people did in the old days.  Now you have six separate financial instruments that you can sell separately.   Quick, what is the $1000 "stripped" bond now worth?   If you say $1000, go to the back of the class and spank yourself.   The real answer is, less than $1000, and actually a value you can calculate, based on prevailing interest rates and inflation.   The "future value" of money can be calculated, or at least approximated, and the market sort of bids this up and down.   So the "stripped" bond might be worth $800, let's say, as at 5% annual interest, that would come to about $1000 in five years.

Each of the "coupons" on the other hand, basically is a little bond itself, payable in 1, 2, 3, 4, and 5 years.   And you can use your compound interest calculator to estimate the values of these "coupons" over time.   And of course, this bond and its five babies will vary in value depending on prevailing interest rates, projected future interest rates, the perceived solvency of the company or government issuing them, inflation, and so forth.

Yes, perception raises its ugly head again.  Even bonds have a perception problem - or at least a perception component.  Now compare this to say, a bar of gold.   All these calculations about interest and earnings are out the door.  Gold is based on 100% perception.   There are no dividends, no interest, no profits, no factory making things from raw materials.  It is just an inert bar of gold that you have to hope goes up in value over time - at a greater rate than inflation.

Yes, everything goes up in price over time.   You see poor people marvel all the time about how a cup of coffee was 5 cents back in the 1930's, but this doesn't mean that coffee is necessarily more expensive.  A dollar in 1930 is worth $13.75 today, so a nickel from that era would be worth about 68 cents today - about what you'd pay in a diner for a cup of Joe.  Actually, there is still one place left in America that sells a five-cent cup of coffee, but of course, it is a come-on.

But getting back to perception, it is not enough that an investment keep pace with inflation, which is the problem for gold investors today.  If they bought at $1500 an ounce, they are losing money.  If they bought at $1100 an ounce, they are staying about even.  And since there is income to be made in dividend stocks and since the stock market is going up, yes, an opportunity cost argument could be made if you are parking your money in gold right now.   You may hope that someday the price will go up and you will "get your money back" but in the interim, your friends are making coin in dividends and capital gains.   Opportunity cost arguments are blithering nonsense when purchasing things, but make sense when it comes to investments.

But what about stocks?  Like bonds they have an investment component and a perception component.   The price of the stock is based largely on its perceived value which may include a number of factors, including the profitability of the company, the perceived future of the company, as well as other factors such as buyout strategies.   If a competing company wants to buy out the company you have invested in, the stock price might surge.   The competition may want to merge the companies, which means both would be more profitable (less overhead, less competition, higher prices) which in turn makes the perceived value that much higher.

Note, however, that unlike gold or collector cars, the perceived value of a stock is almost always based on the company's ability to make a profit, either now, in the past, or the future.   No one is going to pay tons of money for a company merely to collect the stock certificates.   Although there is a market for these as collector's items, but let's not get off track here).

Stock prices can also jump up when someone takes control of the company (through a proxy war, for example) and gets a seat or two on the board and shakes things up.  They might decide to spin off unprofitable divisions that were dragging the company down, but that the previous board of directors was reluctant to part with (perhaps due to turf battles or even sentiment).   For example, a private capital firm bought a huge share in Darden restaurants and spun off the money-losing Red Lobster division.   The price of the stock climbed even before they did the spin-off  and showed increased profits.  The mere perception that things were going to change for the better drove the stock up.

But is it possible to have a stock that is entirely perception-based in value?   And yes, sure, there is - and there are a lot of them out there.  And again, language gets in the way.   You could argue that everything is perception-based in value and that is indeed true.  But what we are talking about here are stocks for companies that make no profits, pay no dividends, have no real plans to make profits and yet still have a value in the market based entirely on perception.

Sometimes these are just outright cons.   A teenager in New Jersey goes on the Internet and buys a list of 100 million e-mail addresses.  He then sends out e-mails to 100 million people hyping some little-known over-the-counter penny stock that he bought thousands of shares in the day before.  If even a few people bite on this and buy the stock, the price jumps.  The teenager sells, and makes tends of thousands of dollars, all in a day's work.

What is going on here?   Well, markets are irrational, and people are irrational - or more correctly, they are ill-informed.   And I count myself as one of the latter.   I've bought stocks in companies I knew nothing about simply based on hype in the media.   I try not to do that so much anymore.

A lot of people - small investors - take the gambling approach to investing, and people like the Shouting Guy play toward that mentality.  Buy!  Sell!  Hold! - stocks are talked about like horses at the Kentucky Derby.   The most idiotic thing they tout is "target prices" that are bandied about by self-proclaimed "analysts".   These are people who appear on the Shouting Guy show, or other channels and say oblique things like, "My target price for Acme Widgets is $25 a share!" without explaining why the stock should be worth that much - using math, black magic, or even wizardry.  It is just pulling numbers out of a hat.

And people who "invest" this way are using solely perception-based investing.

Now granted, there are other situations where people are misled by intentionally distorted data.   Enron, for example, merely reported profits by lying about them - the new reality of the Trump Era, a decade or two early.  It is the reason we have an SEC and other regulations in the market.   And it is the reason I say, the Trump era will be euphoric for markets, but the real key in the next few years will be trying to figure out when to sell, not what to buy.

Because perception-based investments tend to crash and crash hard over time.   Speculative stocks end up going bust when expectations are not realized.   During the railroad building craze of the late 1800's, people were buying railroad stocks - any stock - because it was the "high tech" of its era.   Folks failed to realize that a railroad that went from nowhere to nowhere and had no real demand for its services - or at least not enough to cover operating costs - would go bust, no matter how attractive the technology was at the time.   When this perception became known to investors, the stocks crashed, lines were abandoned, and a major recession occurred.

Dividend-paying stocks tend to be safer.   You may not be able to fathom the latest annual report from the company, but that dividend check, in your hand, is not hard to figure out.   But of course, there are instances where fraud has been used to prop up prices of dividend-stock companies.   Since company officers are paid in stock options, they are motivated to jigger-up the perceived value of the company, and one way to do this, is to declare dividends, even when there are no profits.

Unless they commit outright fraud in their financial reporting, however, people figure out what is going on in short order.  You don't have to be a financial genius to see something is severely wrong when the company pays a fat dividend while at the same time reporting losses.   And the market perception usually quickly adjusts when this happens.

But there are still companies out there that have rational plans to actually make money from their operations, produce a profit, and pay back shareholders.   These are often not exciting and sexy companies you read about in the paper.  These are companies that make things and do things in fairly stable technologies.   They take raw materials and labor and produce something worth more than the sum of the components.   You take steel and stamp out cars.  You buy an airplane and fly people places.   You report a profit and pay a dividend.   So long as these industries are fairly static, they can be good long-term investments.

Speculative investments - the "next big thing!" is another deal entirely.   You can buy a stock thinking someone else will pay more for it down the road, and you may be right, or you may be wrong.  People who bought Linked-In, for example, in May of 2016 for $121 a share were happy that Bill Gates perceived it to be worth $196 a share.  Those who bought in February 2015 for $267 a share were no doubt pissed.

And that is the problem with the perception-based part of stocks.   Not only do you have to get the perception right, but the timing as well.   Ask anyone who sold their stock portfolio in January of 2009 about that!