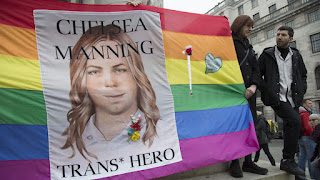 If I was Bradley Chelsea Manning, I would be totally pissed that they used such a shitty picture of me - with 5 o'clock shadow no less!   Is someone who gave away top secret documents a "hero" for wanting a sex change?


There is a reason Donald Trump is President today.   Our country lurches from one extreme to another, and this time, it is the Republican's turn - although not with the candidate they really wanted (they didn't have many good choices, let's face it).

And one of the extremes of the Obama administration was their support of some very left-fringe issues that were certain to galvanize the Right.    And for some reason, "transgender" issues topped this list in the last year or so.  Under the Obama administration, sex-change operations were to be provided for under Obamacare and also provided to military personnel and even some prisoners.

Most Americans, myself included, don't really care one whit whether someone wants to get a sex-change, but has problems with our tax dollars or insurance dollars paying for it.   This is not a matter of bigotry, but money.   When elective surgery is paid for by the government, our insurance rates and taxes will increase.   There has to be a line drawn somewhere, and being transgender is not an "illness" that requires surgery.

I feel the same way about breast implants, or free Viagra, or the over-prescription of opiates, which is not only costing a lot of money but killing off 15,000 people a year.    Funny thing, you say you are against that, and people call you a "heartless bastard" because you have no sympathy for people in pain.   Go figure - people are dying in droves, and you are the insensitive one for saying maybe something should change.    The point is, we need to rein in medical costs, and not everything that it would be nice to do is affordable to do.

Nevertheless, this argument is shot down as "bigoted" without any discussion being allowed.

The issue didn't stop there.  President Obama, through the education department, mandated that secondary schools allow transgender students to use the bathrooms and locker rooms of their choice - addressing a burning issue that affected millions dozens of Americans today.   This did not play well in more conservative parts of the country and some folks asked whether it was appropriate that young children should be exploring gender roles at such early ages - or whether public schools were the place to be exploring "gender identity".

Again, we were told that discussion was not allowed and that we should be praising these kids for their "bravery" - and anyone who felt otherwise was a bigot.   This also caused some head-scratching.

The latest thing is the pardon of Bradley Manning, who has had his name legally changed to Chelsea Manning and has declared himself transgender.    I am not sure what being transgender has to do with his situation -  a situation he created by releasing hundreds of thousands of classified documents to Wikileaks.   By the way, that is a crime - a pretty serious crime, in fact a capital crime.

We are told that Manning had emotional problems related to his transgender issues and that was one motivation behind the release of these documents.    If you read the record, you see that it is one of someone who has had a troubled youth and adolescence, and was something of a loner - and in trouble with authorities before the release of the leaked material.

Sadly, this plays into the stereotype of transgender people as being mentally ill or unbalanced - a stereotype that I would think the transgender "community" would want to walk away from.   But instead, some are positing that Manning is a "hero" of some sort, which again, has a lot of heads scratching.

Some are claiming that the cables and videos released by Manning are a searing indictment of the Iraq war.   Unfortunately, the videos really prove nothing of the sort.  Wikileaks heavily edited one video (by selectively cutting out portions and then time-shift dubbing the audio track) to produce a "Collateral Murder" video that made it appear that US Soldiers were gleefully shooting children and innocent bystanders, when in fact they were attacking "insurgents" with a grenade launcher.   Some reporters foolishly decided to "embed" themselves with these insurgents, and some civilians foolishly decided to come to their aid - all things you really can't make out from a helicopter hovering a thousand feet away.

The balance of the material were State department cables which, while embarrassing, did not really prove much of anything, other than like with Podesta's e-mails, people say what they actually think of one another when no one is listening.   Act shocked.

Calling someone who commits such a crime a "transgender hero" will have a dirty halo effect for transgender people.   You have to choose your heroes carefully.   The fellow in Missouri who tried to wrestle a gun from a Police Officer was posited by BLM to be some sort of martyr.   But as it turned out, he was a thug, and the shooting was justified, and I know this because President Obama himself told me so.   It doesn't help the BLM movement to use him as an example of "police brutality" when he was assaulting the police.  You have to pick your heroes wisely.

Some would say, "What's the harm in this?  After all, the motivations for these things come from compassion!"   And maybe that is true, but some things done in the name of compassion or altruism, can end up being very evil - or at the very least, backfire in a big way.

What we are seeing today is the backlash to this - the push-back, and big time by the far-right.   America wasn't quite ready for gay marriage, and that was accepted only reluctantly.   Taking things to their logical extreme ended up pushing the envelope perhaps a little too far.  Democrats keep losing elections by trying to push too far to the Left.   And sadly, people like Bernie Sanders seem to be dominating the discussion in the Democratic Party - a party he is not even a member of!   Their narrative is the mistake they made was not going Left enough.   More head-scratching occurs.

It is hard to say how far back the GOP will try to push things.   Maybe we won't go back to the "good old days" of gay-bashing and closeted living.   But it seems that the advances made in the last few months will be wiped out in short order.  It also will end up hurting, not helping, transgender people in the long run.

And part of this is because some folks are claiming that someone convicted of espionage is a "Hero".