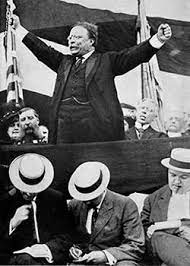 Teddy Roosevelt used the Presidency as a "Bully Pulpit" to advance his populist causes.   Is Trump doing the same thing?


As I noted in an earlier posting, the "genius" (if you can call it that) of Donald Trump is that he doesn't actually do anything, but gives the appearance of doing things.   He is our first (well, second, actually) Twitter President - sending out tweets at 3AM that make people shake in their boots.

Well, that's the perception, anyway.  As one executive noted, you don't want your company to be the subject of a Trump Tweet, even if such Tweets are not legally binding and in the greater scheme of things, mean absolutely nothing.

But when Trump Tweets, people seem to listen and react - even if they don't actually do anything in response.   After Trump tweeted about them "sending jobs to Mexico!" Carrier famously said they were keeping jobs in Indiana in response to generous tax cuts.  Trump wins - but Carrier is still laying off a majority of the workers there.... and moving some production to Mexico.

It doesn't matter what the reality is.   Do something and Trump declares victory and goes home.  Do nothing, and he keeps Tweeting.

Some, such as John Boehner, are saying Trump reminds them of Teddy Roosevelt, in that he thinks himself larger than life.  Others, such as a self-appointed "Roosevelt scholar" claim the analogy is incorrect, in that Roosevelt was an actual hero was was actually larger than life.   I guess that depends on which scholar you talk to.  Some believe his "charge up San Juan hill!" was actually an attack on poorly defended Kettle Hill and that Roosevelt was less a real hero than someone who managed his P.R. very well - sounds a lot like the Donald!

But I think comparing the two is fruitless - there are bound to be more dissimilarities than commonalities.   However, I think one thing they have in common is populism (I think that similarity is hard to refute) and the use of the Presidency (or Presidency-elect) as a "Bully Pulpit" to get issues out in front of the American public and keep them there.

And maybe this is part of the job of President - not merely to prepare budget proposals or policy wonkism or whatnot, but to see the bigger picture and bring attention to things, in effect to shame people into doing things.   You might not be able to force Congress to change a piece of legislation, but you can expose the double-dealing involved or where back-scratching is going on.

Maybe this is where Obama failed.   The left-wing press was full of stories about malfeasance or just plain inaction by the Republican-lead congress.   The media harped on this, but we never heard Obama go into detail - naming names and calling people out.   Maybe he did, but we never heard about it.

Trump merely mentions the name of a company in a Tweet and their stock price drops ten points.  Lockheed-Martin and Boeing - along with GM and Ford - have been victims of Trump's drive-by Tweeting.

The latest, of course, is the midnight attempt by the GOP-lead House to strip all powers from the House Ethics Office.   Drunk on power, the GOP felt they could just do whatever the hell they wanted to, and quietly decided to gut the Ethics Office, simply because they could.

While some in Congress decried this move, it was a Tweet by Trump himself that seemed to turn back the tide.   He couldn't force them to change their minds, but he could shame them into doing so.   Kind of hard to "drain the swamp" and call your opponents "crooked" if the first thing you do when in power is kill off all ethics oversight.

Trump, however, should remember the fate of all populists.   Whether it is Teddy Roosevelt or Huey Long, the general public gets tired of populism after a while and turns on the same leaders they elevated to office.  Or perhaps more precisely, the political machines that the populist attacks, end up biting back.

In the meantime, it will be interesting to see how this plays out.   It could actually be fun.
UPDATE:  It was not.
Newer Post Older Post Home