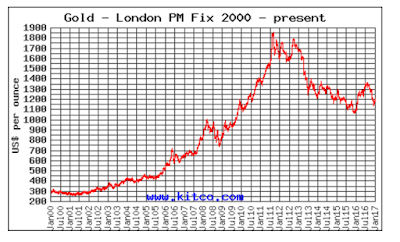 How's that "investment" in gold working out for ya?

A get a lot of flack from gold bugs.  And bitcoin freaks and car collectors and other dreamers and delusional people.   The gold bugs were upset, because I pointed out to them, that historically, as "in my lifetime" gold has been a shitty investment that has bankrupted more than one small investor.

As I noted in earlier postings, it is a fear metal and bought in times of market uncertainty - at high prices - and then sold when the market stabilizes, at low prices.   People sell their stocks for cheap and buy gold for high.  Then they see stocks going nuts and sell their gold for cheap and buy stocks high.

Gold has sort of sunk to an $1100 to $1200 level over the last few years - way off from the high of $1800.   Now, if you are a moron, you might say, "Well this represents a doubling in price since 2007!" which is moronic for two reasons.  First, the moron in question didn't buy his gold in 2007, but probably was trying to buy-and-flip a mini-mansion.   Second, the value of any investment at even a modest interest rate should double every seven years.   It is ten years now, and gold is basically keeping pace with other investments.

The DJIA was at about 12,000 in 2007 and is slated to hit 20,000 shortly.  It has nearly doubled in value over the same time period even accounting for the largest market crash since 1929.  If we choose different start and end points, such as 2009-2017 the DJIA really trounces gold.   Since 2009, the DJIA has nearly tripled in value, while gold went up by maybe 50%.   This illustrates how choosing start and end points can be deceiving, as can all charts and statistics.

But consider this - during that 10-year period, what was the dividend rate of gold?  Trick question, because gold pays no dividends.   Meanwhile, stocks, in addition to capital gains, are cranking out dividends of 2-5% on average.

I thought for a moment in 2016 that gold might hit that magic $1000-an-ounce price.  If it did, and the price went to three figures, it might trigger a sell-off.   Why?  Because the price of gold is based on psychology - the perceived value of it, and nothing more.  It is no different that beanie babies or collectibles.   And if it hit $999 an ounce, the media would do "a story" on it, and people would panic.   And panic is what sells gold to chumps and when chumps sell their gold.  It is a fear metal.

So why do people buy gold?   Well, some large investors are using it as a place to park money or as a means of diversification.   The small investors saw something on television about how you can make a lot of money in gold, probably on Glenn Beck's show.   And a portion of these are "survivalists" who are convinced that the world is going to end and their gold will make them Gods once the "fiat currency" melts down.

The problem is, it probably won't.   The crash of 2008 was the worst since the great depression of 1929, which was far worse in scope and duration.   Somehow, America survived and life went on.   Somehow, we will go on as well.  Betting on the End times is a shitty bet.

Do you really think ISIS was going to establish a Caliphate?  That Islam is going to take over the world?   So far, the track record of Islamic terrorism is pretty shitty.   And bear in mind that the US, Russia, and China are all aligned against it.   No, I don't think the end times are nigh, just yet.

Even before Trump was elected, the signs of a slowly recovering economy were already there.   Productivity was up, wages were up, unemployment was down.   We were clawing our way back to the top of the world's markets.  Manufacturing in the USA will surpass China before Trump leaves office - whether or not he does anything at all.

Trump's bloviating probably won't accomplish much.   But if a Republican Congress cuts the budget and reduces deficit spending, it will help shore up our currency in the long-term.   The melt-down of the EU and Brexit will make the US an even more attractive place to invest.   Instability in China will also be a factor.

The gold bugs are still at it, though.   A few years back, the people with ties to gold sellers were going on talk shows and saying gold would hit $5000 an ounce, "any day now".   There is less talk about that, but the hard-core true-believers (who bought at $1800 an ounce) are still believing - because they have to, in a way.   If they want to get their "investment" back, they have to hope it goes up in price.

But breaking even after years of waiting isn't winning.   You've lost out compared to people who diversified.

Buying metals - and gold is just a metal, like any other - is commodities trading.  And commodities trading is very tricky and not for amateurs.   There is no compelling reason to buy gold anymore than there is a compelling reason to buy zinc.   Both are just metals whose price fluctuates over time.  And without a working time machine, you can't predict where the price will go, other than to speculate.