And So It Starts... State Pensions Go Bust 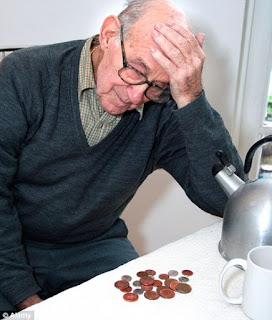 The retirement debacle is only going to get worse.


Many seniors voted for Donald Trump on the premise they he would get "other people" off the government dole - but of course protect their Social Security and Medicare!   But retirement and old age are about to get a whole lot worse in the United States.   People haven't starved to death in the USA just yet, but for many, old age may be a time of penury and hardship.

First, we have the 401(k)/IRA crises, which I have written about before.  My generation was expected to save up for retirement and most of them didn't but instead spent for today on "look at me!" accessories.   Worse yet, the very poor could not afford to set aside even a quarter million bucks to fund their own retirement (and you'd need at least a half-mil just to get by).   This is going to blow up on our faces big-time in about a decade, and it is starting already.

Next, we have a Republican Congress and a Republican President who promise to cut our Social Security benefits - if not abolish it altogether.  For some reason, the GOP simply hates Social Security even though their most reliable voting bloc is on it.   Why this hasn't backfired is beyond me, other than the Democrats have done a shitty job of explaining this to Seniors.  The GOP loves to put out scare stories about how the system is "bankrupt" and the only solution is to cut benefits or put a "means test" on it - rewarding those who chose not to save, and punishing those who did.   Good old Republican values of hard work and thrift are once again rewarded - with a swift kick in the nuts!

But a dwindling number of people in the US still have defined benefit pensions.  Oddly enough, when I talk to people about retirement plans, many have no clue what this term even means.   A defined benefit pension is a pension plan that provides you X dollars a month in retirement, usually with cost-of-living increases and perhaps even with some health care benefits.  These benefits are defined when you are signed up for the plan when you go to work for a company providing such a plan.

A defined benefit pension plan is a contract, plain and simple.  In a way it is like an annuity - the company funds the plan (you may have to kick in something in some cases, in others, not) and you receive these benefits guaranteed in the contract, when you retire or meet certain criteria.   You may have to work a number of years to qualify for these benefits and/or reach a certain age, and so forth.  Your spouse may be entitled to a portion of these benefits once you die.  It is all set forth in the contract - and of course, contacts can be modified or broken.

And this contract may be with the company you work for, or with the union that represents you.   Both are problematic, as we shall see, as both companies and unions have under-funded pension plans or invested in oddball things (or just stole from them, as Jimmy Hoffa allegedly did) or went bankrupt and so on.

For example, if you take an "early out" retirement option with a lump-sum payout, you may surrender your rights under this contract in favor of a one-time lump-sum payment.   Hopefully you are astute enough to strike a good bargain - most are not, and take less than they should have.   And while pension plans are subject to certain rules and laws that other ordinary contracts might not be subject to, when a company (or union) goes bust, you are merely an ordinary creditor in bankruptcy, so you have to stand in line with other creditor waiting for pennies-on-the-dollar in a bankruptcy liquidation.

Of course, there are some safety nets.  You may be ahead in line of other creditors, depending on which debts owed by the company are subordinated and which are senior.  There is also something call the Pension Benefit Guaranty Corporation, which is sort of a pension insurance plan that takes in premiums from pension plans (and the tattered remains of bankrupt plans) and pays out at least something (often less than half) to pensioners.

For decades now, we have seen the nation's pension systems slowly come unraveled.   At first, it was smaller companies going bankrupt, forcing pensioners to become creditors in bankruptcy court.   Their pensions were not guaranteed, per se, but the government formed Pension Benefit Guaranty Corporation would often pay out at least a portion (e.g. 40 cents on the dollar) of the pensioner's payments.

While this is better than nothing, facing retirement with 60% less income than you planned on is a bit of a wake-up call, to say the least.

Over the next decades, more and more workers were shifted over to 401(k) or other "self-funded" retirement plans.   Sadly, many chose not to fund these plans, or severely under-fund them.   Many of these folks will reach retirement age in the next ten years - some already retired, some forced out through early retirement.

Meanwhile, larger and larger companies have gone bust, leaving pensioners with only a portion of their promised benefits.  Large airlines, like Eastern Air Lines, are a case in point.   The Pilot's union insisted that their pension plan be fully funded - only to find out later in bankruptcy court that as creditors, their liability was lumped in with underfunded plans of the flight attendants and mechanics.  Sad story!

Others relied on their unions to fund and maintain their pension plans, with predictable results.

And then, some small municipalities started going bust - unable to pay their pension liabilities, some small towns just stop paying.  A small town in Alabama just stopped paying pension benefits entirely, claiming they could not afford to.

And the Pension Benefit Guaranty Corporation (PBGC) has had to take over more and more bankrupt pension plans until the PBGC itself is facing insolvency when one of the largest pension plans in the country, covering millions of retire truck drivers, went South.  Not only that, a Teamsters pension is facing 20% cuts.

CalPers has cut pensions for retirees of one small town to 60% after the town "opted out" of the CalPers system.  This does not mean that CalPers has gone bust itself (although many question its solvency, given the large liabilities involved).  But it illustrates how many smaller municipalities, particularly those with declining populations, end up unable to afford to pay into the system.

Then there are places like Bell, California - a name easy to remember.  In that small town, the unions took control of the City Council and Mayor's office and then started awarding huge salaries to both salary and union employees.   The salary employees went to jail, the union ones still got paid - the Police Chief was one of the highest paid in the State and stands to receive an enormous pension as a result.

The problem is, the City is now basically bankrupt, and property taxes have to be jacked to the moon in order to pay for all of this.   So people are leaving the town, which now has minimal police and fire protection as a result of the budget crises, and property values are plummeting - leading to more low-income and sketchy people moving in - creating more crime that a crippled police force cannot handle.  Or people merely abandoning houses and walking away from mortgages.  As the city loses residents, the taxes ratchet up and the cycle continues - a death spiral  for the small city.

A city destroyed - by the very government and police force charged with protecting it.  Maybe this could only happen in California, but it is what is happening in many other "blue states" where public employees are holding local governments hostage with threats of strikes and appeals to voters to increase pay for six-figure-salary "starving teachers" whose benefits exceed that of 95% of the taxpayers.

As a result, I think we are seeing a slow-motion meltdown of the nation's pension system, and for some reason, no one seems to notice or care.  We all yawn and thank God it wasn't us - this time around.  Some small town in Alabama, some corrupt little city in California.   Thank God I work for the Federal Government, right?  They will never cut my pension, particularly a military one!

Oh wait, they already did. A couple years back, Congress voted to cut cost-of-living adjustments (also known as COLA) for retired U.S. military members under the age of 62 to be cut by 1 percent below inflation beginning in December 2015.  Of course, this only applies to those who retire early (in their 40's for example) and once they reach regular retirement age, their pension would be re-adjusted to compensate for inflation.   But the problem the bill addressed was a real one - people in government service often are able to retire with a full pension, as early as age 38.

The Civil Service Retirement System was replaced decades ago with a new FERS plan, which combines a smaller pension with Social Security (Government employees did not pay into Social Security on the CSRS plan) and a 401(k) type contribution plan known as "Thrift Savings."   During the transition to FERS, CSRS employees (with 5 years of service) were "grandfathered in" and allowed to keep the old plan.  Nevertheless, there is precedent for altering the terms of the bargain - and no guarantee that Congress won't change it yet again.

Of course, those of us with a 401(k) or IRA are no safer - we could lose our entire retirement due in inflation, bad investments, under-funding, or over-spending.