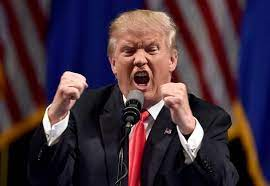 Does Donald Trump have the early signs of senile dementia?

One wonders what goes through the mind of Donald Trump, other than a steady breeze - in one ear and out the other.   It is not his policies that are such a concern - although his obsession with this wall is starting to border on the bizarre.  It is his fixation on personal slights, past victories, and long-standing grudges that is somewhat concerning.   It reminds me, well, of many of my neighbors here on Retirement Island.

Over the last decade, I have been conducting a sociological experiment, studying the elderly in their natural environment.   And the results are fascinating.  Old people, despite their reputation as wise, kind, and considerate, can be very nasty people - evil in fact.   And they often make very poor life choices, either because they have a lifelong habit of poor life choices, or they are too befuddled to figure things out.   Reverse Mortgages, for example, are a poor life choice, but often targeted at the elderly - along with burial insurance.

Men in particular seem prone to dementia at an earlier age.  It starts with a general cantankerousness and a tendency to watch Fox News and shout at the television set.   Politics tend to go from right to far right, and they will regale people for hours about how awful America has become.

The holding of grudges and obsession with perceived slights seems to be part of the picture as well.   What Suzie said at last week's Parcheesi club meeting is just unforgivable!   I'll show her!   That sort of thing.

It is disturbing, because Trump's bill of health is based on a letter his physician wrote in the back of a limo, not a real examination.  His other bona fide is from "Dr. Oz" who is a television quack, at least according to some other doctors.

Trump's Father had Alzheimer's and it may be heredity.   Or maybe he just has an iron problem in his blood - which can also be inherited.   It would explain his skin color.  The latter may be less likely, or at least not explain his forgetfulness and bizarre behavior.

Could Trump be removed from office due to bizarre behavior?  It is possible and the 25th Amendment provides for such removal:

Thus, if his own Vice-President and cabinet say he's crazy, the Vice-President might be able to take over.  There is a catch, however.  The President can send notice that he is fit to serve and resume the Presidency - no doubt first taking the time to fire his disloyal cabinet.  Then Congress would have have to vote on the issue.   If he is still booted out, he can start the process again and again.

A President with Dementia could create utter havoc, as they keep this process going again and again, with the public never knowing from one day to the other who is President and who is not.   Sort of like Georgia's three governor crises.

The problem is, oldsters don't like to go silently into the night.   One elderly fellow we knew was found on the front lawn in his bathrobe, screaming at the squirrels.  When they examined the house, they found he was living in his own filth, hadn't eaten regularly, and was heating the house with the kitchen stove.   His daughter had him put in an assisted living center and petitioned the court to assume guardianship.

Once fed and medicated, the outraged father hired his own attorney and fought the daughter - until his death.   When he was coherent, he could be very charming, which was part of the problem.

A President with dementia is a nightmare to contemplate.   Unless he is incapacitated to the point of not knowing what day it is, he can continue to fight his own cabinet, his own Vice President, and the Congress, to keep his job.