Parlor Games - is the Parlor Coming Back? 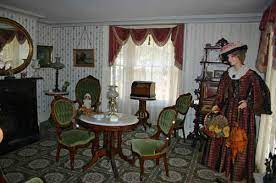 The parlor was a room strictly for company.  Are they coming back or fading away?


In Victorian times, any decent household had a front parlor, where you would receive company who came to visit.   In an era before telephones and texting, you might never know when someone would come "calling" in the afternoon or evening, and you had to be prepared to receive guests on a moment's notice.  So you had a parlor, which was not used on a daily basis, except to receive guests, and as a result, it was easy to keep clean and tidy.

Usually, the rest of the house - the personal spaces - were sealed off from the parlor, perhaps by sliding pocket doors.  So if you had "callers" you could put your best foot forward and receive them in the parlor, and they would not have to see what actual squalor you lived in.  It was kind of a handy thing to have.

I have seen and heard historians say that the parlor was designed to parcel off personal space from public space and that this had more to do with Victorian sensibilities than anything else. But like anything else, you have to take some of these historian's comments with a grain of salt.  I believe the parlor had more practical origins than mere Victorian sensibilities.

The parlor soldiered on, well into the 1960's and even today.  When I grew up in the 1960's, we had a "living room" that no one lived in.  The family room, "den" or "rumpus room" was used for daily living.  It may have been in the basement, covered with shag carpet, and that's where the television was. That's where the family spend most of its time, together.   Today, of course, everyone goes off into their separate rooms, which have their own televisions and computers for entertainment.

The 1960's "living room" had white carpet (that you could never walk on, for fear of staining) and the couch and chairs that we were not allowed to sit in.  It was for company - to put on an image of yourself that was totally false, if you think about it.  I remember one friend of mine whose parents would beat him if he so much as set foot in the "company" living room.   We could never figure out how his parents found out, either.  But since his mother obsessively vacuumed the carpet in a pattern, even one footstep on the rug was pretty easy to spot - we kids were too dumb to figure that out.

Fast-forward a few decades and our generation has decided that such falseness is not right, so instead of the fake living room, we all congregate in the fake kitchen instead.  We build "look at me!" kitchens with granite counter-tops, stainless steel "professional grade" appliances and even "old farmhouse tables" and sometimes fireplaces, and that becomes the new parlor.   In the past, you put your best furniture and your best foot forward in the parlor or living room, today we have the "show kitchen" to show off our wealth.

This is a big change from the past, where kitchens were deemed to be almost shameful things to be hidden away behind swinging doors.  Tiny things - the "Pullman Kitchen" that was little more than an alleyway.  Ironically, though, today we have huge "look at me!" kitchens and even larger "look at me!" parlors that for the most part remain unused spaces.

The problem is, everyone gravitates toward the kitchen, as the hearth and home and where all the food and booze is, if you are having a party.

In the modern mini-mansion, the huge oversized front living room is full of huge, oversized (and uncomfortable) chairs and just for display only.  You glace at it and comment on how lovely it is on your way to the party in the kitchen.   The homeowner, of course, doesn't use it either, but has a "family room" (perhaps also part of or attached to, the kitchen) where they spend their time watching television.

Some are re-thinking the kitchen as parlor.   Some folks are finding that entertaining in the kitchen is uncomfortable and awkward.   To begin with, if you are really preparing food in your kitchen, it can be messy and requires a lot of room.   Kind of hard to do this while 15 people are crowded around your kitchen island, blocking your every move.   Suddenly, you feel like Ina Garten putting on a cooking show for your friends.

It also seems wasteful to have a "living room" and not live in it.   Why bother paying to heat and cool a space and pay for furniture that never gets used?   Why pay property taxes on square footage that just goes to waste?

And hey, isn't it convenient to have a space that is almost always ready for company?   A space that you will know is ready for visitors, even if your kitchen and family room is a mess?

Of course, the problem is, people do gravitate toward the kitchen.   There is an old saying, "every party ends up in the kitchen" and this is true only because the host lets it get that way.

We have an enormous living room, and oftentimes, when we have a party, it ends up in the kitchen, which is awkward as there are few places to sit and everyone is standing around.   There are, however, ways to fix this.

First, put all the food out in the living room or parlor or where you want the party to occur.    This way, people are not constantly migrating back to the kitchen for food - and then staying there.   Second, put the booze in the living room (or whatever room you have chosen for the party) for the same reason.   So many people put the food and liquor in the kitchen "because it's easier" for setup and cleanup.  But it insures that all your guests will go there and stay there for the entire party.

Third, have all the food prepared before company comes.   If you are in the kitchen cooking, people will want to see you and.... gravitate toward the kitchen.   Pretty soon, you are basically giving cooking demos, instead of entertaining and enjoying yourself.

Fourth, if your kitchen has a door, close it.   This is problematic, as in today's "open" architecture homes, most kitchens are open to the living room and dining room and other rooms in the house.  Our ancestors would have been appalled.  To them, a kitchen was something to be hidden, at the very least by some swinging louvered saloon doors, like in the Brady Bunch or the Mary Tyler Moore Show or even I Dream of Jeanie.  Today, we have no doors, so people tend to free-range at parties and... end up in the kitchen.

Fifth, don't be afraid to direct people.   If you are having a party on the patio, then direct guests there - and go there yourself.  If you are in the kitchen, guess where they will go?   And it is difficult sometimes, and people have subliminal motives and sort of Brownian movement in terms of how they wander.   An outdoor party becomes an indoor party very quickly when one or more people who "don't like being outside" or "don't like eating outside" (an increasing number of people in this day and age!) wander indoors.

One reason we decided not to build another pool was this trend.  We used to have pool parties when we were younger and friends would come over and we would sit by the pool and have drinks and snacks or even dinner.   A few years later and people are getting older and sitting outside for some reason seems less inviting.   Outdoor parties become indoor ones.   I am not sure why, but it happens.

Personally, I could go either way on this parlor issue.  We have an enormous living room, as our house was built in 1969, and back then, you had a living room "for company" and a paneled family room "den" (with fireplace) for your personal use.

It just seems like a waste of space not to use the living room for company, particularly since our "den" seats only two people.  So we have made a conscious effort to move the party to the living room, using the techniques described above.   And for the most part, it works.

But if I was to buy another house, I would not specifically seek out a house with a formal living room and a separate "family" room, but combine these into one feature - as it would cost far less and be a lot less hassle.