Why Urban Legends Affect You - Even If You Don't Believe Them! 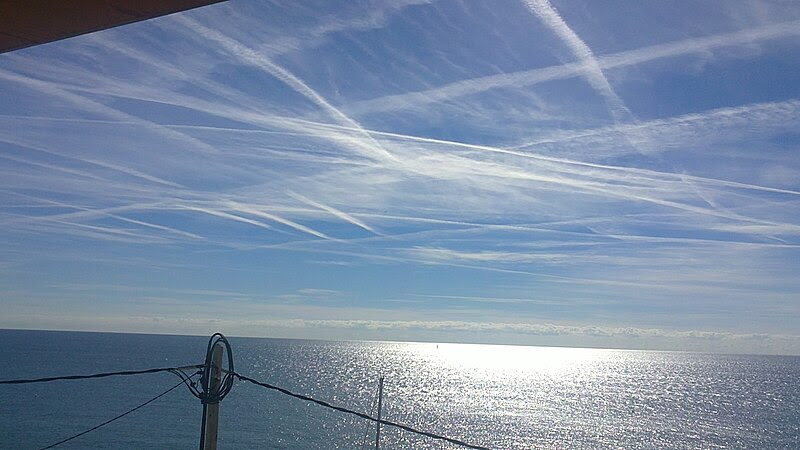 When people believe in Chemtrails or a fake moon landing, we all suffer as a consequence.

Another beautiful day on retirement island.  We load up the buggy and go to the pavilion, light a charcoal fire and grill hamburgers.  The air is warm - 72 degrees, and the sky is bright blue, with contrails from jets overhead.

I mention to Mark that some young people today think these are "chemtrails" that the government is using to spray us with chemicals.   Mark says, "I hate that shit, don't bother me with it.  Who believes that crap?"

He assumes, wrongly, that because he doesn't read about this trend online and isn't sucked into it, it doesn't affect him at all.   But it does.

Of course, you have to ask yourself, who came up with this shit to begin with?   It is another aspect of our Cargo Cult mentality - some bored teen stoned on pot who made it up?   Or Russian troll farms trying to sow dissent and distrust of the government?   Obviously, this sort of nonsense works in their favor.

Or is it just some fat computer turd on 4-chan who wants to start an internet rumor and see how many people will believe it, just to make his sad, lonely life seem more relevant?   That is also possible.

The upshot is, though, that all of these urban legends do degrade our society in that they create a feeling of paranoia and depression in the populace.   If people grow up believing in conspiracy theories, they are not people who will be there to defend our country when it needs help.   In fact, they will be the ones actively trying to tear it down.

Fake news isn't funny or stupid.   It has a purpose - an evil purpose - to destroy.   Whether unintentional or designed by foreign powers, it makes no difference.   When people believe in irrational things, bad things can happen, as the last election illustrates.

I guess to me, what is sad is that there are people out there today dumb enough not to know what "dew point" is, or how condensation works.   Kids who never saw "12 O'Clock High" and realize that aircraft engines produce moisture in the combustion process - and that moisture in a sub-zero environment will condense into vapor trails.   And that this has been going on since aircraft first flew high enough to do so. 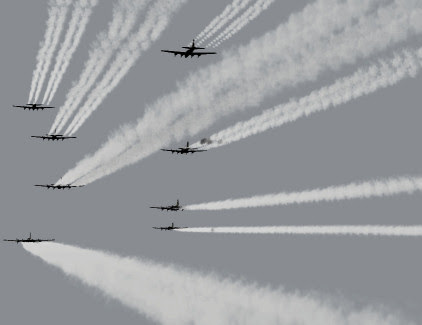 B-17's over Germany, leaving vapor trails.   These trails were like a giant arrow, pointing out aircraft to German anti-aircraft gunners and fighter pilots.  Sadly, they are an inevitable consequence of burning fossil fuels at high altitudes and cannot be turned on and off at will.

And while you might not believe in urban legends, chances are, you believe in similar idiotic things - we all do, you know.

Again, one reason people believe in urban legends is they are ignorant, and want to feel smarter and superior to people who are actually smarter and superior than us.  As I noted before, you can feel smarter than a rocket scientist, if you posit that rocket scientists don't exist and the moon landing was faked - or that rocket science was merely stolen alien technology (in which case, aliens have pretty primitive technology!).

In the financial sector, many people believe in similar types of legends.   They don't understand how the stock market works, so they say, "It's all rigged!" and then instead of investing, buy a new motorcycle.  They are using their urban legend as an excuse to justify poor financial behavior.

Or Joe Blow who can't get ahead at work, just gives up and says, "all corporations are evil and run by the Illuminati!"   It isn't his fault he is dumb, drunk, and shows up late for work.  It is all a conspiracy of those in-the-know and he will never be them, so he might as well not try.

You see how this works - weak thinking.   You come up with excuses in life for not trying, because it is convenient thinking.

Why bother learning all that "science stuff" when you read about chemtrails on the Internet?   Doctors don't know anything about medicine - I saw a documentary on YouTube about how vaccines cause Autism!  I can be the "smart Mom" now - who cares enough about her kids to let them get Polio!

Or take the survivalist or paranoid conspiracy theorist.   Are any of these people happy, successful, or wealthy?  Of course not! The Illuminati keep them down!   Well, that's their weak-thinking excuse anyway - an excuse that allows them to avoid examining their own lives and actions too closely.

Sure, you could argue these folks are nuts and are only harming themselves.  But when enough people just give up on life and start believing whatever is convenient to them, our society will inevitably fall apart.

When people believe they can vote themselves a raise, Democracy fails.

We need to shout down these urban legends and debunk conspiracy theories and let these folks, know, in no uncertain terms they are being idiots.   It is easier to just walk away and not say anything when someone blathers on about some conspiracy or urban legend.   But you are doing society a favor when you say, "That's a ton of bullshit and here's why...."

And if that doesn't work, just say, "I'm really sorry, but I don't hang with morons."

Because when you tolerate this sort of shit in your life, you enable it.  When you give it the mantle of "difference of opinion" you validate that it is in fact a valid workable opinion.   And that means you acquiesce to this nonsense, out of fear of making a scene or pissing someone off.

Walk away from nut-jobs.   If you can't change their mind, they will just drag you down.