When did Comics go from low art to mainstream culture?


As a kid growing up in the 1960's, we loved to read comic books - but not at home.   The only time I really had the opportunity to read comics was at the barber shop, where they had a huge box of comic books we could paw through while waiting our turn to get our hair cut.   We had Batman, Superman, and weird comics like Little Lulu and Richie Rich.  Oh, and Archie comics, before he found Jesus.  The idea of comics being aimed at anything but a kiddie audience was just absurd.

Maybe that changed with Stan Lee and Spiderman, which had more of a dark edge to it.   Or maybe our generation  just chose to never grow up.   As I have noted time and time again, our generation - and the subsequent ones, have seemed to revert to childhood - we have been infantilized so to speak.

Of course, my Mother, being somewhat of a cultural elitist (back when that was considered laudable) refused to allow us to have comic books in the house.  The only books we did have were hard-bound copies of Asterix and Tin-Tin, in French, of course.  But Mother would not permit those "trashy" comic books in the house - and many Mothers felt the same way.   For a time in the 1950's it was felt that comic books were bad for children and lead to juvenile delinquency - hence the self-censoring Comics Code Authority was created, similar to the Motion Picture Production Code which self-censored movies.

Of course, this just made comic books that much more appealing to kids, like a stolen cigarette or a black cat firecracker - things boys would hoard in a cigarbox under their bed in that Spanky and Our Gang kind of era.   And that is why you see the trope - even today - of kids reading comic books under the covers with flashlights during a "sleep over" - it was an illicit activity.

But over the years, comic books went from kiddie fare to mainstream.   Perhaps it started with the original Christopher Reeves Superman movie, which was a huge box-office hit.   Hollywood, always looking for a sure thing, started digging into these old comic books for story ideas.   The rest, as they say, is history.

To a young person growing up in the last decade or two, the idea of superhero movies must seem like part of the landscape.   Granted, we had the Superman television show in the 1950's and the campy Batman show in the 1960's  (There is, and always will be, only one Batman in the universe, and his name is Adam West).  And yes, we had Saturday morning cartoons, like Batman, Superman, and Dick Tracy - all taken from comic books or the daily paper funny pages, or both.

But there were few, if any, superhero movies (the cheaply made Batman release of the 1960's notwithstanding - an extended version of the TV show designed to cash in on the craze).   Certainly, there were no series of them or franchises as we now call them.   They did not make up the majority of titles you see at the multiplex these days.  Hell, there was no such thing as a multiplex back then!

Like I said before, the maturing of comic books may be also traced to Stan Lee and Spiderman, who was a character less cartoonish than his forebears.   And over time, other comics started to follow suit - Batman went dark and became "the Dark Knight" and a whole host of new superheros were created.   People started drawing more serious comics called "Graphic Novels" and Japanese comics started making their way across the Pacific - including explicit Japanese comic-book porn (which yes, men would read on the subway in Japan, in plain view of everyone, I saw it myself!  You could buy them in vending machines, like everything else in Japan).

Comic books became big business and people became big fans.   Folks would dress up in character costumes, which they called "Cosplay" for some reason.   And the line between comics, movies, video games, and other media forms started to blur.   Movies became more cartoonish and cartoons became more like serious movies.  Throw in CGI and movies like Avatar and the line between high and low art is increasingly becoming blurred.  Spiderman went on Broadway, with mixed results.  No word on a comic book character-based Opera, but I am sure there is one out there somewhere.

Of course, conventions were the next thing, started perhaps by Comi-con and then spreading like wildfire across the nation.    We even have one here on our little island, and it was well attended!  These events have morphed, much like SXSW has morphed,  into more than mere comic book conventions, but fan clubs for movies, videos, video games, and even technology.   They are the Woodstock of the current generation, albeit with working flush toilets.

Lately, however, there are signs that the comic book trend may be tapering off, or at least saturated.  Many are starting to note that there are perhaps too many "Comicons" out there and attendance is starting to drop off while costs continue to escalate.  One convention recently made news by revising its volunteer procedures.  It seems some people "volunteered" just to get free admission, while not actually doing any volunteer work.  We saw this at an antique car show we used to volunteer for.  Mark and I worked like dogs while others merely showed up and walked around and looked at cars.   Eventually, these things have to be reined in, otherwise everyone attending the event is a "volunteer" and no one is paying to get in.

Perhaps America's fascination with comic book heroes or "graphic novels" is starting to plateau.  Maybe.  Maybe not.   It seems like a lot of the superhero movies are starting to fall flat - selling the same story and special effects over and over again.   You've seen one explosion movie, you've seen them all.   Why bother going to the latest one?

I doubt the trend will disappear entirely, but it may plateau and the taper off, particularly as people get older.   We all know the story, back in the day, of the boy who goes off to college and leaving his baseball card and comic book collection behind.   After graduation, he realizes these are "collector's items" (including his coveted Superman #1!) but while he was away, Mom "cleaned out his room" and threw all that stuff in the trash - including his Jackie Robinson Rookie card!

But we move on in life, and what seems fascinating to a 15-year-old, or even a 20-year-old looks pretty juvenile to a 35-year-old.   Whipping out your latest issue of Spiderman while having lunch with the Partnership isn't going to make many points with your bosses, unless of course, you work for an entertainment law firm. 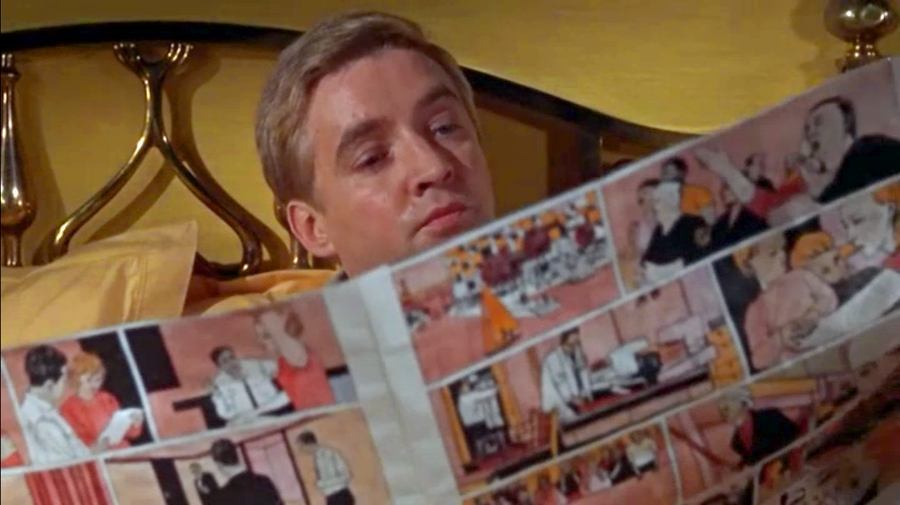 In a dark, dystopian future, we will all read comic books - according to Ray Bradbury

The only disturbing thing I find about comic books is that they remind me of that scene from Fahrenheit 451, where Montag is "reading" the newspaper - which is a comic book without captions.  In this scary future, books will be banned, and reading will be illegal, and the only printed material will be comic books.

And in a weird twist of irony, the book and movie have been re-imagined as - you guessed it - a comic book.   To quote from both the original text and the comic book:

"Books, so the damned snobbish critics said, were dishwater. No wonder books stopped selling, the critics said. But the public, knowing what it wanted, spinning happily, let the comic books survive. And the three-dimensional sex magazines, of course. There you have it. It didn't come from the government down. There was no dictum, no declaration, no censorship, to start with, no! Technology, mass exploitation, minority pressure, carried the trick."

Like so many scary things predicted when I was a youth, it seems like yet another thing that has, alas, come true.   Literature is dead!  Long live the comic book - er, graphic novel, I mean!
Newer Post Older Post Home