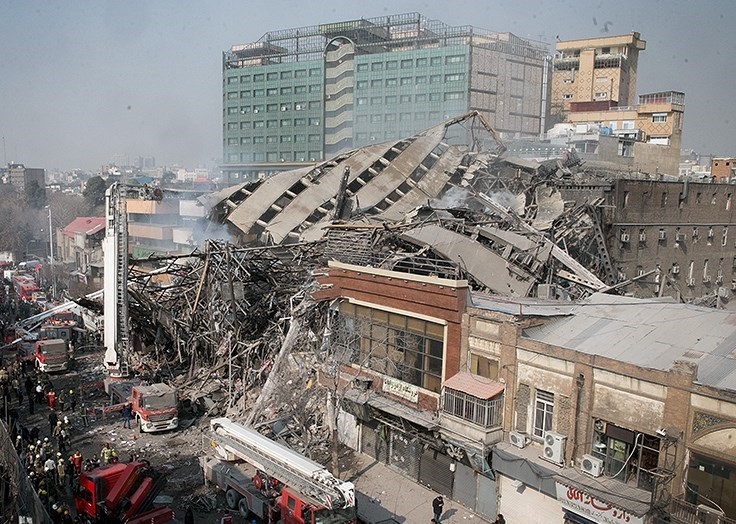 The media reported that the Plasco building collapsed in Tehran the other day.  Sadly, they didn't bother to report the full story.


In a eerie parallel to the 9/11 attacks and collapse of the World Trade Center, a high-rise building in Tehran - in fact, the first high-rise building in Tehran - collapsed after catching fire the other day.   Take that, 9/11 Truthers!   Fire can't melt steel, but it can anneal it and make it soft and bend.   I worked in a metallurgical lab and you didn't.  Now shut up.

But again, that illustrates the idiocy of the "media" today who will breathlessly report 9/11 "truther controversy" without any critical analysis simply because they just don't have any real background other than going to journalism school.   They are as clueless as the conspiracy theorists they report on.

Anyway, I read this story in the New York Times, NPR, and even the BBC and none of them said much other than a bunch of people died.   But I was curious, The Plasco Building?  That didn't sound like an Arabic name.  In fact, it smacked of 1960's industrial optimism.

So I clicked the link above and my suspicions were correct - and the backstory was fascinating and horrifying.  The building was constructed by Habib Elghanian, an Iranian Jew - back when there was such a thing as an Iranian Jew.  He was one of the few people trying to modernize Iran by putting up buildings like this, and starting a company called Plasco, which made, as you might guess, Plastics.

Plastics was a big deal in the 1960's and yes, even today.  Sadly, after the "revolution" of 1979, the Iranians summarily executed Mr. Elghanian for being a Jew and they confiscated his company and his building.   Lovely folks, those Iranians.

Anyway, it is a story worth reading and remembering as we try to re-open ties with Iran.   These can be very nasty people, willing to kill someone just for their religion.

Of course, the story has a horrific backstory as well - the entire reign of the "Shah" and his nonsense - a man so paranoid that he basically caused the Iranian "revolution" to occur.

Maybe they should have a training course for these dictators, as they seem to follow a predictable pattern - they try to crush any opposition or dissent so harshly that they end up on a spider hole or shot in a drain pipe eventually.  And I wonder whether this will eventually happen to the current regime in Iran, once people get tired of religious dictatorship.

Anyway, it struck me as a fascinating story - a story the media forgot to tell or chose not to tell for some reason.  Even the right-wing media missed this backstory.
Newer Post Older Post Home