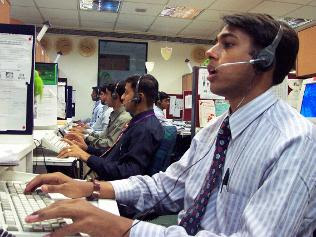 When somene calls you saying you have a problem with your computer, hang up.

Lately, I have been getting dozens of phone calls from various area codes, where the caller hangs up as soon as I answer.   I answer the phone "Bob Bell" and not "Hello" so I think their phone system doesn't recognize "hello" and hangs up, or they think they reached a business and hang up.

When I google the phone numbers, I find other people have gotten these calls as well.  Some are hang ups, but others get an Indian-sounding guy on the line claiming to be from Microsoft and that they have "detected a problem with your computer".

These phone numbers, of course, are just entry points in the grid, from VoIP connections (Voice over Internet Protocol) from India.   They set up a line and start dialing - hundreds of people in a boiler room calling thousands of numbers.   Since long-distance is free, the cost of the phone calls is nil.

These are a scam of the worst sort.   They get ignorant people to download a virus to their computer which allows them to control the computer.   The "technician" then encrypts the hard drive and then tells you that you have to pay a ransom to have it unencrypted.

Or, they tell you your computer has a virus problem, but for a fee, they will fix it.   Of course, the problem with your computer is the program you unwittingly downloaded from their website.

In other cases, they simply say you have a problem - which you don't - and ask for money to fix the problem, which they don't do, because you never had such a problem to begin with.

Many of these latter folks may never even realize they have been scammed.   After all, they gave the nice man their credit card number and he fixed their computer!

Sadly, the folks who need to read this blog entry are the ones least likely to read it.   These are folks who actually believe that Microsoft is monitoring their computer and can fix it over the phone.   They have no understanding how computers or the Internet works - the are primitives in a cargo cult.   And they will get fleeced no matter what.

Ignorance is an expensive hobby!  Gullibility is even more expensive.

Knowledge and skepticism, on the other hand, are profit-making traits.  Sad that more people don't invest in those things.

So long as people keep falling for these scams, people will keep doing them.   In many parts of the world, making even a few dollars a day is considered a good income.  So if you have to call several hundred people to make even one score, it is worthwhile.   Maybe you'll make enough money to save up for a three-wheeled car!   And from their perspective, we are impossibly rich and spoiled (and they are arguably right about that) and certainly won't miss a few dollars here and there - or a few hundred.

We live in a smaller world today.  You can gird the planet in less than a day by airplane.   Long-distance is free, with VoIP lines.  People from far across the planet can interact with you in real-time.   This was not the case not long ago.

The interesting thing is, these folks are very smart.  They figure out early on, who is a "mark" and who to hang up on.   They want unsophisticated, older, dumber people.   So they hang up the moment you voice suspicion, or if it seems like they called a business phone number - hence why they hang up on me.

And in this modern world, they likely will never go away, until phone calls themselves die out.   Already today, most people text or message - even e-mails mark you as a geezer.   No one actually talks to anyone.   And certainly young people never take a call from someone they don't know already.

So ironically, just by answering the phone, you passed the first level of filtration - you are a geezer by definition, as only geezers actually answer their phones anymore.   If they can keep you on the line for more than 30 seconds, they know they have a sucker.  As soon as you say anything contrary, they hang up.

And no, we can't track down or prosecute these people.   Yes, a few of the IRS scammers were shut down in India a few months back.   When interviewed, some of these call-center people marveled at how paranoid Americans were about the IRS - their own government.  In India, tax evasion is a national sport, which is why they recently changed the currency there, to get people to declare their stashes of ill-gotten un-taxed cash.   If you called someone in India and said you were from the tax authorities, they would likely say, "fuck you, come and get me!" and slam down the phone.

Maybe the solution isn't to go after call centers in India, but to change attitudes here in America.   People need to shed this irrational fear of the IRS - and irrational fears of their own computers!
Newer Post Older Post Home