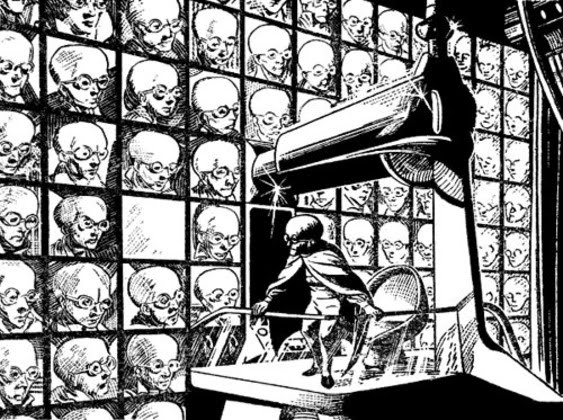 Can one man end up owning the world for an investment of one dollar?

In the Science Fiction story, John Jones' Dollar, the author tells a tale of a Mr. John Jones, a socialist, who deposits a dollar in a savings account in a Chicago bank, on the proviso that his 40th descendant should receive the proceeds of the account.  It is an interesting story about how compound interest works - even showing the formula in the text of the story!

Over the decades and even Centuries, as people live longer and longer lives, that invested dollar keeps increasing in value, until in the year 3221 AD, the sum in his account is worth more than all the wealth on Earth, or indeed, by that point, in the entire solar system.

Fortunately, the world is saved, as the 39th generation John Jones decides to divorce and dies childless, and the money reverts to the government, ushering in an era of actual socialism that the first John Jones pined for.

It is one of those humorous SciFi short stories that illustrates a point - compound interest is your friend.   But aside from that, this quote from the year 3221 describing banking in the "old days", really jumped out at me:

"A great many individuals, however, deposited their Dollars in a stronghold called a bank. These banks invested the Dollars in loans and commercial enterprises, with the result that, every time the earth traversed the solar ecliptic, the banks compelled each borrower to repay, or to acknowledge as due, the original loan, plus six one-hundredths of that loan. And to the depositor, the banks paid three one-hundredths of the deposited Dollars for the use of the disks. This was known as three percent, or bank interest."

What struck me about this quote - written in the 1950's 1915 - was that the author blithely assumed that interest rates were largely fixed for his era.   Banks loaned money at 6% and paid interest at 3% and kept the difference and all was well with the world.   In a stable economic model like this, people can predict outcomes, five, ten, or twenty years down the road.

In the 1950's 1915 when this was written, it must have been comforting to think that interest rates were carved in stone.   When life is predictable, you can make plans - and predictions.

By the time I was an adult, things had changed.  Interest rates were in the double-digits for borrowers, and inflation and unemployment were as well.   It was a bad time, compared to even 2008, but a funny thing, I was employed all during that dark era.  10% may have been unemployed, but 90% were.

Today, we are in an opposite position.   Interest rates offered to savers are fractional and we are lucky to make 3% on our stock investments.   Mortgage rates, while rising, are still below 6%.   But oddly enough, credit card rates that some call "low" are 13% or more.

Hopefully, we will gravitate back toward an era of stability and predictability - perhaps what the "Make America Great Again" people want, but are not likely to get.

Sadly, it seems that dramatic changes in government policies, tax rates, and banking regulations, will be the norm in successive administrations, as each party tries to implement its own agenda of radical overhauls and undo the previous party's work  - convinced the other party of course, is wrong in every respect.

What we need in our economy is not radical change, but consistency and uniformity and predictability.  When the marketplace is predictable and consistent, it is also stable and prosperous.

But then again, there are some who profit from instability and unpredictability - and maybe that's why "bank interest" is no longer a fixed 3% and likely won't be for some time.

UPDATE:  While this story carries a publication date of 1956, one commentator claims it was actually first published in 1915, when indeed life was more predictable.  Good Science Fiction, of course, should be timeless, as this story is.
Newer Post Older Post Home