When Do You Replace Your Tires? 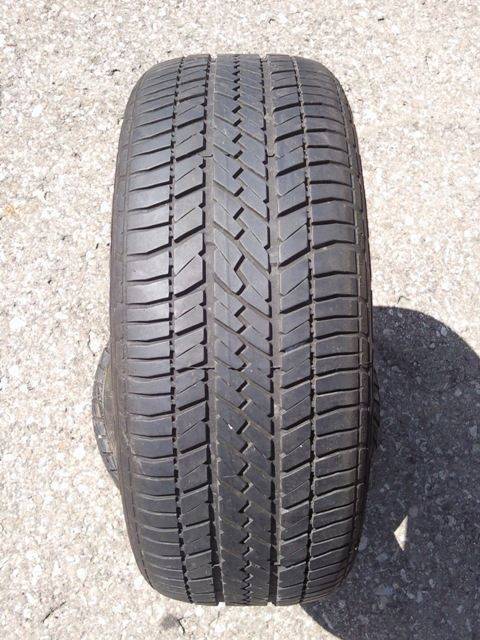 When should you replace a set of tires?  Before they are worn out!


You really don't realize how worn out your tires are until you get a new set and compare the tread on a new set to the old set.   It is tempting, when looking at your old tires, to look at the "wear bars" and think, "well, it isn't to the wear bars yet, so I must still be good!"

But as tires wear and age, a lot of weird things happen:

1.  Thinner tires are easier to puncture, as it is easier for a nail or road debris to get through the tread.

2.  Thinner tires are not going to provide good traction, braking, steering, particularly in wet or inclement weather.  This is particularly true if you are using all-season radials in snow country.

3.  As tires wear, they can tend to "feather" as the blocks of tread wear on one edge (e.g., leading edge) and not another.  This can cause the tires to get noisy over time, even if you rotate them often.

4.  As tires age, the tread gets harder and harder, which makes the remaining tread last an astonishingly long time, but at the same time, providing even less traction, braking, and steering abilities.

5.  Tires can dry-rot after about five years or so, and crack and even blow out.

6.  Older tires can develop "flat spots" and lose their flexibility, resulting in shimmying, particularly when braking.

It is tempting to be "stingy" and try to get every last mile out of your tires, but it may be a false economy.  This blog is not about how to recycle pocket lint to save money.   I have found most "money saving" blogs to be about that sort of nonsense - and it ends up costing people more in the long run to be pointlessly stingy to the point of spending more money to be stingy.

And yes, wrecking your car and ending up in the hospital are certainly things more expensive than a new set of tires!

And I am serious about this.   In any automobile, the most important part of the suspension and braking system is the tires.   People fail to "get" this, thinking the suspension is the springs and shocks and the brakes are the pads and rotors.   That is true enough, but a large portion of shock absorption is in your tires.  And the best brakes in the world can't stop a car with bald or balding tires, particularly in the rain.

Your tires are also the prime component in your steering system.   Yes, you need a steering wheel, a rack-and-pinion, tie rod ends, ball joints and whatnot to steer the wheels.  But again, it is all for naught if the tires are not making contact with the road.

Tires are arguably the most important single safety element in your car.

Not only is it a safety issue, but an economic one.  I spent countless hours and dollars trying to track down a "wheel shimmy" problem on one of my E36's, only to discover (after replacing many suspension components) that it was old dry-rotted Michelins that were as hard as the tires on Fred Flintstone's car.   I didn't want to toss them out, because they "still had good tread on them".

I was being an idiot - like the old men who spend fruitless hours chasing down electrical demons saying, "It can't be the battery!" over and over again - negating the one obvious solution that would solve their problem for good.   I learned something important from that lesson - don't be cheap about tires, it could be costly in more ways than one.

The tires in the photo above are pretty well shot.  They are Michelins, and were good tires at one time.  They look like they have a lot of tread left but in reality, they are maybe 2/32" above the wear bars - the point where the tires should be thrown out.  And since the previous owner left them stored in a basement for several years (after several years of service on his car) they are pretty much dry rotted and no good.   I learned the hard way that used tires are no real bargain.

While the minimum legal tire tread may be as little as 2/32", you really should think about replacing your tires long before this.   We used to use a "Lincoln Penny" to check tire tread depth in cars.  It was a bad idea, as if you couldn't see the top of Lincoln's head, it didn't mean you had "good tires" necessarily, but maybe only barely legal ones.  Some folks recommend replacing tires when they reach 4/32" tread depth.

By the way, when measuring tread depth, check all the way across the tire. I once thought a set of tires was "good" by measuring the tread depth at the outside of the tire, not realizing they were worn to the cords on the inside.   Ah, good old BMWs and their negative camber.  I really don't miss that much!

Thus, if our tires are at 6/32" they may not need replacing, but they are a lot closer to the end than the number would suggest.   Bear in mind these are more than halfway worn out, in fact they are 2/3rds the way to being shot.

This simple diagram illustrates the  principal.  As you can see, 6/32 or 5/32 sounds like a lot of rubber, until you see it is nearly at the "Replace" stage.

So how long should tires last?   To be sure, tires, like mufflers, batteries, and so many other automotive components last far longer than in the past.   In the old days, you could buy a 24 month battery, or a 36 month battery or even a "die hard" 60 month battery.  Can you guess how many months they lasted?

Today, batteries can last eight years or more (although this is not guaranteed, of course!) and the old days of the "24 month" battery are long gone.   Similarly, aluminized and stainless steel exhaust systems can last the life of the car - which is a good thing, as they can be staggeringly expensive to replace.

The "good old days" really sucked, and the next time someone says, "they don't make cars like they used to," reply, "Thank God for that!"   The "Good Old Days" were not that good - or great.

The tires I presently have seem to use up 1/32 of tread every 8,000 to 10,000 miles, which means theoretically, I could get another 8,000 to 10,000 miles out of my existing set of tires.   Rather than push things to the limit, though, I am going to replace them now.  We spend the summer on the road, towing a trailer in all conditions, and we really don't need to risk hydroplaning.

Maybe someone at the tire shop can put the old ones on his truck for a year.  He can be my guest.