Why Do We Have Self-Destrucive Habits? 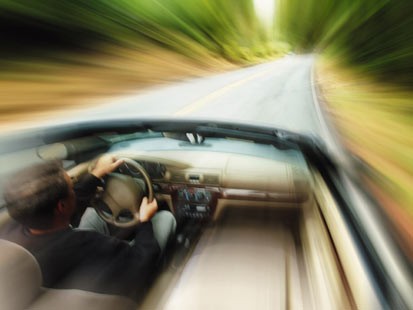 People speed and tailgate, even though they know it doesn't get them anywhere faster and yet could cause an accident or result in a ticket.  Why?

Economists love to use theoretical models about rational markets to describe economic behavior.  The "invisible hand" of the marketplace will fix everything up in a jiffy, so long as we don't tie it down with burdensome regulations!  In these hypothetical models, we all are rational actors, seeking out the best bargains at the lowest prices, while the people we do business with charge the highest prices the market will bear, in a system that operates with 100% efficiency.

Nice fantasy, anyway.   The world doesn't work like that.

The biggest problem is not that only do we act irrationally in this world, but we often act in a manner diametrically opposed to our best interests.  I recall seeing a television show about how building designers model fire exits for emergencies.   According to their computer models, the fire exits should be sufficient for everyone to evacuate in an emergency.

And in exercises where the "occupants" of the building are firefighters and other volunteers, the building evacuates in an orderly manner as predicted by the computer models.   Sadly, in real emergencies, though, it can take 2-3 times as long to evacuate the building, which left designers puzzled as to why.  After all, a burning building should be an incentive for people to evacuate even faster, right?

As it turns out, we are irrational, at least some of the time.   When the computer models were modified to show at least a portion of the evacuees going in the wrong direction or even running around in circles pointlessly, the models matched human behavior exactly.

In the real world, people run back into burning buildings to get their smart phone.  No, really, they do it.  People will ignore instructions of flight attendants and try to take their carry-on bags with them, when exiting a crashed airplane that is on fire and ready to explode.   People do dumb things.  People do stupid things.  People do self-destructive things.

And we all do it, too - at least some time in our lives.

For example, take automobiles.   Every year 35,000 people are killed in auto accidents - down about 10,000 thanks to airbags and seat belts and safer cars.  About half of these are drunk drivers.  Others are inattentive drivers - people who text while driving, for example, even after they've been warned it is unsafe.

But a lot of people, in fact it seems like about half, do really dumb things on a daily basis, which often account for these other accidents.   Speeding, for example, is really pointless.  It gets you nowhere faster than you'd get doing the speed of traffic, and if you get a ticket or worse yet, into a wreck, it can jack your insurance rates through the roof.   Or it could kill you.

Tailgating is even worse.   In theory, at least, speeding could shave a few minutes off your trip (in reality, it often doesn't, due to stop lights and whatnot - and the time saved is often trivial).   But tailgating?   It serves no purpose whatsoever, other than to cause a wreck or start a road-rage incident.   When you tailgate someone, the person you tailgate never speeds up as a result.   So even its intended effect - to get you where you are going - never works.   The only thing you are doing is risking a wreck where you will always be found at fault, even if the other guy locks on his brakes to intentionally cause a wreck (he can always say he was trying to avoid running over a squirrel, and you can't prove otherwise!).

The list of self-destructive behaviors goes on and on.  Each time you take a drink, or light a cigarette, or eat that plate of nachos, you act against your own best interests, of course, but at least those activities provide some transitory pleasure.   But in other instances, we are self-destructive for no really good reason.

Why is this, and why does it matter?

The first question is harder to answer, only to say that we are irrational beings that do irrational things - consistently and repeatedly.   We are emotional beings and have complex psychologies with all sorts of weird needs.

It is funny, but the media loves to report on "AI" or "Artificial Intelligence" as if it were right around the corner, coming soon to a robot near you.  We are told that Bill Gates and Stephen Hawking are alarmed that AI will take over the world.   But frankly, I think it is a bit of hubris on the part of mankind to think that our incredibly primitive computers - and they are incredibly primitive compared to the human mind - will ever reach a level of "consciousness."   If they are, they will need to program them with an array of neurosis to make them intelligent.

In other words, our irrationality seems to be a part of who we are.

And in a way, this is why our society does need some regulation and rules in place to prevent irrational behavior from dominating society.   Rules preventing predatory lending shouldn't be needed in a rational world - rational people would not sign onerous loan documents in the first place.   But people are irrational.  They want that shiny used Camaro in the parking lot near the military base - and will pay over-book value for  it on a 20% interest loan.

The problem we are facing today is that irrational behavior is now the norm - and lauded.   We are told that Casinos - once viewed as an obscenity in America - are "job creators" and something every community should strive for.  The reality is, of course, that they don't create much in the way of jobs, and just rearrange wealth, not create it.   And the long-term economic misery they produce is profound.

So the idea that the government - or society - is going to protect us from our own folly seems further and further removed.  We want to be Libertarians and do as we please - smoke dope and cigarettes and eat until we explode - without some nagging First Lady to say otherwise!

Libertarianism, however, is a double-edged sword.  When a society devolves into "I've got mine jack, you get yours" bad things pile up in a real hurry.

Sadly, things are not about to change anytime soon.  And I am not sure radical change, Sanders-style, would even be a good thing - replacing one bad idea with an even worse one.

The good news is, if you can act rationally, at least most of the time, you can do very well in our society, which pines for rational actors.   Look in the help-wanted section of the paper (or online job listings).   There are jobs galore listed for people who have skills or worthwhile degrees.  People with a clean license or who can pass a urine test.  You can distill all the job requirements down to one simple characteristic:  Rational actors wanted.