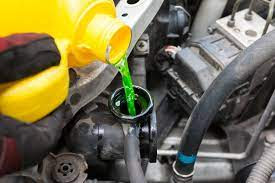 Changing the coolant in your radiator isn't as simple as it used to be.
In a previous posting, I discussed fluid changes for  cars.  One that bears special mention is radiator coolant changes.  Whether you do this yourself or have it done, you need to understand radiator coolant, as it is far more complex than back in the days of green Prestone.
In the 1960's, most cars had very simple cooling systems.  The radiator, made of brass, was filled with a mixture of tap water and Prestone, and a simple cast-iron water pump circulated the coolant through the engine block - with a simple mechanical thermostat opening and closing the passage at the top of the engine to regulate flow.
By the way, did you ever wonder how those old-style thermostats worked?  They have a small "pill" usually of copper, with a type of wax inside.   As the temperature increases, the wax expands, pushing out a lever on one end of the "pill" which in turn opens the thermostat.   I spend a month testing these at Carrier in a failed experiment to use them as HVAC actuators.  I love my job.
Of course, when you heat most fluids, they expand, and the old brass radiators were pressurized, with the pressure being regulated by the radiator "cap" which was spring loaded.  If the pressure increased beyond the rating of the cap (usually around 14 psi, as I recall) the cap would release and allow coolant to discharge, through a small hose, onto the ground.
Emissions laws dictated that "coolant recovery bottles" be used to catch this overflow. Yes, spilled ethylene glycol is a pollutant - and a toxic one.   It tastes sweet and dogs have been known to drink it - usually with fatal consequences.   So if you spill coolant, be sure to wipe it up, quickly.
These early coolant overflow bottles were primitive - really just a bottle to catch the extra coolant.   But by changing the design of the radiator cap, they allowed for the coolant to expand (into the bottle) and then be sucked back into radiator when it cooled.   So in addition to eliminating spillage, they saved money, as they saved that fluid and put it back into radiator - so there was no need to "top off" the radiator over time.
These systems kept oxygen out of the cooling system as well, which was important in reducing corrosion in the engine and radiator.
Now at the time, most people never - or rarely - flushed their radiators and engine blocks of coolants.  A few hardy souls might buy a "Prestone Flush Kit" which actually had an attachment for a garden hose to splice into one of the heater hoses.   But to most folks - particularly older folks - they took the concept of "Permanent Anti-Freeze" literally.  And back then, cars rarely lasted more than eight years or 80,000 miles, anyway.
Ethylene Glycol, commercially sold as Prestone, was a big improvement over the old-style anti-freeze, which was alcohol.  Alcohol-based anti-freezes had to be replaced annually as they boiled off during the summer months.  Ethylene Glycol had the additional advantage of having a higher boiling point, so it made a better coolant as well as merely being anti-freeze.
And yes, in the old, old days, coolant was basically water, period.  And in many places in the South, people used plain water alone.
But getting back to our story, about the same time as emissions laws required coolant overflow bottles, car engines and radiators changed. Aluminum block engines became more popular, and radiators switched from heavy and expensive soldered brass to lightweight aluminum with plastic headers.  And often this meant that new types of coolants would be needed that would be compatible with these new types of materials.  And many manufactures recommend using distilled water in the cooling system to prevent electrolytic reactions between dissimilar metals.  It sounds stupid, but at 99 cents a gallon, distilled water is cheap.
Cooling system design changed as well.  The old-school cooling system, where the water pump would "dead head" against a closed thermostat, gave way to a new system, where the thermostat would force the fluid to bypass the radiator rather than merely block it off.  This resulted in more even engine cooling and faster warm-ups, as well as more consistent engine temperatures.
And thermostats have evolved to include electronic controls and of course are no longer the simple, 99-cent deals you got at a gas station, but rather complex assemblies that cost fifty dollars - and are made of plastic.
And many of these systems got rid of the "coolant overflow bottle" in favor of an all-pressurized system.  The radiator cap disappeared, replaced by a coolant bottle cap in a pressurized coolant bottle, hanging off the side of the radiator.   It is a markedly different system than the days of old, and one prone to difficulty, if you approach it with the "old school" mentality.
One reason for these changes is that in many modern cars, the radiator is mounted lower than the engine in an effort to bring down hood height.   Old-fashioned cars had high radiators, as they wanted to insure that any air bubbles would rise to the top of the radiator, rather than fester in the engine block (and some of the very early cars had no water pumps at all, instead relying on thermosiphon cooling to circulate water through the engine).
As a result, if you change your own coolant, you can easily end up overheating your engine and destroying it.   How?   Here's how.

Joe Handyman decides to flush his own coolant, to save money.   He remembers do this on his 1985 Caprice, so how hard can it be?   He opens the hood, and takes off what he thinks is the "radiator cap" but actually is the coolant bottle cap.  His car has no radiator cap.
He finds the drain screw at the bottom of the radiator, after searching in vain for a "petcock" like on his old Chevy.   These modern cars!  No petcocks!    So he takes out the screw and drains the fluid.   About eight quarts come out.
After the car stops draining, he replaces the drain screw and then pours new coolant in, using Prestone from the auto parts store, and tap water.  For some reason, though, it only takes less than a gallon of coolant mixture.
Convinced he is finished, he replaces the "radiator cap" and drives off.   Five miles later, he fails to notice the temperature gauge is in the red.  When he finally notices, he decides to turn around and head home. The car isn't "steaming" like in the movies, so he figures the gauge must be broken.  When he arrives home, the car stutters to a halt and won't restart.   What the heck?
What happened to Joe?  Joe just blew up an engine.  How?  Well, when he drained the radiator, he drained most (but not all) the coolant from the engine.   He failed to unplug the block drains to get it all, but that is the least of his sins.   When he replaced the coolant, he didn't realize that all he was doing was refilling the coolant bottle, not the radiator and engine block.   Since the bottle is lower than the head, he created a huge air bubble in the cooling passages of the cylinder head.
As the car overheated, he ignored the signs and warped the head.  He kept driving, and destroyed the engine.

How can you prevent this from happening?  Read the manual - the service manual - that you should buy before attempting such maintenance.   And don't take your car to mechanics who don't understand such cooling systems.   Your local garage that works on pickup trucks might not understand about bleeding the head - most of the cars they work on have the top of the radiator located higher than the engine.
Usually, in modern systems, where the head is higher than the radiator top, there is a bleed screw, in the cylinder head or on the radiator, to allow air to escape. Once the car is filled with new coolant (removing the upper radiator hose and filling through there is one way to get more coolant in), start the engine and let it warm up.  Open the bleed screw and let the air escape - and keep a sharp eye on the temperature gauge, to make sure the car doesn't overhead.  Shut down the car and let it cool off.
Repeat.  Several times if necessary.  And have spare coolant available to top up the coolant bottle.  As the air is bled, the coolant level will drop.
Read the manual for your car - flushing coolant is not as simple as tossing in a gallon of whatever you bought at Pep Boys.
UPDATE:  It goes without saying that unnecessary coolant changes are a total waste of money.  Modern cars don't need them as much in the past - maybe every 50,000 or even 100,000 miles, if that!
Newer Post Older Post Home