Should You Declare Bankruptcy? 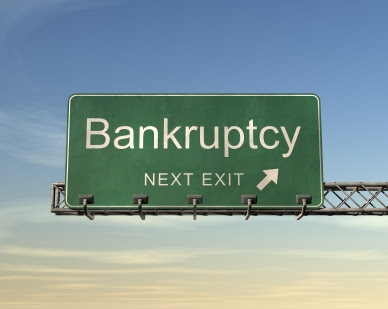 Bankruptcy is not something to be taken lightly.  But then again, when the plane is crashing, sometimes the best thing to do is to jump out and pull the ripcord.  Forget saving the plane! Save your ass!


Should you declare bankruptcy?  It is a hard question to parse, as there are so many variables to factor in.

The other day, I met a young man who should at least consider the prospect - and yet, he put it out of his mind as a non-starter.

Steve is 32 years old, and works for a national bank.   He used to work for a mortgage company, until it was acquired by the bank.   Back in 2005-2007, he was making a six-figure salary, originating loans that are now blowing up like so many microwaved soda bottles.   But as he put it, back then, they all thought these were good deals - after all, housing prices could go nowhere but up, right?

Which brings us to an incidental first point:  Some of the people hurt worst in the housing downturn were people "in the business" who you would think would know better.   But mortgage brokers, real estate agents, appraisers, home inspectors, bankers, and others were among the rabid "true believers" who bought into the whole madness, lock, stock and barrel.

I mentioned before the executive for a Federal Housing Authority program, who was making "good money" but had $50,000 in credit card debts, $2000 a month in car payments, and bought a $750,000 town house on a funny-money mortgage.  We knew this guy.  We've been to his house.  He drank the Kool-Aide - by the bucketful.   His whole life was leveraged to the hilt.   And his job was to advise us "little people" on how to buy a house.   Go Figure.

Guess how his life turned out?

But getting back to Steve.   He was making good money, so when a builder told him he could get in on the "ground floor" on a new condo development in Florida, for "only" $183,000, he signed on - using the same funny-money mortgages he was selling to other people.

He is fucked - proper fucked.

He still works for the same company, but since the glory days, his commissions and bonuses have been slashed - he makes 1/3 to 1/2 his former salary.  He lives with his parents.

Should he declare bankruptcy?   I told him to consider it, and he said "My family doesn't believe in that!" and that he was obligated to pay back the loan for moral reasons.

I would counsel him to at least consider it.  After all, that condo might not be worth $183,000 for a long, long time.   And in the time it takes to recover in price, he could be through bankruptcy and onto a new life.

But the question is, when should you consider bankruptcy?  There are a number of factors to consider.

The moral issue, is to me, a non-starter.   If you are avoiding bankruptcy because of "moral obligations" then you have your head firmly implanted up your ass.   The question of whether to declare bankruptcy or not is a strictly fiscal one, not one weighted with moral values.  To think of it in moral terms is to be  thinking emotionally which makes no sense at all.

On the other hand, if you are otherwise solvent, but thinking of declaring a strategic bankruptcy to run out on debts you can otherwise pay, well, then shame on you - you are being immoral.  And chances are, your name is Mitt Romney - or Donald Trump.   But I digress.

As an individual, if you are insolvent then it makes sense to pull the rip-cord and start over - and hopefully learn from the debacle and re-start your financial life.

But there are a number of questions to ask first:

1.  Are you insolvent?   This is a deceptively simple question.  Steve, my friend, is "making the payments" on his upside-down condo and still driving to work in his 9-year-old car.   But his net worth is a whopping negative -$100,000.   He is, by definition, bankrupt, even if he can afford the monthly cash-flow - for another 30 years.  This is presuming his car never breaks down, and his parents allow him to live rent-free for 30 years.

2.  Will Conditions Change?   Steve has a lot of negative equity in his condo - but condos fluctuate wildly in price, as I have noted before.  A friend of mine bought a condo in Arlington, Virginia in 1989 for $179,000 (!!) and it dropped in value to $60,000 when the market collapsed AND the owners sued the developer.  Years later, it rose quickly in the new bubble to $250,000.   It is hard to predict whether prices will rise and fall that dramatically.   But getting out from under $100,000 in negative equity is hard to do.  It could take decades.

3.  Are you under-funding your retirement or cashing in your 401(k)?  Many folks try to "hang on" as Steve is, by sacrificing their own standard of living, cutting back on their own expenses, failing to fund their own retirement, or worse yet, cashing in their retirement to fund an upside-down property or business.   Is it a bad idea.  While you may be "getting by" for now, when you are 60 or 70 years old, you will wish you had put that money into your retirement account.  Your 401(k) is one of the few assets protected from bankruptcy.  Cashing that in is suicide - idiotic -  as you have to pay a 10% penalty in taxes AND are out that money, when you eventually declare bankruptcy.

4.  Are there any ancillary issues?   If you have a security clearance with the government, for example, declaring bankruptcy can affect your job or career.  In Steve's case, the mortgage he is upside-down on is with the bank he works for.   If he walks away from that, it may result in his termination of employment.  Be sure to check these issues out and weigh them, before making a move.

5.  Will debts survive bankruptcy?   Bankruptcy used to be a "get out of jail free" card - where all your debts were washed away, and like with a baptism, you arose fresh and clean of all sin.   Today, such is not the case.  Student loans survive bankruptcy intact.  Credit card debts may be "worked out" in a payment period of five years (that is affordable to you).  Other debts may similarly survive.  You need to talk to a real bankruptcy lawyer (not some come-on advertised on the Internet) and weigh these factors!

In Steve's case, I would advise him to talk to a real Florida bankruptcy attorney (not some con artist who says he can "reduce your debts without bankruptcy" - because you can't and that is just a con).  Talk to several, if necessary.  Weigh the pros and cons and make an informed choice.

Steve instead is relying on emotional thinking - thinking that bankruptcy is an admission of defeat or shame or some sort of personal failure.   It isn't.  Our financial system was designed to give people a "second chance" when they get caught with their weenie in the wringer.   In Steve's case, he made a poor choice - buying a condo at the height of the market.   A bad choice, and he is paying the consequences.   But it might be a worse choice to continue paying, when our legal system allows a way out - at least partially.

The alternative is to pay off a loan on a property that may never, in his lifetime, be worth what he paid for it.   And as a result, he will live for decades in penury and deprivation - and worse yet, under-fund his own retirement - and end up a ward of the State.

No, bankruptcy is not a good option - nor should it be your first choice.  But delaying the inevitable by 5-10 years doesn't help you any - it just makes the outcome worse.

When the airplane loses a wing and starts to auger into the earth, you need to jettison the canopy and pull that rip-cord - and quickly.   Hanging on and thinking, "Well, we haven't hit the ground yet, maybe things will work out" is only to live in denial.  And every moment you delay is going to make things harder, not easier, for you.

Don't be ashamed of bankruptcy.  Don't be proud of it, of course.   But if you need to, do it, and get it over with, and start over.   And this time, learn from your mistakes.
Newer Post Older Post Home